While the Nationals and Astros duke it out in this year’s MLB World Series, the talk in the Northwest (aside from the Seattle Mariners’ losing record) is all about robo-pizza. Yes, during 12 Seattle baseball games this September, pizza was made a new way, and this innovative system could be coming to a stadium near you soon. But will fans bite into this new slice of life, or will they hand-toss the Italian dish into the nearest trash can?

According to a released statement from the Seattle-based Picnic, here’s what’s going on: “The compact, freestanding system integrates Picnic’s issued U.S. patent and other U.S. and international patent-pending modular, configurable equipment, with its software, cloud and deep learning technology. The platform can produce high-volume, customizable pizzas, made with any kind of ingredients, consistently and sequentially, at a rate of up to 180 18-inch or 300 12-inch pizzas per hour.”

Currently, it’s estimated that 13% of the U.S. population consumes pizza on any given day (yours truly included—on Wednesday, thanks to Karvelas Pizza, and Your Pie tomorrow at trivia).

So it would seem that pizza has replaced hot dogs, peanuts and Cracker Jack at the ballpark.

In fact, at my first and only World Series, as a 14-year-old kid, I got to see the Detroit Tigers play the San Diego Padres. The Tigers were owned by Domino’s Pizza founder Tom Monaghan, and the Padres were owned by the Kroc family of McDonald’s fame. At this “Fast Food World Series,” I remember we could order a pizza and have it delivered to our seats. Imagine that! Suddenly, pizza at the World Series was a reality. And now, thanks to AI, cloud computing and deep-learning technology, it wouldn’t surprise me to see robo-pizza conquering the market and making its debut at the Super Bowl, College Football Playoffs and other major sporting events.

To find out more about this pizza-making technology and robo-pizza’s pilot program with the Mariners, Observer chatted with Steve Dominguez, the regional vice president at Centerplate, who curates the food and beverage experience at T-Mobile Park in Seattle.

First off, why bring robot-made pizza to the Mariners’ T-Mobile Park?
Working with Seattle-based startup Picnic, this market is ripe with innovation and technological prowess, so we knew our fans would be receptive to exploring something new. Picnic is the company that’s created this technology, and what better spot for a pilot program than a crowded baseball stadium that churns out hundreds of pizzas each game. We saw it last February in their lab and thought it was pretty cool. The device has an automated arm that lays the pizza on the assembly line, adds the sauce, the cheese, the toppings, all by order from an iPad. From about three minutes after they opened the app on the iPad, we were having pizza, and we felt it had application for our ballparks and other lines of business.

What was the reason for the new technology? Where’s the inefficiency? Is it in the delivery, the making of the product, the cost of employee wages and health care, or something else?
What most impressed me was the unit’s potential to turn out a large volume of pizzas in a consistent manner in a short amount of time. It’s no secret that the hospitality industry is in the midst of a labor challenge. The key piece for us is the consistency, as the goal isn’t to go from 1,000 employees to 600, but rather to integrate automation into the workforce to help ensure a consistent product for our fans, especially when we can’t fill a full staff… It takes a level of training to get to that perfect product, that consistency. What we do is try to find a solution to bring that perfect product, even if we are short-staffed on a given night.

Is there a concern about replacing workers… which would eventually replace consumers? What role do humans play within the Picnic and Centerplate robo-pizza partnership?
There is still human involvement in the pizza-making process, so this is not about replacing workers at all. It’s more about fine-tuning a preparation process and enhancing the end product for the fan. The dough preparation, sauce making and baking—the real art of pizza—is left in the hands of our human employees. And, Picnic also has an engineer onsite to ensure everything goes smoothly.

How does this technology avoid a “quantity over quality” product? Can you tell the difference?
The pizza, most importantly, tastes great. And there is more consistency with doling out the proper ratio of cheese, sauce, pepperonis, etc. Pizza has become a ballpark staple for us, in Seattle and many other markets we serve. 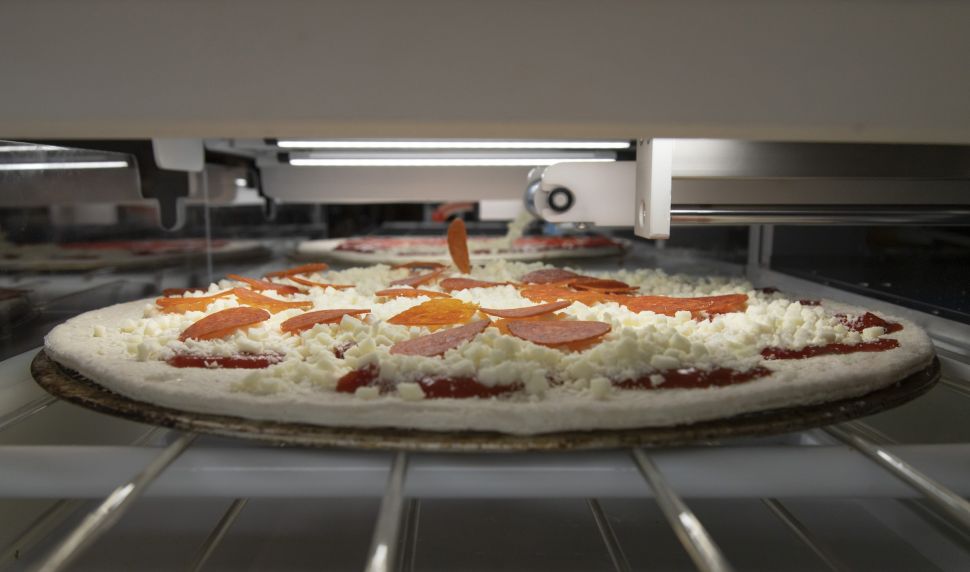