They call Maxlimer a robot ship. But a more apt name could also be a ghost ship. Why? Because if you came across it during one of its seafaring journeys, no humans would be onboard.

It almost sounds like the plot to some new Ridley Scott sci-fi movie that could be called: Robot Ghost Ship.

Maximer, though, is a ship that can be found in reality, and it’s totally 100% robotic. And yes, Maximer is much, much larger than a bathtub toy. In fact, this unmanned surface vessel (USV) is set to be the first vessel of its kind to cross the Atlantic… sans human beings.

The voyage is expected to take about 35 days and could prove that ships never really needed humans in the first place. (Stupid humans.) The USV could also open the doors for fleets of new oceangoing drones consisting of crewless (not clueless) cargo ships, unmanned oil tankers and robotic work boats.

The maritime tech company, Sea-Kit, based in southeast England, is the crafty bugger behind Maxlimer. Sea-Kit’s business model includes netting lucrative contracts in support of offshore oil and gas drilling.

Sea-Kit aims to produce a flexible ship that’s cheaper and safer than its manned-ship counterparts with the capacity to sail at a speed of eight miles per hour and potentially with a stretch of nine months of sailing time.

Sure, USVs could be good for the environment by reducing our carbon footprint, cutting major costs (ship bunk beds costs for one, along with , air-conditioning and snacks) and reducing the risk to humans in dangerous jobs/missions/journeys. Another plus: without a human crew, more space can be devoted to equipment, which could include a fleet of smaller drone boats and submarines for salvaging missions.

Maxlimer is operated via a hand-held remote control when in harbor. When it’s out to sea, the USV has the capacity to live stream data to the controller through multiple satellite links.

“The controller here in this station can actually see all the way round on the horizon near real-time,” James Fanshawe, a director of Sea-Kit, told Reuters, “and in many ships, it’s quite difficult to actually even see what’s behind you from the bridge of that ship.”

Sea-Kit’s chief operating officer Neil Tinmouth recently told the Daily Beast that Maxlimer’s intrepid journey across the Atlantic is on schedule to start during the first half of 2020, calling the ship a “game-changer.”

All good, of course, and nothing to fear here with unmanned robotic boats—as long as there’s a human hand somewhere involved, and these USVs are not operating purely as through artificial intelligence (AI), especially for military combat purposes. Because, remember back in March of 2018, when Elon Musk addressed a crowd at SXSW by stating, “Mark my words—AI is far more dangerous than nukes,” in regard to AI killer robots (i.e., weaponry).

Earlier this year, President Donald Trump expressed his 2020 military budget proposal wish list of $143 billion, part of which would go to robot warships and robot subs to fight China.

For now, Maxlimer seems posed to do good work in the short run, but let’s hope the technology keeps on a steady course and doesn’t foster the fears of Musk. 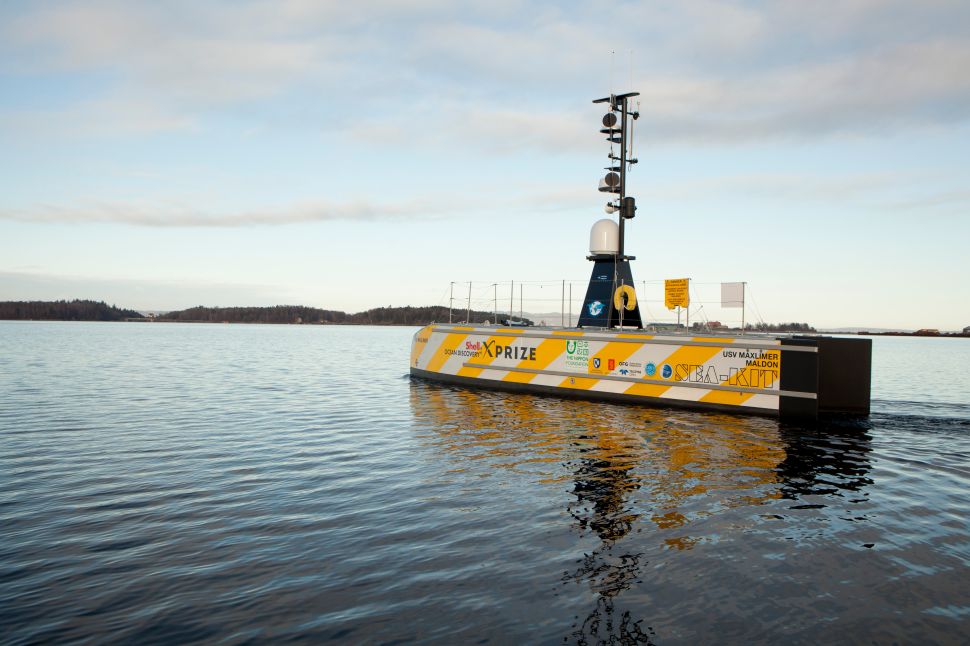