Marc Benioff, the chairman and co-CEO of Salesforce and possibly America’s most woke billionaire, believes the U.S. government should do what many scholars and critics have called for and break up Facebook—a hugely profitable company that Benioff blasted as morally bankrupt and unscrupulous.

“Facebook is the new cigarettes. It’s addictive. They’re after your kids,” Benioff told CNBC’s Jim Cramer on Wednesday, part of a battery of interviews Benioff did ostensibly in support of a new book—and to promote his vision of a new type of “compassionate capitalism” that he outlined in a New York Times op-ed on Sunday—that became a ringing, stinging critique of his fellow (but much more powerful and evidently far less woke) billionaire tech mogul’s company.

SEE ALSO: What Breaking Up Facebook Would Entail, According to Experts

Facebook lacks “a commitment to trust and truth,” Benioff added, echoing a call made in March by U.S. Sen. Elizabeth Warren, one of the frontrunners for the 2020 Democratic presidential nomination, that the company has amassed too much power. “Facebook should be broken up. They’re using these assets [that is, its users’ data] in a way to further manipulate even more people.”

Benioff went further. He blasted Facebook for its technique of scooping up other companies—Facebook properties WhatsApp and Instagram are only the most prominent—and merging those companies’ data into Facebook’s own massive trove of information about its 1.59 billion-plus users. And he’s not so keen on Facebook CEO Mark Zuckerberg’s continued insistence that political ads containing outright lies can appear on the social network.

Facebook has, for almost a decade, been in some form of trouble with the government and yet has not changed its behavior. Facebook negotiated a consent decree with the Federal Trade Commission (FTC) in 2011, after agreeing that it had mishandled user data and misled users about privacy.

In July of 2019, following the Cambridge Analytica scandal (and allegations that fake news spread on Facebook helped swing the 2016 election to Donald Trump and sparked genocide in Myanmar), Facebook agreed to pay the FTC $5 billion for violating the consent decree. Meanwhile, the company continues to post record profits—and, according to Buzzfeed News, appears to enforce its own policies erratically and unequally.

This has fueled growing demands in Congress and elsewhere for the government to wield its anti-trust powers and do to Big Tech—a broad rubric generally meant to include the “Big 5” of Apple, Facebook, Google, Amazon and Microsoft—what it did to the telephone, oil and steel monopolies at various times in the 20th century: either break up the companies to diffuse their power or use regulation to blunt it.

In a speech given at Georgetown University on Thursday, Zuckerberg said he briefly pondered banning Facebook ads but decided not to, erring on the side of “more expression” or more speech. (At the same time, Facebook has deplatformed some speakers, mostly notably Alex Jones and InfoWars, for spreading false claims.)

Benioff told CNN that there was “no question” he would ban ads that contained lies and also highlighted what others have identified as the heart of the matter—Section 230 of the Communications Decency Act, which indemnifies internet companies from responsibility for speech on their platforms.

As for what a “broken up” Facebook would resemble—or who would do it—Benioff did not say. But “[o]n these platforms, it’s well documented what’s happening,” he told CNN. “And this cannot continue. It is deeply affecting our society.”

We need a new capitalism that is more fair, equitable & sustainable that values stakeholders as importantly as shareholders. Business is the greatest platform for change where purpose can rise above profit & we focus on improving the state of the world. pic.twitter.com/FpZ4yryobF 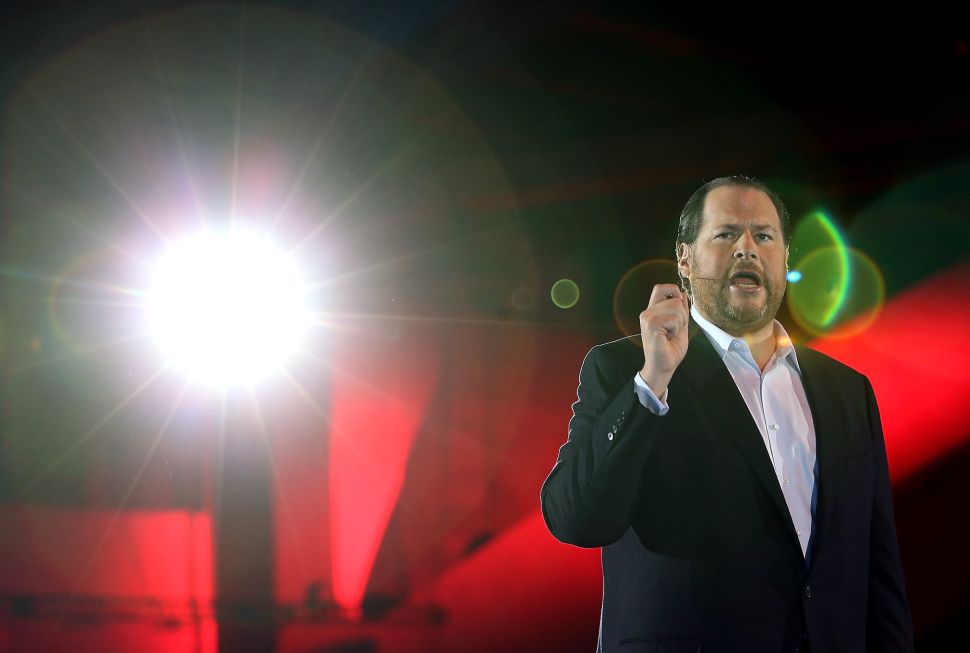