San Francisco: I love you. And I hate you. I used to live in the City by the Bay, and I witnessed the whole trajectory course of run amok tech that ignited a fury amongst citizens only seen this side of a Google bus protest.

Sure, Market Street in downtown San Francisco, is now the home of Twitter Dolby, and Uber headquarters, but mere blocks away homeless people are living in mass in tents on the streets of the Tenderloin. This dance of the haves-and-the-have-nots—existing side-by-side—creates a cacophony of smug entitlement vs. screaming at the midday sun in anger.

SEE ALSO: Bubble or Boom? 2-Year-Old Scooter Startup Bird Is Now Worth $2.5B

And I’ve seen it happen.

Take the roll-out of sharable electric scooters. In March of 2018, the idea was for an alternative form of public transportation, allowing San Francisco citizens to merrily roll along to their million-dollar startup jobs with the grin of a moron plastered on their faces. Bird, Spin and Lime were three companies that wanted to jumpstart the San Francisco sharable scooter craze. These dockless scooters appeared almost overnight. The only problem was that the scooters became a pure public nuisance.

“GET OUT OF THE WAY!” idiots would often yell, as they illegally rode on the sidewalks.

The scooters cluttered sidewalks and blocked pedestrian walkways. A great allegory for this reckless tech roll-out; it was reported that homeless people were setting the scooters on fire, along with throwing them in the San Francisco Bay. The “haves” had their irritating scooters; the “have nots” were lighting them into flames.

The San Francisco scooter craze was a pure train wreck. The thrill was gone. All three companies received cease and desist letters from the city attorney. Further, because of these dumb scooters, the city also passed a law, demanding that these devices must have a permit

What did San Francisco learn from this debacle? How would the city prevent electric scooter history from repeating itself?

Just last week, president of the San Francisco Board of Supervisors Norman Yee had a cunning plan. He unveiled a proposal to create an Office of Emerging Technology. Yee told KQED News that the office would be the first of its kind in the country.

In summary, the purpose of the office would be to prevent another reckless tech roll-out—like what was seen with the electric scooter fiasco—making sure the next wave of tech services obtain the proper permits to operate on San Francisco’s streets, sidewalks and other infrastructure.

And Yee has already secured $250,000 from San Francisco’s current fiscal year budget to fund the new office. Besides issuing permits, the Office of Emerging Technology will also weigh the potential impact of proposed technology before giving pilot projects and/or product launches the green light.

So a tech company that has developed, say, a robot dog walking service (actually not a bad idea), can’t just pop up overnight and roll out its tech service on the city streets—without getting the green light and proper permits.

Some of the recent tech roll-outs just trumpet problems that need to be addressed. In 2017, Knightscope K5 autonomous security robots were deployed on the streets of San Francisco to ward off homeless people emcampments. But some of these robots were being operated in public without permits. And people hated these security robots; there were reports of folks knocking them over or dousing their sensors with barbecue sauce. One poor robot was veiled with a tarp. Another was covered in poo. (Ewww!) And the irony? The cost of the five-foot-tall, 400-pound Knightscope K5 security robot could have been put toward opening additional, and well-needed, homeless shelters.

Meanwhile, its good to see the City of San Francisco spend $250,000 on making sure people aren’t annoyed by electric scooters while they whizz by the city’s increasing homeless population. 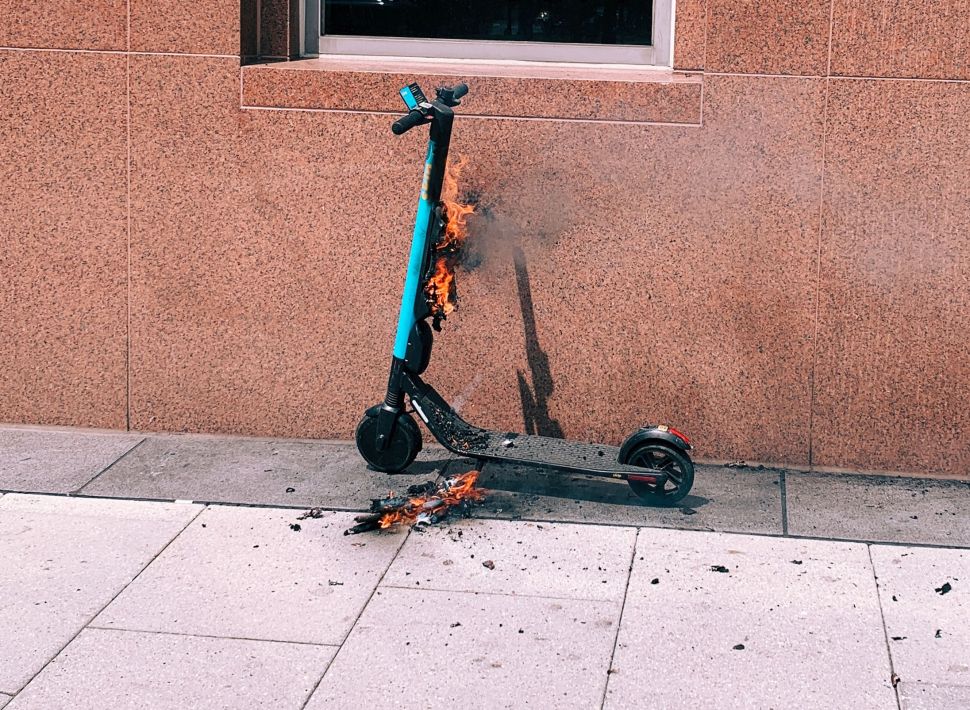