Few movies about sports are more popular today than Moneyball, in which baseball organizations use analytics to learn more about who really are the best players on the diamond and what it takes to win. Thanks to a vendor called Satisfi Labs, we’ll soon know just as much about those who attend games as Brad Pitt (playing Oakland A’s general manager Billy Beane) and his staff learn about their players in the 2011 hit film.

And the factoids that Satisfi has learned are almost as shocking as some baseball trivia itself.

Learning About Fans From Computer Conversations

Earlier this month, Satisfi Labs, a Major League Baseball (MLB) partner since 2016, announced a big league partnership expansion to work with individual MLB franchises to use voice AI (artificial intelligence) to sell tickets directly from teams to the fans. “These are primary tickets,” Satisfi CEO Donny White told Observer. “Thanks to purchasing with our app, [teams] can now understand more about their fans and enhance the fan experience.”

In addition to helping “wind up” ticket sales across the country, baseball teams from the Atlanta Braves to the Washington Nationals are learning more about their fans. Just like in Moneyball, the company is using data to dispel erroneous myths about what game attendees want.

“People think it’s easy to size up fans, but fan needs are wider than the market thinks,” White added. “Expectations are much higher. That’s why you see barbershops and rock walls for climbing at baseball stadiums.”

What Baseball Fans Really Want: Is It Just Peanuts and Cracker Jack?

“The number one question fans have is about ticketing, followed by food and amenities,” White noted. “A distant fourth is a series of statistics about the opposing team. They don’t want peanuts and Cracker Jack. And they have very specific ideas about what they want.”

For example, fans generally don’t see frozen yogurt and ice cream as the same thing, and they definitely won’t buy the alternative, the Satisfi Labs CEO pointed out.

Before Satisfi Labs, most sports teams didn’t realize that people approach ticket purchases in very different ways. Some, on a budget, want no particulars, no seating chart, just the lowest price. Others will only buy if the best seats in town are available. Still others only care about who the opponent is, not just because they might cheer for the visiting team, but because they like the rivalry.

White asked me what I thought was most important about beer to fans. “Is it the type of beer available?”  No, it turns out that most fans care about how close the beer—any beer—is to their seat (roughly two-thirds). They want it cold and quickly refilled. And teams are now working to solve that problem.

I asked about the most surprising conversations people tend to have with the AI assistant. “You’d be shocked how many people ask the machine to go on a date,” White laughed. “For example, somebody just gets told where the nearest beer is, and they ask the assistant to join them.” It’s similar to the 2013 movie Her starring Joaquin Phoenix, in which he falls in love with an AI voice, delivered by Scarlett Johansson.

Does that mean people don’t realize there’s not a real person on the other end answering all of their questions? “A number of people say ‘thank you’ to the machine,” White elaborated. “Also, a number of people will ask a question, like whether or not the Braves will win or lose.”

The Personal Touch in an Artificial Realm

Though the MLB App is available for a number of baseball teams and their fans, that doesn’t mean it’s a one-size-fits-all operation. In fact, Satisfi Labs came up with a way to work in Atlanta Braves iconic usher Walter Banks, who was been with the team since 1966.

“We have Walter Banks provide Braves statistics, combining our technology and his brain, in AI,” White explained. “We took his 99 facts and put it in the app.”

Type in a number, from 1 to 99, in the “Fan Assist” chat window on the MLB Atlanta Braves Ballpark App, and you’ll get one of Banks’ trivial facts, with a twist. If you type in “6,” Banks will reveal: “There are six zeroes in a million. Bobby Cox wore #6, and he’s one in a million.”

Doing the same for “14” will inform you that the Boston Braves won the 1914 World Series and that the number 14 was worn by fan favorite Andrés “Big Cat” Galarraga in the 1990s, as well as ageless wonder Julio Franco, who played well in the postseason a few years later. Banks’ facts will bring a smile to the faces of fans who remember and teach some unique history to new Atlanta Braves followers. “He’s a real fascinating guy,” White added.

So was it the baseball fan who got into business, or the other way around?

“I come at this from a 100% business perspective,” White said. “I was looking for information in the market that is hard to get form a search engine. I became fascinated by how many people at Shea Stadium (the New York Mets’ former stadium) were looking for “Bacon on a Stick.”

Of course, that doesn’t mean that the sports side hasn’t hooked him. The former Little Leaguer-turned-baseball business entrepreneur has three girls who play the sport… of field hockey.

But does Donny White cheer for one team? “Our affinity is to the fan,” he insisted. “And we don’t root against the customer.” Now that’s the best business pitch sports can buy. 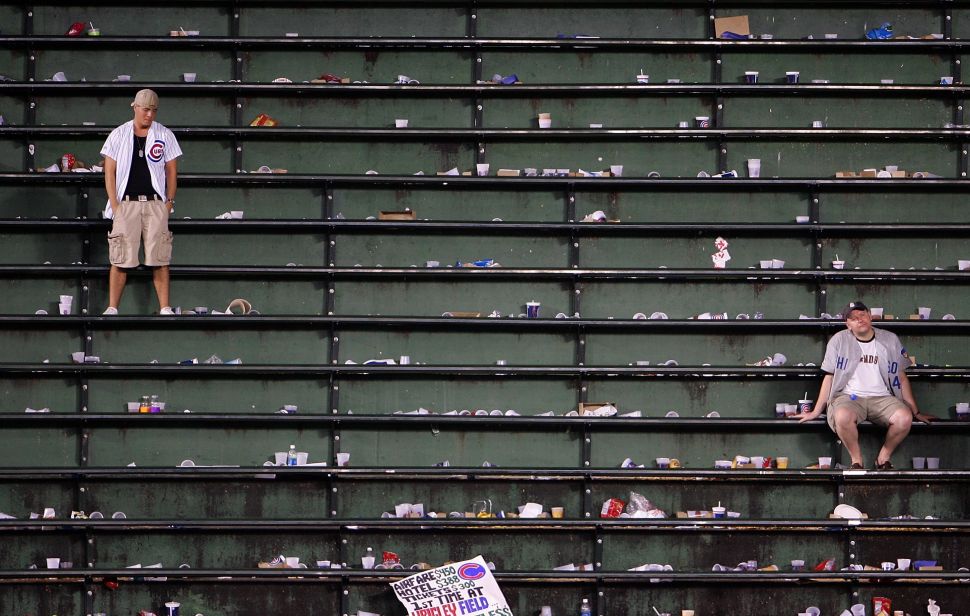