Young audiences at Jeremy O. Harris’ Slave Play—a campy satire that swerves into tragedy about interracial couples poisoned by white supremacy—are getting their minds blown. And that’s great. They’re discovering that a Broadway play, far from being exclusively white, repressed and boring, can be as wokely irreverent as Dear White People, as harrowing as Us and as robust as last semester’s intersectionality seminar. Buffed to high sheen by director Robert O’Hara, Slave Play is savvy, glossily packaged stuff. I hope it draws record numbers of young people. I also hope they come back to see a second show.

That way they’ll learn Slave Play doesn’t exist, sui generis, in a vacuum. Anyone who has followed downtown theater for fifteen-plus years knows the tradition from which it emerges. Thomas Bradshaw (Burning) has gleefully demolished more racial and sexual taboos, and more offensively. Young Jean Lee (Straight White Men, The Shipment) has staged and dissected racist pathologies with at least equal rigor and empathy. And Anne Washburn, among others, has been breaking the theatrical frame and de-centering character and speech act since the frickin’ ’90s. Mind you, Harris is quick to acknowledge his artistic forebears, and others going further back. It’s just important that those who celebrate his splashy debut contextualize the discourse, as one of Harris’ braying research scientists might put it.

Next, in “Process,” these six characters are revealed as contemporary couples doing slavery-era role-playing as therapy for relationship issues. Teá (Chalia La Tour) and Patricia (Irene Sofia Lucio) are manic, psychobabble-spouting therapists investigating “Racialized Inhibiting Disorder”—sexual dysfunction and mental illness in people of color resulting from centuries of inherited racial trauma. The big joke in this group-therapy session is that, although the focus is on the partners of color, it’s the white counterparts who dominate the conversation, with their bottomless, privileged narcissism. Toward the end, Kaneisha, seething with impotent disgust over clueless Jim (cold, British, controlling), can take no more. “You’re a virus!” she screams at him, before collapsing on the floor in a hyperventilating mess.

The final section is a nightmarish, erotic, deeply disturbing scene as Kaneisha packs to leave. Jim comes to her room, promising to listen, to stop talking. This part, “Exorcism,” is a deep dive into their relationship, how Kaneisha was attracted to the exoticism of this Englishman, how their sexual compatibility and domestic bliss curdled three years ago. A fog lifted, she tells us in a long, painful monologue, and she suddenly saw Jim in a harsh new (historicized) light. “You were white, a flesh and blood white,” Kaneisha says, “a demon that I didn’t know, and I was scared. I was scared for my life.” The most genuinely affecting and personal scene in the play, Harris explores, in precise, heightened language, a particular kind of sexual panic and paranoia, desire corrupted both in appetite and consumption, where our very skin betrays us. Kalukango is wonderful in the scene, a raw nerve twitching and recoiling with every gentle touch from Nolan. I’ve already spoiled enough action; I won’t reveal the pitiless logic of racialized sex and power that governs the brutal ending.

Slave Play’s code-switching, tone-shifting framework is the best thing about it—in addition to its hard-working, appealing cast and O’Hara’s sly, comical direction. The actual line-to-line writing, while animated and playful, contains off-notes and lapses that do stick out. In the opening scene, Jim’s plantation owner confuses a cantaloupe for a watermelon, which is played for a laugh, but really, how many people couldn’t tell the difference? The long therapy scene in the middle goes on far too long, and the explosive revelations between the couples seem designed more for hysterical outbursts than to deepen their solidity as people. This is the sort of play that expects you to believe that over several years, a mixed-race couple never or rarely discussed their personal histories or social issues. Which kind of means that Slave Play is about three shallow interracial couples who (may) break up, without anyone caring that much.

This is a young person’s play: overwritten, easily distracted, a bit glib, more concerned with effects than showing a complex journey to truth. Critics are supposed to review the show they saw, not the one they didn’t. However, I can’t help but imagine a different organism Harris might have created, one about a couple undone by hateful ideologies beyond their control, how centuries of prejudice and violence drip like acid on bonds of love. Such a play would have intricately detailed characters and subtle psychology; its plot would engage a range of sympathies and build to climax; it would devastate us and leave us in tears. (If tears are a good thing; if catharsis isn’t co-option.) Yes, it also might be dreadfully old-fashioned: Ibsenish or Williams-esque, wide open to claims of being, well, too white and bougie. Harris’ dramaturgical approach to these issues is lively, anarchic and, when not horrific, undeniably fun. Let’s stand for that, even as we wait to see how he furthers a legacy he knows intimately well. 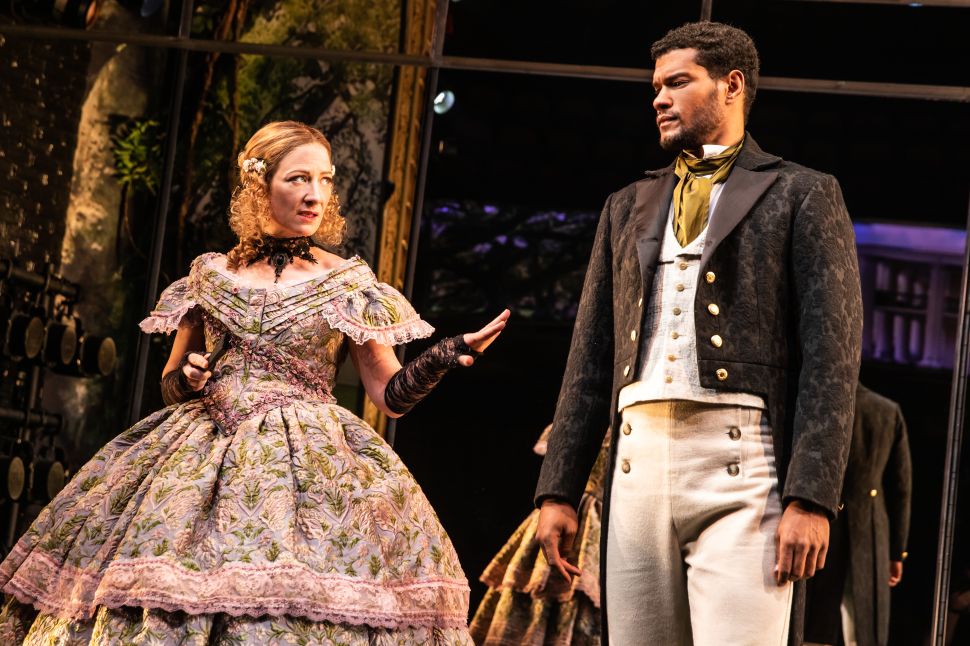