Before walking into the bracing, deftly subversive “play with a musical” by David Henry Hwang and Jeanine Tesori, I had a vague understanding of “soft power.” (Some critics like to project effortless erudition, but we all Google.) The geopolitical term is quite specific and has recently been in the news. Perhaps you heard about Houston Rockets manager Daryl Morey tweeting in support of antigovernment protesters in Hong Kong? An irate China responded by boycotting sponsorships to the tune of $25 million and cancelling broadcasts of Rockets games in the country. The loss of revenue in a market of 1.4 billion potential customers led to the NBA and its players stifling free speech. In the past century, American blue jeans, movies, and pop music exported democratic values to repressive regimes—the “soft power” of beloved cultural products. Now capitalism holds its tongue to increase profit and not offend dictators. Who’s soft now?

At the Public Theater, Hwang and Tesori aren’t interested in sports but the Broadway-style musical—another global phenomenon. In one of this cunningly structured piece’s framing devices (I counted three), Hwang puts himself in the story, walking home in Brooklyn one day after the 2016 election and freaking out about the future of his country. The seasoned playwright is rendered as a sweet, flustered mensch by Francis Jue. The scene abruptly shifts to the Manhattan office of Xūe Xíng (Conrad Ricamora), a Shanghai entertainment executive who wants to hire Hwang (“DHH” in the script) to adapt a popular Chinese film into a musical. The movie’s plot involves a married couple for whom the spark has faded, who yearn for other partners but, in the end, stay together. The title, Xūe helpfully translates, means “Stick With Your Mistake.” DHH is politely appalled, and suggests a more idealistic (American) ending, where the couple break up and find love elsewhere.

Xūe has doubts—even though he has a wife and child in China while he dates an American actress, Zoe (Alyse Alan Louis), his “assistant.” DHH, Zoe, and his potential boss then attend a performance of Lincoln Center’s The King and I, a fundraiser for then-Presidential candidate Hillary Clinton. DHH is newly disturbed by the colonialist, orientalist overtones of the Rodgers and Hammerstein classic, while Xūe is smitten after a brief meeting with Hillary, although he remains dubious about our voting system and hollow talk of freedom. Next comes the catastrophic election, and a scene in which Xūe tells DHH that his rewrite won’t work, and we loop back to DHH on the streets of Brooklyn, when he is suddenly stabbed in the neck. The incident is based on real, unsolved crime in Hwang’s life: His vertebral artery was slashed by a stranger as he crossed a park in Fort Greene. Hwang lived, but the incident haunted the playwright and—as any self-respecting writer would—he turned it into fiction.

As DHH bleeds into his shoes and staggers against parked cars, dragging himself to the nearest emergency room, he hears an enormous string section tuning up, and suddenly the piece (which, we’ve mused, had been going quite long without a song) opens up into a Rodgers-and-Hammerstein pastiche, courtesy of the multifarious composer Jeanine Tesori. The cast are arrayed in smiling, sequined squadrons (over-the-top uniforms and frocks by Anita Yavich) as Clint Ramos’s versatile set slides away to reveal banks of violinists and other musicians bathed in rich red and purple lights (by Mark Barton). “I’m at the Dragon Palace Theatre. In Shanghai,” DHH gasps through the fog of plummeting blood pressure. “And now, I can finally see it. The show Xūe’s been wanting me to write! A King and I, but from China’s point of view.”

Now it is the heroic, pure-of-heart Xūe who leaves his native country to travel to barbarous and strange America (cue hip-hop style beats), where everyone is blonde and waves a gun. Our dauntless hero comes face to face with the nation’s would-be “King”—Hillary (Louis again). Their intercultural romance—which begins at a fundraiser at a ridiculously opulent McDonald’s—will blossom into an affair that might save America from itself. Then comes the election (the electoral college is explained in a hilarious hoe-down group number), the horrifying result and, again, DHH’s stabbing on the street, this time from a rioting MAGA crowd. “I am a fake / Not Chinese. Not American,” DHH sings as he dies on the street. “Half and half doesn’t always equal one.”

More head-spinning twists come after intermission but suffice it to say that we are watching American history through a funhouse mirror that turns DHH’s interaction with the Chinese producer and the election of Trump into a crazy cartoon of cultural appropriation and mistranslation. Somehow the writers of the musical-within-a-musical assume that the Golden Gate Bridge is located somewhere off Manhattan, and their stock American hooligans are named “Randy Ray” and “Bobby Bob.” When Xūe goes to Washington to talk sense to the nativist new administration, which threatens war with China, the office of the Veep (Raymond J. Lee) is filled with obese, besuited men waving assault rifles. As Hwang and Tesori’s Hammerstein-esque lyrics go: “It’s time to get real tough with folks / So’s we can liberate ’em / “Drop our bombs to help ’em / And not because we hate ’em.”

Subtle, it isn’t. But the cast is extremely talented with sensitive, layered work by Jue and Ricamora. (In a series of small but pungent roles as louts or heavies, comic bullyboy Jon Hoche angles for scene stealer of the season.) Louis does a lot of heavy lifting as the desperately perky then soul-crushed Hillary, with coloratura vocals penned by Tesori to show off her young-Chenoweth talents. Tesori’s score skitters and splinters to fit each occasion—into pop, Golden Age show tune, or Otis Redding-style soul—which it must do, even if that means it lacks the satisfying, cohesive impact of her Fun Home.

Directed with the right balance of dry wit and shameless razzmatazz by Leigh Silverman, Soft Power boasts one of the most appealing and hard-working ensembles onstage today and it’s consistently engaging and amusing. Still, for all its wit, structural sophistication, and still-resonant political punch, I couldn’t help but wish the material had more heart. Hwang’s anxieties about race and nativist violence are threaded through the play, but their emotional impact is diluted by rampant satire and grotesquerie. The romance between Hillary and Xūe adds a little heat and sugar, but that too is buried under the comedy and cross-cultural critique. For a work about the dysfunctional economic and diplomatic marriage between America and China, I almost think the creators intentionally arranged a problematic union between a play and a musical: a running battle between hearts and minds. One thing is sure: Soft Power is too weird and freethinking to fill a giant state theater in Shanghai. It may tickle those interested in new musicals, but I doubt it will convert the masses. 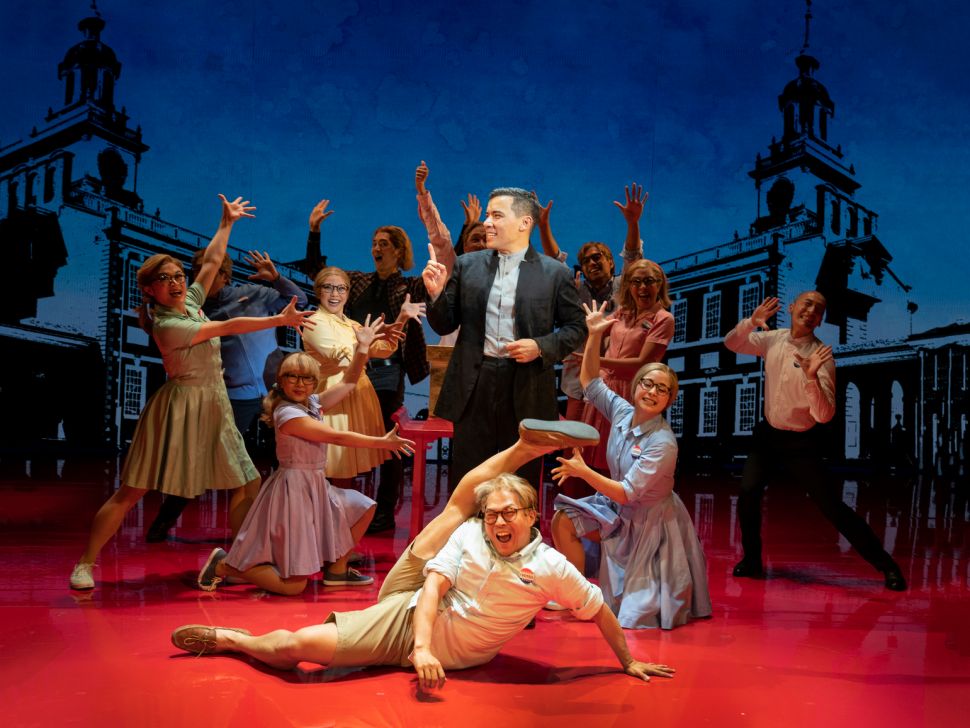