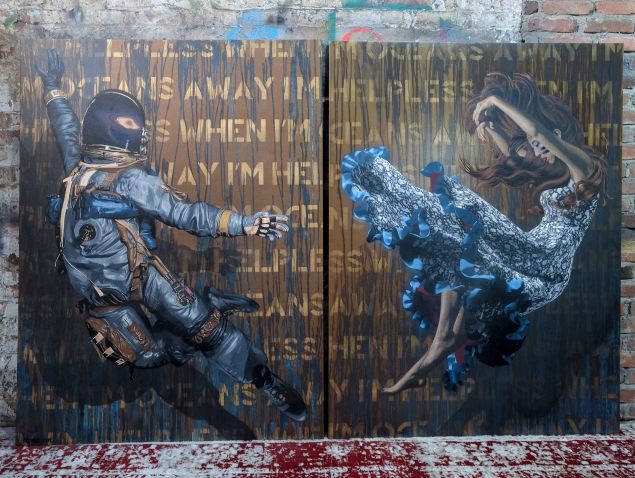 From painting during childhood to taking extra-curricular art classes in high school, B.D. White always had a desire to make art. But outside of his artistic endeavors, athletics was his other high school passion. A few days before graduation, while at a Junior Olympic competition, White was injured when attempting a pole-vaulting jump. The resulting injuries would leave him paralyzed, using a wheelchair for life.

It was his creative pursuits that he poured his time and emotion into from then onwards, moving to New York in 2010 with the goal of turning his passion into a profession. But the barriers to entry proved to be greater than he had anticipated. “At the time I wasn’t in galleries, and no gallery would talk to me,” White told Observer during a recent conversation, “So I didn’t have any avenue other than friends and family to show work.”

SEE ALSO: Basquiat’s Days as a Struggling Artist Are Revealed in a Movie Featuring His Celebrity Friends

After failing to get his work on dealers’ radars, White decided to take another route: street art. Inspired by the works of Shepard Fairey and Banksy, he began contributing hundreds of pieces to the sprawling New York street art scene.

“I like having that audience, because everyone that walks down the street is now your viewer.”  White said. But his work was reaching those passersby from a space not regularly home to tags and stenciled imagery. “I couldn’t climb ladders or get on roofs and do buildings that way, or run from the cops or any of that kind of stuff…But I adapted and said I’ll do all these lamp-post bases right at ground level.”

Soon, lamp-post all over Williamsburg, Brooklyn, began to be covered in intricate stencil art with thought-provoking political messaging and social commentary. A sizable social media following for White followed not long after.

White calls his specific style of street art “mindful vandalism,” because while it is vandalism, the intention is not ego driven or to deface or simply change an object of community infrastructure. Rather, he tries to contribute something that is additive. White is no longer producing illegal work in the streets of New York. (“I don’t want to get arrested. I’m older now.”) But he does want to continue to use public spaces as his canvas—legally—and the exposure his early, renegade works brought has allowed him access into a world that previously shut him out.

His latest show, “Reflections of Always,” opens on October 30 at 319 Grand Street on New York’s Lower East side, and now he partners with organizations like the LISA Project (a New York based nonprofit aimed at creating a mural district in lower Manhattan) to make his street art.

Through his work with the LISA project, White has brought his signature lamp-post paintings to Little Italy in a collaboration with fellow artist JPO. He has also contributed several murals to the endeavor.

White’s fine art creations significantly differ in tone from his earlier street work, which was a deliberate decision by the artist to make his work more appealing to collectors. And he wanted to make sure some of it could stand the test of time—in content as well as location. “Political work just doesn’t age well. You’ll make a political piece and it’s great in that moment…It’s great for street art because you’re trying to portray a message or help a cause…it’s an issue right now but 10 years from now? It’s not.” 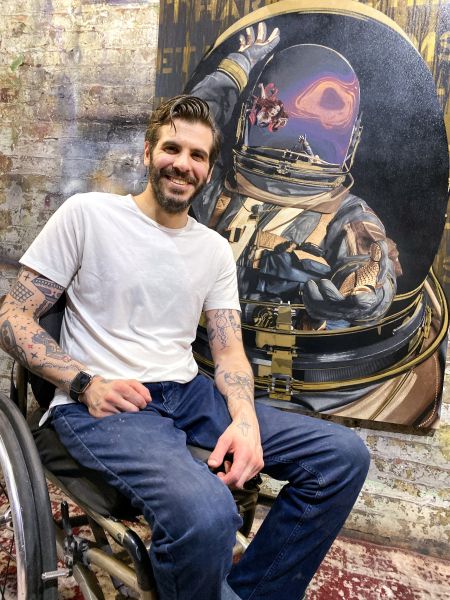 The decision to change the subject matter of his work was also influenced by a desire to create a more universal and relatable experience for the viewer and to inject more of his experiences into what he was creating. “I wanted to make it timeless, and at the same time, related to all I was going through with issues in relationships in my life.” His 2017, show “Love, Loss and Longing” was inspired by his breakup with his long-term girlfriend.

To convey what he was going through, he relied heavily on an image that can mean many different things: that of an astronaut. Triumph, loneliness, exploration, isolation: the potential symbolism is boundless. What White really connected to was the element of “hiding away and not showing your face.” Of never seeing the real person behind the suit.

In for the work in his latest show, White is telling a different story. “At the time I was still broken up with my girlfriend that I was heavily in love with. And I was trying to get back together with her and we were starting to talk again,” he explained of the works. It’s show imbued with nostalgia, desire and reconciliation.

Here, you can see White pushing stencil painting to new heights. Using photos of friends and models for reference, White has focused these works on the female form. Every color is separated into its own stencil layer, averaging more than 200 layers per work and up to 1,000 hours of labor. The result is a set of stunningly realistic portraits.

It has taken two years for him to create the 10 paintings in the upcoming show, and White acknowledged that his level of dedication can be seen by some as bordering on obsessive. “I mean yeah it completely defeats the purpose of stencils the way I do it,” he said. But for him, the payoff is in carving out a space for himself. “No one else does this—there’s no one else that’s really doing the insane layer count that I am and producing the same kind of realistic results.” 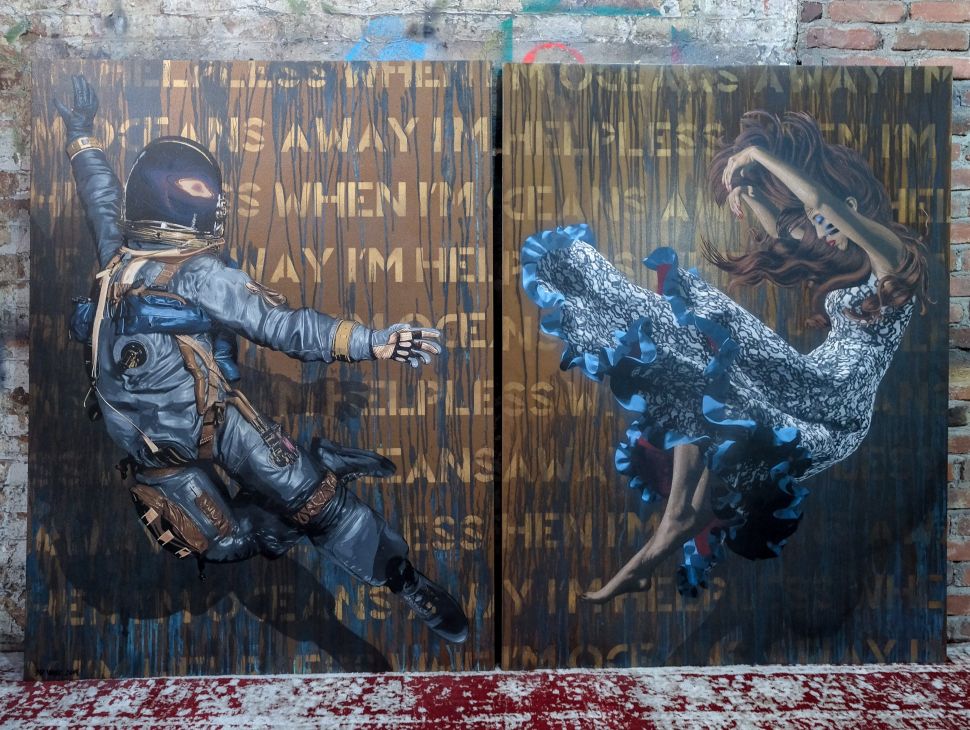