How art travels around the world, away from its place of origin, is a process that’s received much attention recently as governmental investigative bodies work to return looted artifacts to their rightful owners. Tomorrow, the Metropolitan Museum of Art will launch an exhibition called “Rayyane Tabet / Alien Property” that will examine the specific process of transference underwent by ninth-century B.C.E. stone reliefs that were excavated from Tell Halaf, Syria at the beginning of the 20th century by German archaeologist named Baron Max von Oppenheim. The Met’s four reliefs eventually came to be in the museum’s possession due to the World War II–era Alien Property Custodian Act, and in order to tie the artifacts to the present, the exhibition will also center on charcoal rubbings made of the reliefs by the contemporary artist Rayyane Tabet.

The reliefs themselves date back to the Neo-Hittite period and were excavated from Tell Halaf, an archaeological site in northern Syria that was once a city-state called Guzana filled with elaborate palaces and temples. The artifacts were largely slabs carved in low relief that were positioned throughout those ancient structures, and they are decorated with fantastical designs that illustrate hunting scenes, horse-drawn chariot pursuits and more mysterious scenarios involving lotus blossoms and sun discs. These designs were carved into a variety of different stone types, basalt and limestone amongst them.

In the 1930’s, Max von Oppenheim brought eight of the reliefs he had begun excavating in 1911 to the United States. In 1943, American authorities confiscated them after deeming them “enemy property,” after which point they were soon bought by the Met from the Office of the Alien Property Custodian. Decades later, Rayyane Tabet became interested in the reliefs because of his great-grandfather Faek Borkhoche’s story: Borkhoche was hired by French authorities to spy on von Oppenheim’s excavation while posing as an administrator.

In comparison to the definitive and majestic solidity of the artifacts, Rayyane Tabet’s mournful etchings seem to exude a more ambiguous quality that’s decidedly modern. Charcoal rubbings may seem like mere tracings, but Tabet doesn’t appear to be aiming to duplicate the reliefs’ designs; rather, he’s reinterpreting the creative output of a long gone civilization. The exhibition will be on view from October 30, 2019 through January 18, 2021. 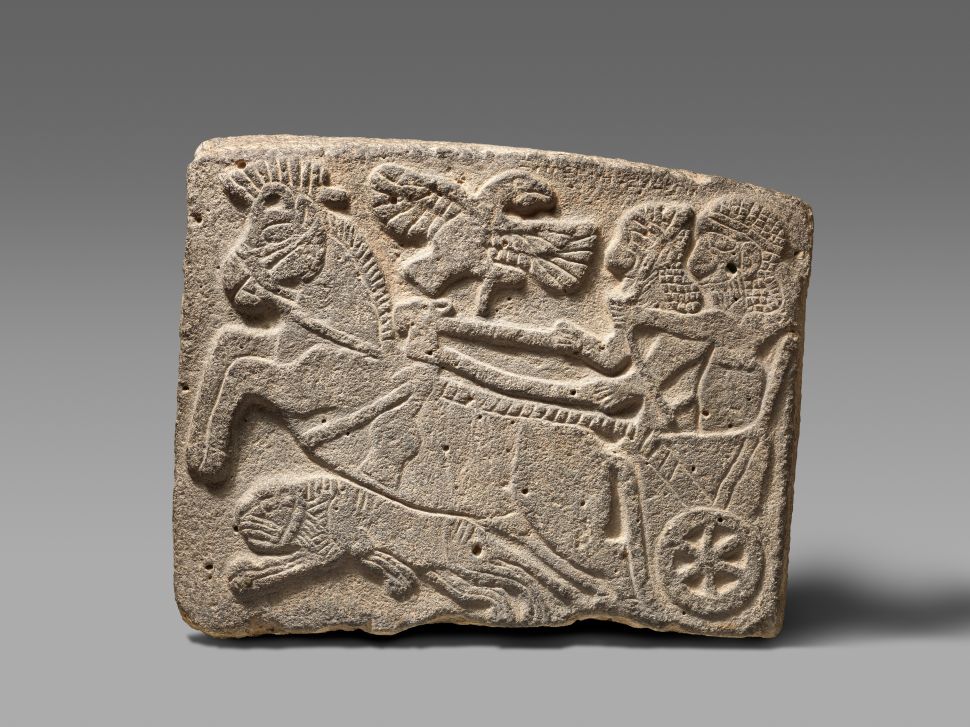