When a lead character in Apple TV+’s The Morning Show says “I need to control the narrative so I’m not written out of it,” it’s not some empty platitude. What she cannot realize, however, is how eerily prescient her words are for the surrounding show.

Alex Levy (a perfectly exasperated Jennifer Aniston) is the co-host of The Morning Show, a leading Today Show-esque morning news series at the forefront of media network UBA. But when her co-host of 15 years Mitch Kessler (Steve Carell), considered the “Dad of Morning TV,” is fired for alleged sexual misconduct, her professional and personal lives are threatened with detonation. Ensnared in this entropy is Bradley Jackson (Reese Witherspoon, all fire and brimstone), a hard-hitting journalist who reluctantly joins the show in the aftermath of its #MeToo scandal.

Showrunner Kerry Ehrin (Bates Motel, Friday Night Lights), along with Aniston and Witherspoon serving as executive producers, craft a parallel story of agency and narrative control for Alex and Bradley. Bradley is a mid-level reporter whose rigid idealism has kept her from the big leagues and Alex is finally firing back at the patriarchal institution that has dictated her career. With director Mimi Leder (On the Basis of Sex) swooping over the brightly lit but empty New York City of 3AM, we can infer that neither is wholly satisfied with their lives when we meet them.

As a star-studded show about the media, comparisons to Aaron Sorkin’s The Newsroom are inescapable and, in the midst of an impassioned plea for intelligence, ambition, ego or decency, The Morning Show can occasionally feel like Sorkin-lite. But Apple’s series isn’t as self-righteous as its HBO predecessor (though the walk-and-talks undeniably lack the same snap) and gains momentum over the course of its first three episodes. The more screen time Witherspoon and Aniston share, the more dynamic the show becomes. Their slow-burn relationship is poised to be a bedrock for the series as it moves forward, though in what light—supportive partners or heated rivals—I cannot yet say.

The Morning Show is most compelling when it focuses on the network politics and seductive power struggles—the soupy drama we all like to revel in. Assuming control of her professional destiny, Alex’s unsure make-it-up-as-she-goes warpath is exciting and also serves as a warranted comeuppance for those in her way. Billy Crudup shines as Cory Ellison, the smarmy, scheming network executive sowing discord to undermine her. Their ongoing perry and repost fencing bout is sharp. It’s hard not to be entertained when Crudup fully commits to the line, “Chaos—it’s the new cocaine!”

At first, Bradley feels like a familiar archetype—she’s a crusading journalist who isn’t afraid to get in your face—punctuated by eruptions of moralistic speechifying. But as time goes on, she becomes less of an exclamation point at the end of a statement and more of an ellipses you want to follow to the next line. But while Witherspoon may have the flashier role, it’s Aniston that brings it home. There’s a moment early on in the pilot when Alex—furious, heartbroken, and concerned about the future in the wake of scandal—smashes her phone in anger, takes a breath to reset, and continues pushing forward. Simple, but played just right by Aniston. It’s the moment that The Morning Show became real for me.

It’s too early to tell how the series is handling its #MeToo elements, which oddly feel disconnected from the A-plot. Carell’s character is met with both sympathy and scorn as he channels his one-note Beautiful Boy fury and despair here. Mitch maintains he had consensual affairs while shrugging off any responsibility or acknowledgment for his own wrongdoing—”I’m sorry you’re such an asshole” Alex tells him with both accusation and empathy behind it. Yet he also seems genuinely disgusted by the revelations a fellow accused public figure relays to him in private. Is The Morning Show attempting to differentiate varying levels of sexual misconduct? Is Mitch meant to be a redeemable creep or someone who is slowly realizing that he’s the predatory villain of the story? Until that becomes clear, it’s difficult to discern what kind of stance the series is taking.

The Morning Show has a lot on its teleprompter. Those in the web of the scandal attempt to leverage it for their own gain, idealism and agency do battle against cynicism and misappropriated values, and gender equality blankets over it all. That makes for some occasionally messy and discursive storytelling, but also a mostly entertaining and quick-witted exploration of what’s happening in public culture today.

“The news is awful, but humanity is addicted to it,” Cory tells Bradley as he preaches a bit of meta commentary about the future of media belonging to tech companies (Apple!). As the $300 million hopeful flagship series of Apple TV+, there’s immense pressure on The Morning Show to breakout in a big way. The fledgling service will need an anchor in the stormy seas of streaming; it will need to control its own narrative so it isn’t written out of the big picture of modern entertainment. Three episodes in, it might not quite be the next great drama of our time, but I’m willing to go the distance with it anyway. That’s saying something when I have more than 500 other TV shows just a click away. 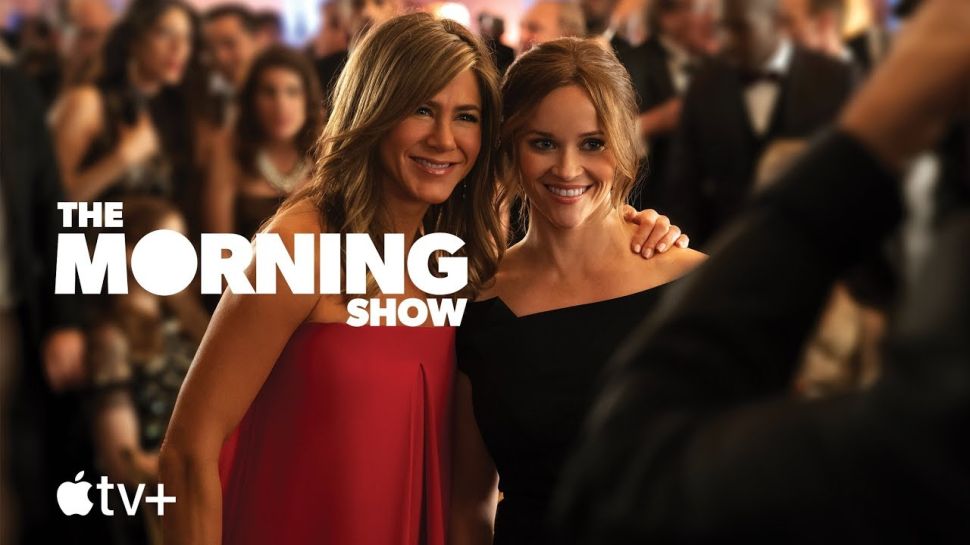