I never thought of Tennessee Williams, America’s famously tortured playwright, as funny. (Unless you spent private quality time with him, as I did; then his wicked sense of humor blazed brightly through the bourbon.) But onstage, you got the sadness, regret and other components of his brilliant dark side. Director Trip Cullman’s new Broadway revival of the great playwright’s 1951 play The Rose Tattoo, which won him his only Tony award, chooses to bring out the brighter side, in an overwrought production by the Roundabout Theatre Company at the American Airlines Theatre, and in the funny, feisty star turn by Marisa Tomei. She is so fine in a role conceived for the volcanic Italian superstar Anna Magnani (who won an Oscar for the 1955 movie version) that holding center stage amid a swirl of overproduced, over-the-top distractions, she deserves an award of her own.

This is the pulsating story of Serafina Delle Rose, a passionate Sicilian seamstress on the Gulf Coast near New Orleans, who lives in terminal mourning since her truck driver husband Rosario was killed on the Dixie Highway hauling a shipment of fruit. The robust widow’s total devotion, body and soul, to one man alone baffles everyone in town who knows her dead husband was unfaithful except Serafina herself. All she has left is the bleakness of grief, an obsession to keep her virginal teenage daughter Rosa innocent and protected from all men, and memories of the rose tattoo on Rosario’s chest.

Everything changes when Rosa falls in love with a wooden sailor and threatens to leave home, and, in the second act, Serafina is ignited with renewed sexual energy by the arrival of cheerful, stupid and virile Alvaro Mangiacavallo (wonderfully played by newcomer Emun Elliott, a Scottish-born alpha male hunk with an Italian accent authentic enough to match Tomei’s). Like the late Rosario, Alvaro is also a truck driver who hauls bananas. And he is so turned on by the repressed Serafina’s insatiable sexuality that he goes out and gets himself a rose tattoo.

Then The Rose Tattoo turns into a combination romantic comedy and lusty sex romp, with Tomei strutting barefoot, guzzling from an open champagne bottle in her underwear, treating Williams’ big seduction scene like a hilarious game of charades. She’s fully involved in every mood shift, and her co-star matches her, step by step.

It’s a miracle that anyone notices. The entire production is so elaborately (and unnecessarily) overblown it’s a struggle for Tomei and Elliott to hold attention. There’s so much going on that the distractions multiply. For starters, observe Mark Wendland’s busy set: Electrical wires reach to the ever-changing skies, against an endless line of pink flamingoes that stretch the entire width of the stage, beyond which a film of crashing waves bordered by palm trees shifts colors as the light of day fades into the purple shadows of the night.

With no lines or borders to separate the interior of Serafina’s house from the surf, sand and town outside, it is hard to keep track of where the actors are coming from or where they’re going, and forgivable, I guess, when they sometimes forget where the make-believe doors are. Awkwardly directed by Cullman, they enter and exit through empty spaces, plunging the audience into a state of confusion while the overcrowded cast roams freely about, replete with screaming, brawling children and singing, chanting women draped in black who look like escapees from the crowd scenes in Zorba the Greek. 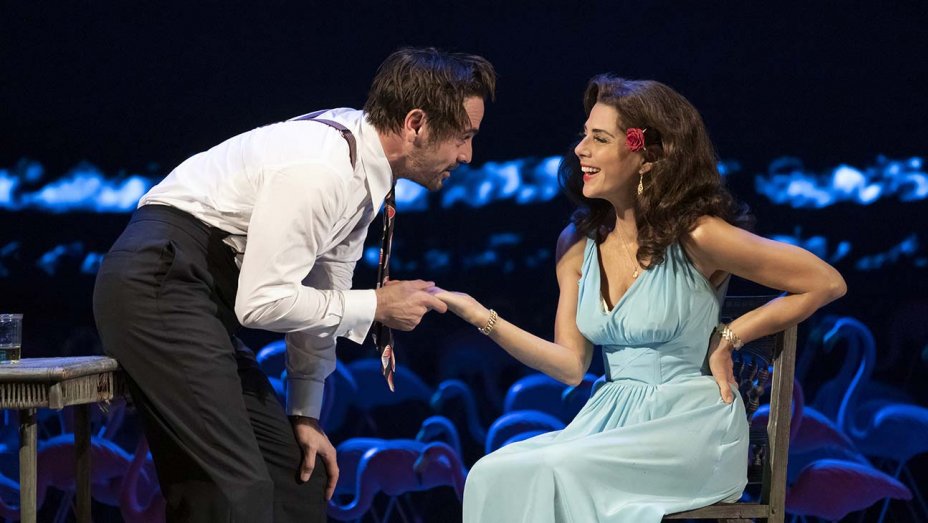