A sentence has been lodged in my brain since I first reviewed Adam Rapp nearly 20 years ago: “The Steinway was wedged into the corner like an enormous black gland.” Why that? There are scores of shocking, lurid images packed into Nocturne, his first major production (at New York Theatre Workshop), but that one stuck. Nocturne was a harrowing, poetic monologue delivered by the gloriously tortured and prickly Dallas Roberts. Its narrator is an impotent, depressive novelist and ex-pianist who, at age 17, accidentally decapitated his sister with his car. Years later, after his family has fallen apart, the writer returns to Illinois and his estranged father, who’s dying of testicular cancer. Rapp reaches for similar ingredients—disease, literature, sexual dysfunction, existential dread—to create The Sound Inside, a brutally beautiful fable about how writers live to write—and then forget to live.

Attending Rapp’s Broadway debut (crazy it took 19 years!), I found myself lapping up his gothic metaphors and cockeyed similes (a woman observes of a younger man: “Our age difference is like an enormous cast iron pot hanging from the ceiling.”) I had missed the crazy-eyed bravado of his authorial voice, the romantic enshrinement of the greats: Faulkner, Balzac, Salinger and other worthies namechecked with irony-free gusto. The Sound Inside is not your usual, dialogue-driven drama; it’s an elliptical memoir dominated by self-consciously literary narration—pleasurable for its elegant prosody, but also a self-condemnation, marking the distance its characters maintain from life. “That sounds like writing,” is the gentle corrective the play’s characters—a solitary Yale fiction professor and one of her first-year students—offer each other at different times in a scene. In one of the impeccable staging’s nicest touches, director David Cromer has the professor interrupt her narration to jot down good phrases on a legal pad. The entire performance emanates, as it were, from that pad and woman, on a vast stage engulfed by shadows (masterfully marshalled by lighting designer Heather Gilbert). Everything we hear and see is subject to the laws of fiction.

The Sound Inside feels, at least to me, like a homecoming for Rapp, who has written more than two dozen works of wildly divergent style and content over the intervening decades (not to mention novels and screenplays). It’s like while at Studio 54 I was simultaneously watching Nocturne with the same rapt intensity. I am so tempted to add “across the wound of years.” Please forgive me. That’s what really good writing can do: It infects you, replicates in you, makes its words yours. Sort of like the cancer cells that Bella (Parker) describes in her abdomen in the first fifteen or so minutes. In a longish opening monologue, Bella introduces herself with brisk efficiency. Never married, no kids, one well-received but obscure novel, dead parents, beloved books, and classes. Then one day: “I got up to go to the bathroom and was suddenly doubled over in pain. It felt as if I’d been stabbed in the stomach with a hunting knife.” Bella is diagnosed with Stage 2 metastatic stomach cancer. A small life is about to get much smaller.

The story backtracks some weeks or months and we meet Christopher (Will Hochman), one of Bella’s freshman writing students, and one of those preternaturally gifted and eloquent souls who are pure authorial invention, but you love them anyway. He barges into Bella’s office (without appointment) and proceeds to irritate her—then fascinate her—with his ambivalent love of Dostoyevsky and his evident hunger for literary fame. Christopher may be Gen Z, but he bitches like a Gen X curmudgeon, abjuring e-mail and Twitter and railing against baristas with “their Civil War beards and artisanal body odor and those stupid fucking doorknobs in their ears. They’re like these New Age, unshowered, tatted-out Hobbits.” Rapp is good at this sort of baroque invective. Of course, Christopher is working on a novel (with shades of Patricia Highsmith) and of course Bella, in the middle of an extended a creative dry spell, finds herself drawn to its development.

At this point, you might expect a sexual affair to blossom between teacher and student, but Rapp is blessedly ahead of us. Or you might think that Bella will steal the kid’s manuscript and pass it off as hers. Or, since Christopher’s work-in-progress is a story of friendship that veers into senseless murder, violence lurks in the wings. Without going too much further, I am delighted to report that Rapp keeps us on our toes with a slippery and suggestive form of storytelling that opts for mystery over the brute mechanics of plot. There’s a black-and-white photograph in Bella’s office, of a woman standing in a harvested cornfield. Christopher admires it. And in a later scene, he notes that the figure of the woman has gotten smaller. He keeps expecting snow to fall on the cornfield. The title of his work is To Lie Facedown in a Field of Snow. At some point he will be found lying down in snow on campus. Who, we must ask, is writing whom?

Unimpressed viewers could say that The Sound Inside is a gnomic short story pretending to be theater, but it’s too liquid and rhetorical, too performative, to deserve that designation. (I’ve used it with other plays before.) Our presence in the room is essential to puzzling out of the facts presented to us, and Cromer’s hushed, perfectly modulated staging unfolds with terrifying clarity, yet forces no conclusions on us. Hochman’s Christopher, ardent but still the blank page of youth, brings off his swaggering lines with grace and humor. I didn’t think I could revere Mary-Louise Parker more than I did, but arch, awkward Bella is one of her sharpest, funniest, most lived-in performances ever. Acerbic, detached, and monumentally sad, her Bella reminds any writer or lover of books why literature is the consolation of a lifetime, and sometimes a prison. The Sound Inside is a brilliant and unsettling portrait of a person who may escape death, but never the compulsion to transcribe that sentence that won’t quit your head. 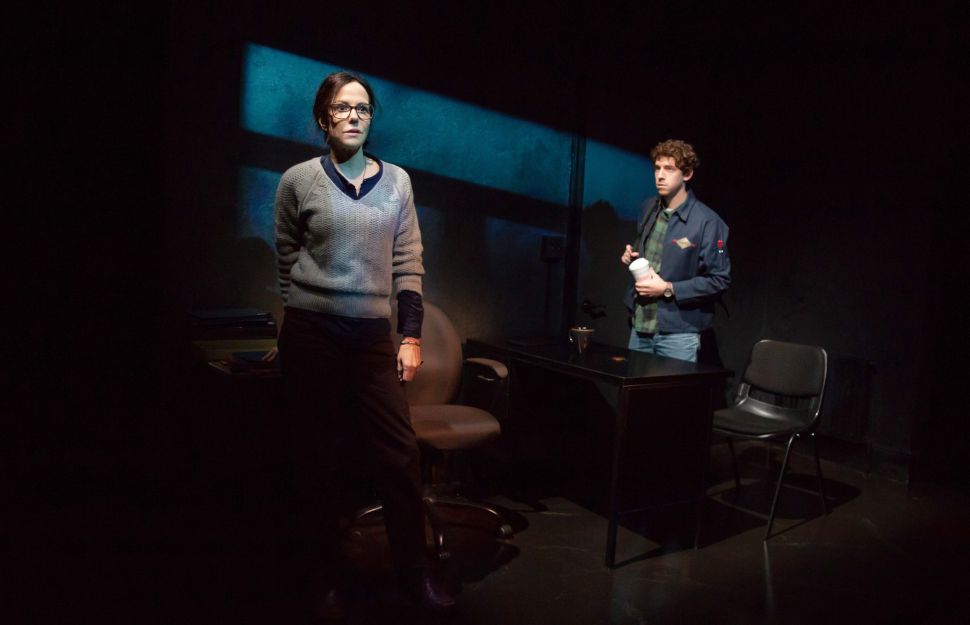