There’s as assumption—hoary but not totally extinct—that playwrights write themselves into plays. No doubt a piece of them lives in every character, but self-portraiture must be inevitable. Eugene O’Neill modeled the consumptive poet Edmund in Long Day’s Journey Into Night on himself. And Lorraine Hansberry freely admitted that Raisin in the Sun’s haughty college student Beneatha was her, years earlier. How much daylight is there between Tracy Letts and the cynical, divorced, 50-year-old Dick Wheeler?

Letts is 54 and has been married to actress Carrie Coons for six years. I’m sure it was no great stretch for the actor and writer to imagine himself adrift in middle age, grousing about MAGA hat-wearers, moronic superhero movies and the general crappiness of modern life. Also, for this Steppenwolf Theatre Company member whose work has long blurred the line between fine drama and pulp, Letts (Bug, August: Osage County) refuses his hero the “artist” badge. Wheeler, an ex-photographer at the Chicago Sun-Times, who had one mediocre gallery show, identifies as “craftsperson” at best. Still, even if Wheeler is merely an extension of his creator, he gets put through hell—which is the chief pleasure of this ambling, predictable study of male fragility.

Wheeler (Ian Barford) works at a sad-ass camera repair shop in San Diego and he tells his young co-worker, Anita (Caroline Neff), that all his romances have ended with the line, “And he was humiliated.” It’s a nice joke, but also a lie. What this blustery, defensive fellow needs is real humiliation: a personal catastrophe to leave him humbled before the world—especially before women. To that end, Letts puts the newly divorced Wheeler on a path that will draw two ladies into his orbit and bring him to his most pathetic, vulnerable level, the better to confront his issues.

And what are those, exactly? Wheeler drinks plenty, but he’s not an alcoholic. His lust is the typical lust of a single man, so it’s not sex addiction. Ah: It’s that old standby, toxic masculinity—the corrosive stew of self-pity, arrogance, and the tendency to treat women like ego-accessories. Luckily, Letts has poured plenty of wit and humanity into the lead. On the one hand, Wheeler’s somewhat evolved. When he clumsily asks Anita on a date, and she flat-out tells him she’s not interested, he thanks her for her honesty. When life coach Jules (Cora Vander Broek), with whom Wheeler’s friends try to set him up, likens him to a “turtle who doesn’t know he’s lost his shell,” the old curmudgeon is touched.

It’s not that Wheeler isn’t sensitive to truth and decency; he just has trouble seeing them in himself. As with many men (and women) of a certain age and education, he carries a double load of self-loathing and free-floating misanthropy.

But when Wheeler befriends Minnie (Chantal Thuy), a 26-year-old daughter of Vietnamese immigrants who is pregnant and penniless, he undergoes an illusory transformation. Minnie, Wheeler’s neighbor in a down-market apartment complex, must suddenly abandon her place due to an abusive boyfriend. She crashes on Wheeler’s couch, even as his affair with Jules deepens (the three of them share pizza and a Blu-ray of Kubrick’s Barry Lyndon).

But of course, our protagonist screws it up. An impulsive, ill-judged hookup with Minnie ignites both Wheeler’s fatherly instincts and a nostalgic yearning for youth. He brutally breaks things off with Jules, alienates his married friends (Jim True-Frost, Sally Murphy), and eventually drives away the freaked-out Minnie—who never intended to play family with this sad, old white guy. All Wheeler has left is the dead-end job fixing cameras and enduring the sleazy small talk of his odious, man-baby boss, Michael (Troy West), the sort of loser he’ll become in five years.

Despite brief lapses into sitcom-level dialogue, and an overall need to lose 20 minutes, Linda Vista is a well-crafted dramedy with laughs and pathos in the right places. All the same, your ultimate enjoyment is dependent on how much you can tolerate a white, middle-aged blowhard who stumbles into butt-naked sex with two beautiful women, both of whom he loses. Don’t get me wrong: the script’s packed with meaty lines and solidly built scenes that ramp up to our hero’s inevitable breakdown and limping shuffle toward redemption. The final image is Wheeler, in desperate need of a hip replacement, literally on his knees, camera in hand, trying to focus on something beyond himself.

Genre-wise, Linda Vista is a bit of a throwback, reminiscent of HBO’s early original comedies like Dream On or The Mind of the Married Man: male-centric, network-style sitcoms but with f-bombs and breasts. More recent iterations include Californication and Hung, series about older guys who feel left behind, angling for another round of relevancy—sexual or otherwise. It may not be the hippest or most PC-sanctioned territory, but Letts’ sharp dialogue and shipshape dramaturgy make for a smooth ride. Do I wish it had gotten weirder? Sure. Did my friend and I covertly whisper “bloodbath” to each other, hoping for a final spasm into cathartic, WTF violence? Guilty.

Director Dexter Bullard nevertheless steers the play to a brisk, sprightly production that lets a solid cast settle into neatly shaded characters. Barford is a strapping, earthy Everydude, and he finds a sweet spot between Criterion-hoarding snob and rusty roué, tossing off Letts’ rants and one-liners with salty charm. Broek’s Jules likewise is a balancing act between a neurotic mess and thirtyish woman of substance, and the writing for her is strong and dimensional. In fact, for a play that is unapologetically about a man, the women are sketched with dignity and empathy. Even so, the focus is tight, and we’ve seen it before: Midlife Crisis and Meltdown. In that way, Linda Vista is like a heaping plate of Super Nachos with a crisp IPA sweating on the side, Steely Dan on the jukebox, and a gaggle of pretty girls at the next table. It’s a little pathetic, a bit too familiar, and utterly pointless—but fuck it, it tastes good. 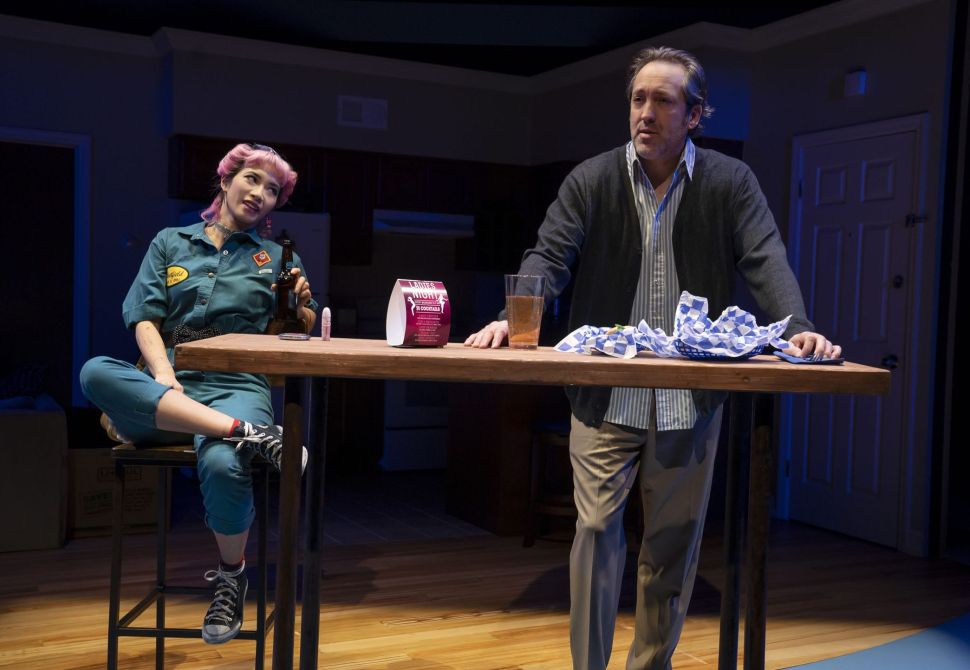