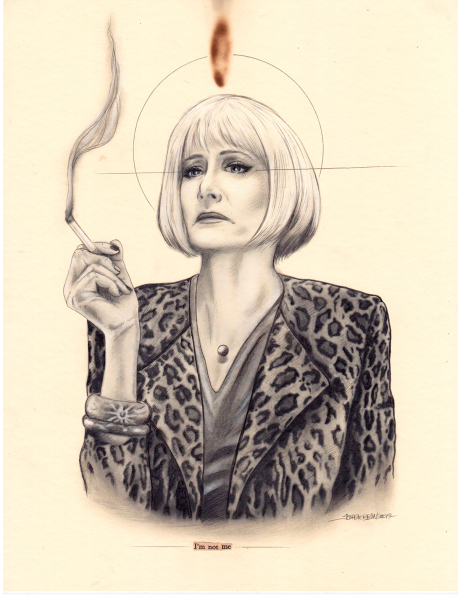 Fans of Twin Peaks rejoice! A little bit of Pacific Northwest Magical Realism is coming to the East Village. For one week only, The Living Gallery Outpost will be transformed into the infamous Black Lodge for the exhibition “No Stars.” The international group show will feature visual art paying tribute to David Lynch and a special one-night appearance by vocalist Rebekah Del Rio, who fans will recognize from her work on Mulholland Drive and Twin Peaks: The Return.

Presented by Stephen Romano Gallery, the exhibition is a fundraiser for The Phillip C. DeMars Foundation, a nonprofit founded by Del Rio in honor of her late son, who she tragically lost to cancer. The foundation brings vital art and music programs to children in hospitals and group homes—so this is definitely a guilt-free opportunity to indulge your inner Twin Peaks fanboy.

There have been precious few pop culture phenomena that have been as unabashedly weird and enduringly inspiring to artists as Twin Peaks has proven since debuting nearly three decades ago. “Twin Peaks was so exciting to me as a kid because it took a knife to the stulted middle-class suburban mainstream,” Brooklyn-based artist Jen Bandini explains. “Twin Peaks shines a light on corners of the universe of the mind that most people don’t even know exist.  David Lynch shifts the lens on reality, and I’m excited to take part in a show with other artists who see that.” 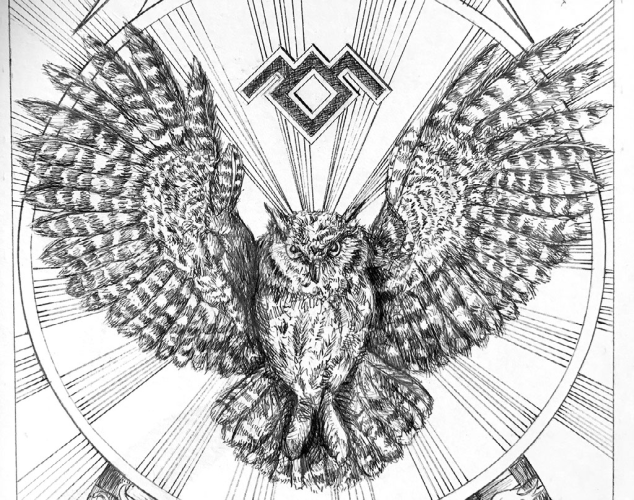 Indeed, it’s the series’ trippiness that seems most inspiring to the artists here. That’s somewhat surprising. After all, Lynch sort-of pioneered normcore—that is, the show had a knack for luring in unsuspecting mass audiences with non-threatening aesthetics. It’s a strategy we’ve seen replicated with varying degrees of success a lot in recent art history.

Here, though, we can expect the full-on Lynchian rejection of normalcy we came to know and love around the tail end of season two. Think creepy masked figures, otherworldly screams and allusions to the occult. 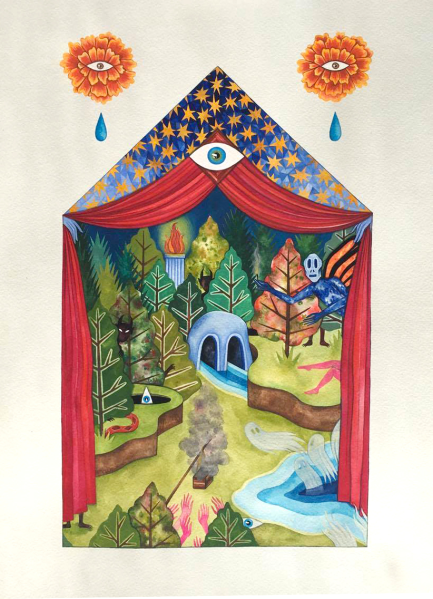 That’s not to say there’s any one aesthetic constant to the work in “No Stars,” which is impressive in the context of an homage to an auteur as iconic as Lynch. It’s fun to see how different artists can take similar cues and run with them in different directions. Portuguese artist Daniel Gonçalves, for example, is showing a tapestry-like abstract ink drawing that draws on the geometry of the Black Lodge. Those recognizable zig-zags show up again in the work of Brazilian painter Luciana Lupe Vasconcelos, here as the background for an almost folk-art-like interpretation of “Fire Walk With Me.”

Exhibition organizer Stephen Romano, for his part, is including pieces from his personal collection that wouldn’t have felt out-of-place on camera in Lynch’s world. These include vernacular art and vintage photography—notably landscapes capturing Mount Si, the real-life Washington State filming location for Twin Peaks. Romano got the idea for the show after he and Del Rio struck up a friendship at a festival in Tasmania, where Romano was curating an exhibition. They invited the artist Josh Stebbins, a huge Twin Peaks fan whose work Romano collects, to produce a new series of drawings for the exhibition. 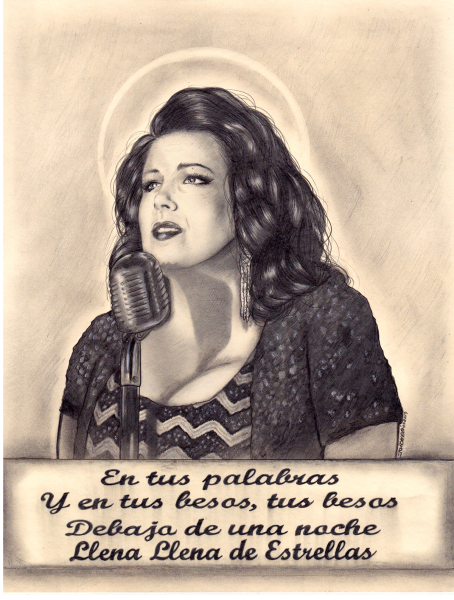 His delicate portraits are total show-stoppers that need to be seen IRL to be fully appreciated (the artist admits they posses “a certain vibration”). The image he created of Del Rio singing “No Stars” in Twin Peaks the Return feels especially poignant, and personally relevant to the visual artist’s struggles. Speaking of that scene, Stebbins recalls “It’s a strangely beautiful combination of hope and despair… I feel that same thing in my life, and in my art. I think I interpreted her [as] a saintly icon in that role because much like martyrs, hope (or transcendence) is perhaps achieved through despair or pain…the song that Rebekah sings moves me in that direction. There are so many emotions colliding it’s hard to really describe.”

If you want to be moved by Del Rio’s music en vivo, now’s your chance. The Memphis-based singer is coming to New York for a reception on October 10  from 5 to 10 p.m. She’ll be performing with cellist Dave Eggar, delivering what’s sure to be a can’t-miss show. 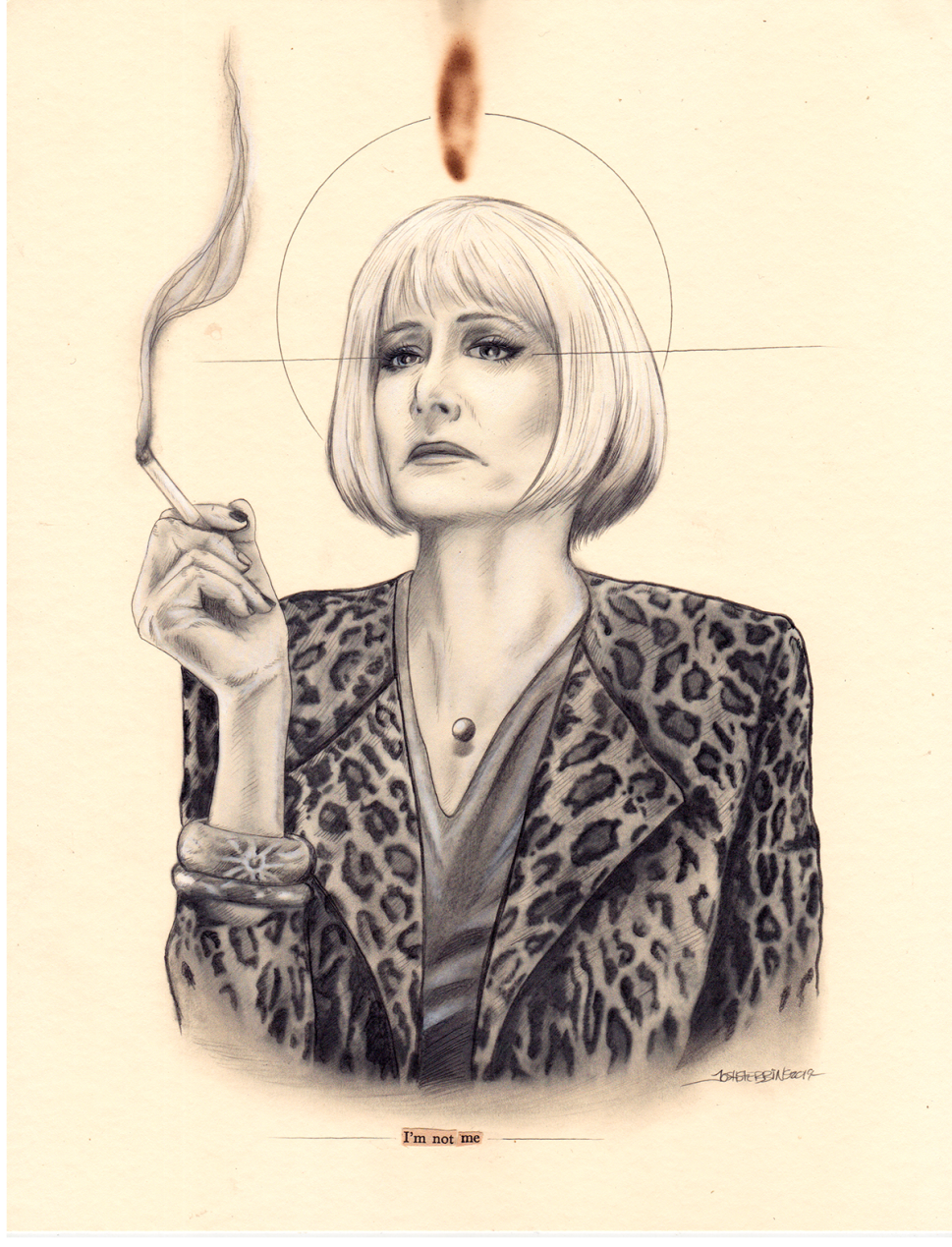