A Christmas Carol has been adapted so many times in the 176 years since it was published—from Mr. Magoo to the Muppets to Murray (Bill)—it’s easy to forget what a morbid little socialist fable it is. Charles Dickens’ ghost story begins with the ghoulish insistence on how dead Jacob Marley is (as a doornail) and proceeds to terrorize a thrifty financier with his own mortality until he gives back to the community. Elizabeth Warren would approve this message. Playwright Jack Thorne too feels the iron fist of social justice under the velvet mitten of plummy Dickensian prose. His version of the Victorian classic comes to Broadway after a successful run last year on London’s West End, doling out joy and dourness in equal measure.

It’s a tasteful holiday diversion, more artsy than your usual Elf: The Musical or Rockettes routine. Set and costume designer Rob Howell festoons the upper reaches of the Lyceum Theatre with dozens of soot-smudged lanterns and yards of ominous hanging chains, while below he arranges heaps of metal lockboxes, their mouths open as the grave. In contrast to these grim images of bondage and commerce, there’s a merry group of actor-musicians (fiddle, cello, clarinet, piccolo) tootling yule standards as we take our seats.

Thorne and resourceful director Matthew Warchus (Matilda the Musical) approach the familiar material as story-theater, with actors alternating choral narration with carols, and scenes flowing from one to the next without relying on set changes. Blocks of various sizes may be pulled out of holes in the floor to form Scrooge’s office. Four doorframes flip up from depressions in the floor to make Scrooge’s bedroom, turning the stage into a magical transforming toy.

As Scrooge, Campbell Scott steps into his father’s footsteps (George C. Scott played the role in a fine 1984 TV movie), and he’s an agreeable miserly misanthrope—if handsomer than your average Ebenezer. Thorne follows the usual path of the story, leaning harder on the concept of Scrooge as a survivor of childhood abuse and economic hardship. Scrooge’s impecunious drunk of a father beats him, and he’s likewise victimized by a sadistic schoolmaster. Belle (a memorable and vibrant Sarah Hunt) is more than feminine window dressing; she sizes up young Ebenezer and coaches him on getting a job at her father Fezziwig’s establishment (here a coffin-making making company, in case you forgot the death motif). Thorne did a similar darkening job as co-author on Harry Potter and the Cursed Child, taking a fantasy for kids and injecting father-son angst and grown-up insecurities.

This being a holiday show for all ages, there’s a broadly acted, crowd-pleasing vibe and frequent bits of audience interaction, especially after Scrooge’s conversion. Carolers warble from every corner of the balconies; long sheets are unfurled to the stage to sluice apples, oranges and other treats into baskets for the Christmas feast; and stage snow drifts onto the audience. The kids at the matinee I attended squealed at the low-tech but delightful stage effects.

For theatergoers in search of more traditional treats, there are amusing turns by stage veterans Andrea Martin and LaChanze, as the Ghosts of Christmas Past and Present, respectively. Martin plays it as a wide-eyed, ageless waif, and LaChanze adopts a heavy Jamaican accent and sunglasses. For some reason, both are pushing perambulators, like spectral nannies. At any rate, this Carol is truly an ensemble piece, with every actor doing heavy lifting at some point. Dashiell Eaves and Erica Dorfler make for a beleaguered but goodhearted Bob and Mrs. Cratchit, not hiding the emotional hardship that borderline poverty and caring for a severely disabled child can have on parents. And to play Tiny Tim, the producers have cast actors (in rotation) with disabilities. The day I went it was cute and cheeky Sebastian Ortiz, who gets around in a rollator, in which he does pull-ups, declaring, “I’m strong.” We’ve all seen non-disabled Tiny Tims lay the pathos on thick, but Ortiz just gets on with the business of eyeballing the giant, juicy turkey and taking no guff from Mr. Scrooge, no matter how reformed he may be this Christmas Day.

Thorne adds many lines and scenes not found in the novel, but his last original contribution is the most affecting: Ebenezer, alone on stage with Tiny Tim, having a brief conversation that ends in an embrace and Tim’s famous cheer, “God bless us, everyone.” The wealthy, damaged man-child and the impoverished special-needs child have more in common than you might expect. It’s manipulative as hell, but you can bet your sleigh and bells I wiped away a tear or twelve. This season, I’m sure there’ll be plenty of kids leaving A Christmas Carol who had a cool time, but wondering why their parents are sniffling so much. 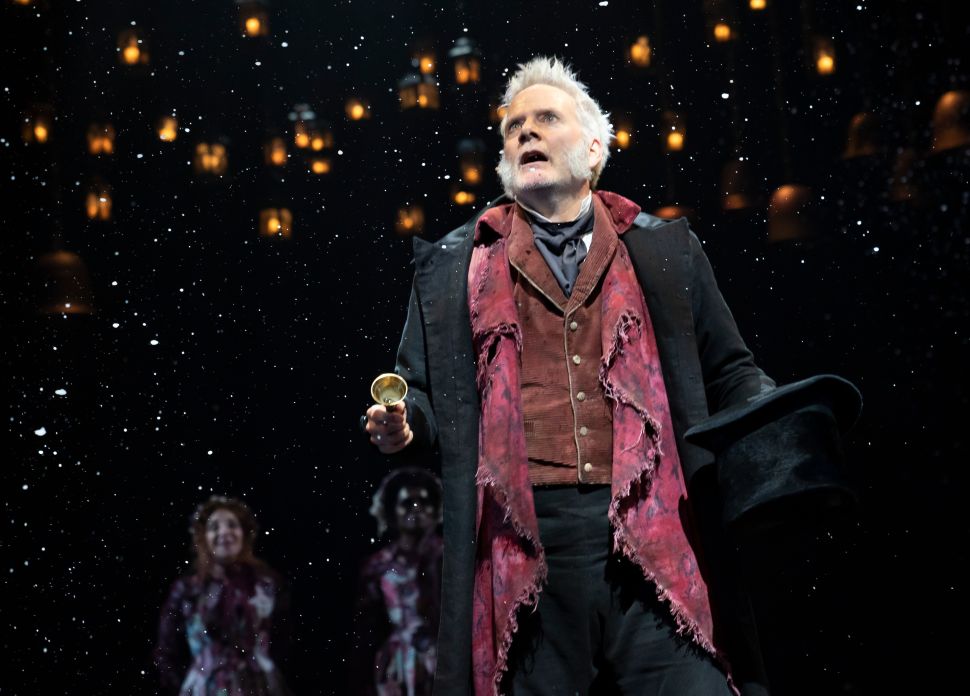