Memories are malleable, ebbing and flowing with the march of time and calcifying or softening alongside our developing sense of self. They trap us in a closed loop as we exhaustively try to out-run what came before or allow its inertia to propel us forward. Our memories define us even when we wish we could erase them all.

Honey Boy, opening November 8, is a memory. It shares that same hypnotic, dreamy quality blurred ever so slightly out of focus by a lifetime of recollection. Like most core memories that come to define a person, it’s dotted by pain and uplifted by joy.

Based on the true story of Shia LaBeouf, who wrote the script while in court-ordered rehab, Honey Boy externalizes the insidious cycle of trauma, employing memory to shade in the texture of a man many assume they know. Noah Jupe, 14, portrays a young actor living through a turbulent childhood with his troubled father (played by LaBeouf in a meta, Freudian twist) while Lucas Hedges picks up the role as a young adult. Israeli-American filmmaker Alma Har’el directs the two sides of the same coin with a striking empathy and potent two-track structure that transforms Honey Boy into an emotional, stirring release.

There’s a tenderness to Har’el’s approach, shaped by her own childhood spent with an alcoholic father and a career exploring performative identities through commercials, music videos and documentaries. The result is a refreshingly honest self-assessment and a cathartic tale rooted in fluid memory and realism. We sat down with the director to discuss the relationship between pain and art, cyclical masculinity, and the only way to find your movie.

Observer: Shia LaBeouf wrote the script, but you needed to take ownership of it as the director. Was that difficult given how intimately personal it was to him?
Har’el: I think that coming from a documentary background and doing two before this, that part was actually something I’m more familiar with. When you do a documentary, there are many moral questions about how to approach the idea of truth. I think it’s important to acknowledge as a society, as a filmmaker, as a friend even, that though the truth of course has to do with facts, it also has to do with the fact that our dreams and our subconscious are a part of our truth. Often what we see in film is just the manifestation of the events or the factual unfolding of somebody’s life. Shia and I connected to begin with, and our goal was to tell his story and to approach the reality of what happened to him. How he grew up and what were the causes of his now-diagnosed, very severe PTSD.

I think that as a filmmaker, if somebody is stepping into something like that, I wouldn’t be able to direct it well if they didn’t understand it in the way that I do. And one of the reasons I understand him so well is that I come from a background that is similar in some ways. My father is an alcoholic, I grew up in a social economical background that is a lot similar to his in many ways. Looking at this story, even though it had different circumstances—and obviously I was not a child star on the Disney Channel—I could relate to the heart of it and make it, in many ways, feel like it is not just my story, but the story of every child that suffered from childhood trauma or addiction in the family.

Honey Boy ends on a more positive note, but there isn’t necessarily a definitive redemption. It seems to say that just because something will be a life-long battle does not mean the fight is futile.
Yes, it was very important for me to not say “This is it. You do this thing, you make amends, you recognize the problem, and you’re done. Your catharsis is given to you and you’re now a healthy person.” I think that the effects of childhood trauma and abuse are a lifelong struggle and at every opportunity on the way, at every junction, you have to kind of re-calibrate your mental health and you have to acknowledge your capability to carry that pain and to pass it again to another person. So the film ends, I think in a way, that is extremely positive because the recognition of the issue and understanding that you will always carry it with you is actually the beginning of liberation. But the journey itself lasts a lifetime.

I described the movie on Twitter as being for “anyone who has ever felt like they needed to wear a mask in life, whether to hide from something or seek something out.” One reason for this is that there are so many layers to the performances, which follow characters attempting to present themselves as whole when in fact they’re quite wounded.
I think that what you said about the mask is so important because all my films deal a lot with this idea of the performance of self. Honey Boy deals a lot with the way men perform this idea of who they are and the fact that masculinity and gender is a performance in many ways, because of the expectations we have of masculinity and the legacy of generations of masculine men that have shaped our ideas of masculinity. [It’s also about] the relationships between fathers and sons, that includes those expectations and the disappointment that certain men carry about their own capability to perform that masculinity, so as a result, like you said, hide whatever it is that doesn’t meet the standards of those ideas.

It’s something that causes so much of the pain that young boys inherit, and then later on feel like they themselves have to perpetuate and repeat, otherwise they would have failed their fathers. So, we do live in a time when I think we’re settling, we have more discussion about the idea of gender performance and those roles. What makes this film able to explore this subject a way that is so layered and always works on a few levels with the viewer, whether you know about Shia or not, is the idea of making the film about an actor. This is a young child actor, and we see him often in the film having to perform not just on television, but in his own life. You really, as a director, get an opportunity to explore all of these things and the challenge was how to do it in a way that always leads with the emotional story as opposed to telling the story that has plot points and still feel like a progression.

The film toggles back and forth in time and they’re linked thematically, but it clearly shows the cause-and-effect development of this character. Was that difficult to pull off?
The hardest part of this film was the edit. I actually consider myself to be probably at my best in the editing room because of my documentary background. There’s nothing that trains you more to tell a story in an impossibly challenging way than making a documentary. Especially a documentary that is done in the way that I make documentaries, where you don’t really have an investigative lead and you’re not telling a story that is going from A to B and you’re not illustrating something that already exists. You’re actually coming up to somebody’s life and searching for something they don’t even know. So, when you’re in the business of discovery in filmmaking and you go into the editing room and you have 300 hours or 400 hours and you need to cut and hour and a half from that, it takes you sometimes a year. You find the film—and there’s only one film there. People think that there’s twenty, thirty films if you have 300 hours….just, no. There’s one film and for you and if you’re willing to do the work, if you’re willing to really search for it that hard, you’ll find it.

So it was very hard. I showed the producers a lot of the cuts and sometime they were OK with it already. They thought it was good and we would still go and flip the whole film again because I knew that the film was not there. When we found it though, and showed it to Shia, it felt like that was the only film that was there. He only saw the last cut.

The line that strikes me most from the film is, “The only thing my father ever gave me of any value was pain.” Do you think pain is necessary for great art?
That I don’t have an answer for yet. I myself wouldn’t have made art probably without my pain. What this film has given me and Shia is the wish to find a way to develop new tools and find new paint brushes in order to make art and be the artist that [we] want to be without relying only on pain. I think that filmmaking and art has saved my life; by giving myself a voice and giving myself permission to use it I have found my sense of self. I found a way to not only see myself through the eyes of people who couldn’t love the way I wanted them to love me.

But there’s another flip side to it. I do know that people that experienced pain are often empathetic in ways that is hard to experience when you come only from happiness or privilege or I don’t know, healthy joy. I hope to rely more on the empathy than on the pain as I move forward.

Shia plays his own abusive father, but there are also moments where you see his compassion and humor and love—

And you see his own pain and the abuse he suffered that brought him to be abusive. It’s generationally passed forward. Like they say in the rooms—hurt people hurt people.

Was there any hesitation in portraying him as somewhat sympathetic?
It’s scary to do it, because we live in a time where the space between accountability and cancel culture has become so nonexistent. There’s not a lot of space to explore the idea of healing and change in people that are capable of it. Shia’s father is alive and he’s been sober for 25 years. He lives in South America and when we made the film, Shia spoke to him for the first time in seven years and went there and met with him and read the script and now they have a very real relationship.

So I hope in my work to include humans that have done wrong too. And of course, this father has done wrong, but he has also given love, he has also had his share of pain, he’s also on a path where he tries to recover. And I think Shia himself is also controversial in the was that he handles certain altercations in his life and altercations that he has gotten to in the public and with police. So these are not easy characters to handle but I love people that are trying their best. 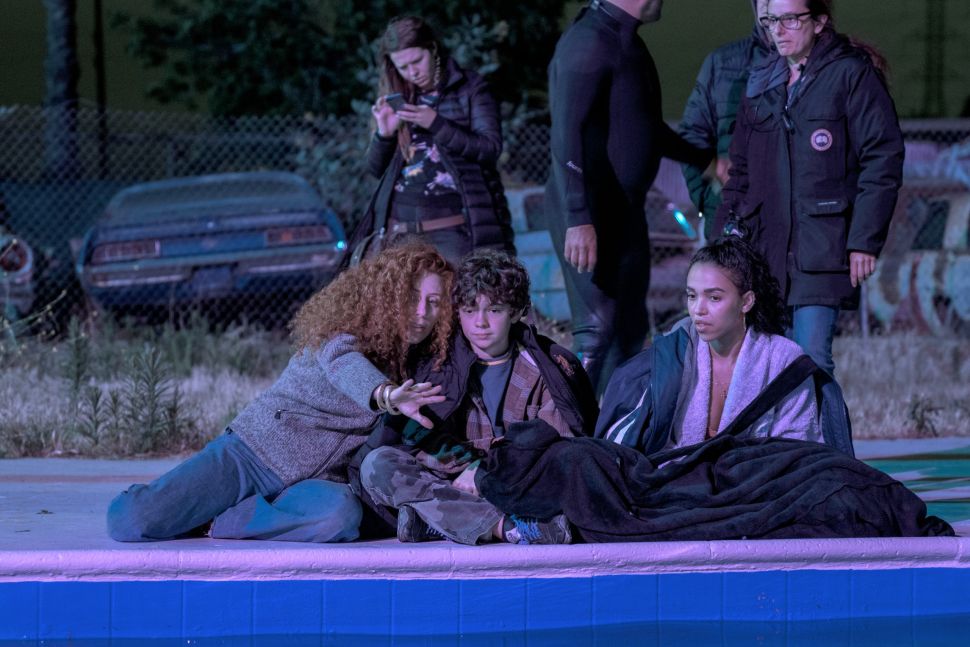