Angelica Ross says people often ask her why she doesn’t seem more ecstatic about her current success. “They’re like, ‘Aren’t you so excited?!’” she says. “Because sometimes I look like I’m not. It’s more that I’m kind of just pinching myself all the time, knowing that this is going to change. I can’t be attached to the euphoria of one situation, nor can I be beaten down by whatever may be perceived as a failure or a misstep. I always focus on what’s next, and being grateful for the steps I’ve taken to get here.”

In case you hadn’t noticed, while Mj Rodriguez, Indya Moore and Dominique Jackson were positioned as the female leads on FX’s game-changing series Pose, Ross stealthily emerged as an indelible scene-stealer in her role as Candy, an unstoppable, unpredictable, and antic-prone figure in the ballroom drama. In this year’s second season of the show, the episode that featured Candy’s death and funeral became one of the series’ most lauded and talked about, as it was emblematic of the murders of so many trans women of color. And by the time that episode aired in July, Ross had already been announced as a cast member of another Ryan Murphy project, American Horror Story: 1984, making her the first trans actor in history to land two series-regular roles.

SEE ALSO: The Darker, Angrier Tone of ‘Pose’ Season 2 Is Necessary Because of Real Events

“I always see these things not as coincidences,” Ross says, “but as little nods from the universe, and sometimes it all depends on how aware I am—how quickly I pick up little signs and symbols that can put me at ease after a long-term commitment for an unknown and uncertain time. You never know when things are going to happen, or when opportunities are going to open up.”

Ross comes across as someone firmly grounded in reality and constantly hoisted by spirituality (she practices Buddhism), and she’s combined those attributes to forge her awareness of transience—that “what’s next?” mentality. For Ross, opportunities opened up this year to unleash a torrent of nexts. There were the back-to-back TV series that unveiled an indisputably gifted actress. There was her appearance on Oprah’s OWN special, “Black Women OWN the Conversation,” where Ross sat beside folks like model Winnie Harlow and shared her coming-out story with her mother in the audience. There was her hosting of the September 20 LGBTQ Presidential Forum in Iowa, for which she partnered with GLAAD and became the first trans person to emcee such an event. And now there’s her growing presence on lists that count her among 2019’s most notable figures, including Vanity Fair‘s Future Innovators, Essence‘s “Woke 100,” The Root‘s “Root 100” and Out’s “Out100.”

Some of this newfound prolific presence—which crisscrosses art, performance, activism and politics—can be linked to “spirituality in an actionable form,” as Ross describes it. “I understand that you don’t just pray and wait, but you pray and take action,” she says. And her acute awareness of the intersectional limitations of being “a dark-skinned, black, trans woman” has empowered her, in both life and work, to be that much more action-oriented in claiming space for herself. She speaks of how dark-skinned girls like her need only exchange a glance, be it at a party or on a film set, to share an understanding of their mutual marginalization. And she says she’s steamrolled that marginalization by using opportunities to command attention.

“I’ve had to learn how to make the spotlight come to me, instead of just chasing the spotlight,” Ross says. “Case in point: being on a show like Pose. On that show, I was in an ensemble cast, and the way that the stories were written, I wasn’t really a main character—[Candy’s] storyline was not one of the main storylines. But with every single scene they gave to me, I took it politely and made it bigger. Ryan Murphy then started saying, ‘Oh, we’ve got to give her more, and write more for her.’ The action  I took there was to show up on time for work every day, have a good attitude, and deliver the most when they said ‘action,’ instead of being a bratty actress saying, ‘Why aren’t you writing more for me?’ In that state, you’re just complaining at the universe, and in Buddhism we say that complaining releases no good fortune.”

Ross’ determination and specific approach to success is also bolstered by a business acumen that she can trace back to her youth. She grew up in a Christian household in Racine, Wis., and while she was discovering her identity (“I knew I was not straight,” she says of herself in adolescence), she was also being dissuaded by her father from chasing her dream of studying music and theater. “I graduated high school a year early at 17, and the deal was that if I graduated early, I had to go to college right away,” Ross says. “My dad made me go to Wisconsin Parkside, a college one town over, and study business. He always told me that, as a black person, I would get nowhere if I didn’t, because I would not be in situations where I could call my own shots. I’m very grateful that my father gave me that sort of advice so I didn’t end up a starving artist. I’m still nervous, but I’m definitely not starving.”

And she’s definitely a bona fide businesswoman. When it comes to knowing and demanding her value, that began, as it has for countless trans women of color, with the oldest profession in the book. “I’ve gone through a very in-depth assessment of my value, and it started with me doing sex work on the street,” Ross says. “I set my price on the street, and I’ve grown, increasing that value to where I am today.” And what many people don’t know is that, in between, Ross became the founder and CEO of TransTech Social Enterprises, a program that, as described on Ross’ website, “helps people lift themselves out of poverty through technical training, digital work, creating a social impact, and bringing economic empowerment to marginalized communities.” Particularly designed to boost the welfare of trans folks, the company has been in operation since 2014, with Ross at the helm.

The savvy entrepreneur goes in deep when describing the challenges she faced when starting her business, which she says “came out of a true necessity for the community, because programs were popping up to serve trans folks [via] federal funding, but no [trans people were] actually involved in the programs or being hired to work the programs and serve the communities.” The community felt their real objectives and needs weren’t being met. “I launched TransTech in an effort to go right to the source.” She talks about how she didn’t spend time building a board; how she secured a fiscal sponsor, Allied Media Projects out of Detroit; how it took time “to get out of the red,” especially as “a black trans woman with no resources”; and how, despite applying for multiple grants with first-rate proposals, TransTech has only been approved for a few. Moreover, while TransTech gets more attention now that Ross is a breakout celebrity, she wants to see that attention translate into measurable support. “I get a lot of applause,” she says, “but I don’t get a lot of donations.”

Still, Ross can quickly point out the triumphs of her community-focused enterprise. “We have helped people with freelance jobs build their own personal businesses,” she says. “In our first year, we gave away 13 iMac computers, which changed 13 people’s lives. There was a black trans woman we helped who was chronically homeless and dealing with sex work and is now making six figures. A girl who volunteered with us from day one is now working in Washington, D.C., with a national trans organization.” And the list goes on.

All of this experience has instilled in Ross a business-minded approach to many things in her life, even to acting. It’s a trait that not all artists have, and the lack of it can lead to a rude awakening. “You have to sort of go into this knowing that when you want to be famous, or you want to be a star on a certain level—even if you’re a solo act—that it’s a collaboration. And that’s not just with the studio heads, networks, and producers who help make things possible, but with your audience—the folks who are going to buy and consume your art. When I perform live or speak in a room, I give thanks to the people who show up and for the energy they bring to the space. Because I’m aware and it has an effect on what I say. You’ve got to walk in with a mindset that you’re going to give and take.”

Ross’ advocacy for her own community is the glue that binds together the pieces of her journey thus far. While on Pose, she was notably vocal—both to her peers on the show and to its fanbase—that the hundreds of trans actors who were employed by series creators Ryan Murphy, Brad Falchuk, and Steven Canals would all rack up valuable SAG credits to amplify their careers, without, she says, having to play “dead prostitute number two on CSI or some legal procedural.” It’s the kind of insider fact that most viewers would likely overlook until its gravity is spelled out. And in regard to showing up for her community in an even more literal sense, Ross’s most noteworthy and affecting appearance this year was arguably at September 28’s National Transgender Visibility March in Washington, D.C., where she spoke to a crowd of thousands alongside fellow firebrands and activists like Ashlee Marie Preston.

“It was really important for me to be there so my community could see me up close,” Ross says. “I know that all these filters, and the lenses of being on TV, can sometimes create a distance or a certain perception. I’m still a person, and not only that, I am what we’ve been talking about wanting to see: a dark-skinned black trans woman on TV. And I want to let people know that I’m not only in this for myself. Every step of the way, I’ve always been trying to carry someone on my back—pulling, giving a hand up, to someone if not a few people, through my work and my organization. And I’m still here, willing to continue to create more opportunities that open doors.” What she’s hoping for, as she said in her speech at the march, “Is a time when we can finally drop our armor and focus on our dreams—the things we wanted to do before we had to battle for our dignity and freedom. I want to see a future where trans people are thriving, not fighting.” 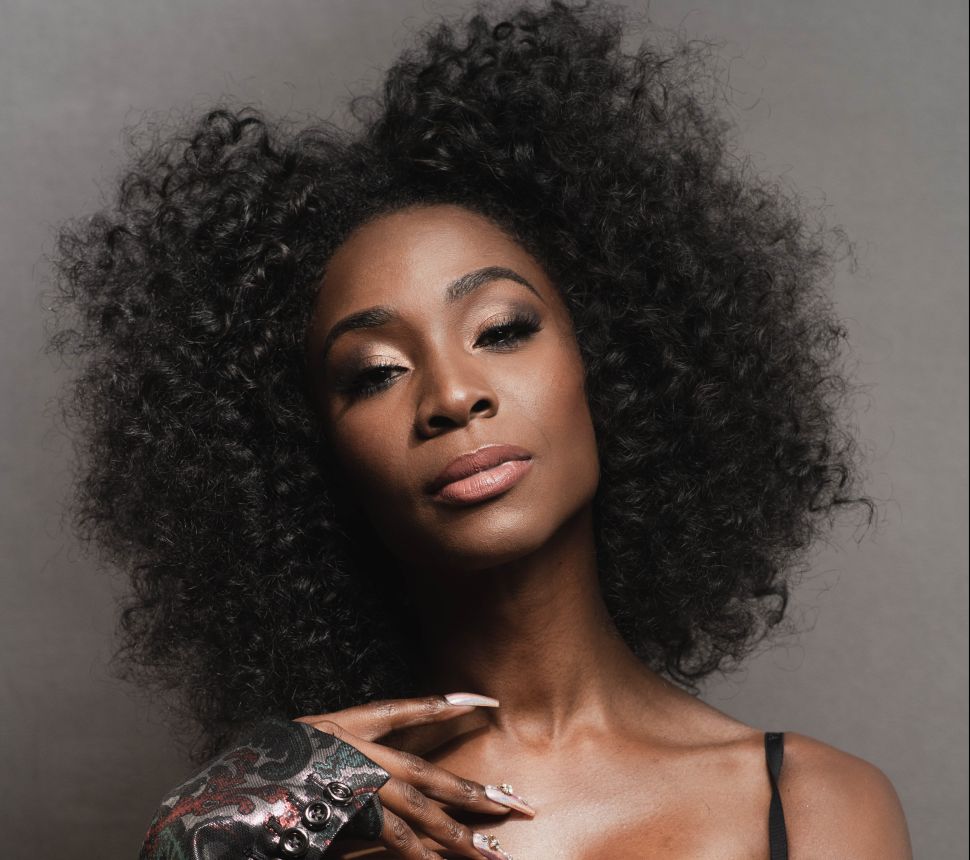