Device-assisted child care is an almost century-old concept. The world’s first electronic baby monitor, the Bakelite Zenith Radio Nurse, went on sale in the late 1930s—a response, at least in part, to the moral panic following the kidnapping and subsequent murder of the Lindbergh baby.

Thus, using artificial intelligence (AI) to assist or relieve parents entirely of the burdens of nurturing is not an abrupt or unanticipated innovation—many parents already monitor their children remotely using cameras connected to their smartphones, sometimes with unanticipated and extremely creepy results—and, given the cost and difficulty of securing reliable human babysitters, it may also be an easy sell.

SEE ALSO: What Happens When ‘Generation Voice’ Grows Up?

Enter Turkey-based startup Invidyo and its AI-powered “smart baby and babysitter camera.” For sale on Amazon for about $150, the device promises to monitor both the baby and the babysitter.

As The Daily Sabah reported, the device “promises to eliminate parents’ anxiety” by automatically recording whenever the baby cries or smiles—creating a two-minute “highlight reel” of happy baby faces for parents to coo over or post to Instagram—and will also sound an alarm whenever someone who is not an approved babysitter shows up at the house. In addition, the device will create a lowlight reel, turning on the camera whenever the baby cries and delivering a push alert to the parents’ smartphones.

As Invidyo co-founder Özgür Deniz Önür explained to The Daily Sabah, the AI-assisted babysitter-helper may help both parents and nannies by creating a digital record of how the day went. Based on the number of smiles versus number of cries, the AI-assisted “image processing technologies” will deliver a judgment on the quality of child care—and may also give parents an idea of when to get ready to come home or prepare to have their sleep interrupted by a chorus of banshee wails.

Using AI to turn on and off and deliver a notification—or not—also allows parents to take a break from constantly monitoring the baby monitor. According to Önür, the device enjoys a “success rate”—a metric he didn’t clearly define, but what sounds like accurately recording a cry or a smile—of around 90%. Other AI-powered baby monitors are already for sale in the U.S. and other markets, but these mostly film in the dark in order to analyze the baby’s sleep.

Relying on AI to gauge the quality of child care is a new development, and a move toward what you could call “surveillance parenting.” In other areas, developments like these have alarmed privacy advocates—an Outback Steakhouse location in Oregon recently canceled plans to use AI-assisted software to monitor its workers’ productivity after receiving backlash—and, depending on how dystopian your outlook is, this is just one more step in a creep toward Jetsons-style robotic child rearing, a trend that is already developing.

Sounds good? That may be a question of ideology as much as class—and, depending on how dystopian your outlook is, one more step in a creep toward Jetsons-style robotic child rearing, a trend that is already developing.

The AI-powered baby monitor is not marketed as a babysitter replacement, with good reason—any first-year law student would tell you such a move would be an open invitation for enormous liability—but rather a supplement for “white-collar parents” whose professional jobs already afford them the luxury of outsourcing the rearing of their children to someone else. Figuring out how good the babysitter or nanny is at the job can be difficult, and thus remote monitoring is a good way, in at least one analysis, of both relieving parents’ psychological anxiety while also protecting the babysitter from false claims of poor care and abuse. Look—it’s all on the record!

And according to ethicists monitoring the situation, AI-assisted child care (as opposed to AI-controlled) is the Goldilocks solution. As Amitai Etzioni wrote in Happiness is the Wrong Metric last year, “many… concerns raised by the use of AI caregivers… are avoided when AI caregivers operate as partners to human caregivers rather than substitutes.” The AI gives you a push alert, the AI analyzes patterns to predict future behavior. All the AI does is give you data, leaving the actual decisions of when to feed the baby, or when to fire the babysitter, to the humans involved. Whether the babysitter feels comfortable providing care in the panopticon is another matter, but as helicopter parents become surveillance parents, that might not be an option. 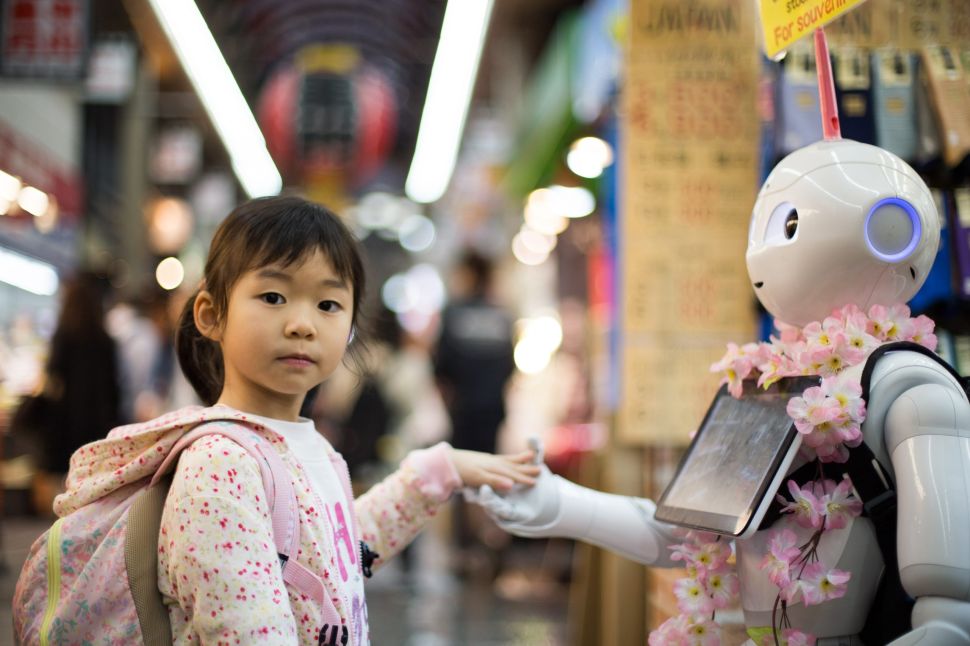