Long before Marina Abramović brought crowds to the Museum of Modern Art to pass between nude bodies or to stand before her as she sat in silence, she was breaking taboos in her native Yugoslavia.

She swaggered into the 1970s, the daughter of a war hero and party official, stripped to the waist, with a huge star ablaze onstage. If that didn’t mock political protocol, Abramović soon made waves for a cutting a five-point communist star into her stomach with a razor blade.

Those performances, often captured on scratchy black and white videotape, are among the exciting and revelatory moments of the new film Body of Truth by Evelyn Schels. It premieres tonight at Doc NYC.

Using the body as her medium, Abramović has company.

Shirin Neshat, who left Iran at the beginning of the Islamic Revolution, describes inscribing calligraphy on images of women’s skin. Sigalit Landau, the child of Holocaust survivors, uses barbed wire as a hula hoop. Katharina Sieverding, child of a Nazi father, reproduces the face of the leader of an anti-Hitler plot in a style that we might be described as caustic Warhol.

Schels spoke about her choice of the four women whose lives and work she interweaves in the documentary. “There are some men, like Robert Mapplethorpe—who has also going quite far with what he’s doing with his body—but there are more women, maybe because women are giving birth, maybe because women have to deal very month with their body,” she said by telephone from Munich.

“I wasn’t focusing on political artists. I focused on four female artists dealing with their bodies,” she said.

Yet much of what we see is inevitably political, like writing on the faces of Iranian women—the only visible skin of the women whom Neshat films.

“My art is so much about this notion of opposites—the masculinity, femininity, woman’s role, woman’s place, woman’s body in relationship to religious faith,” Neshat says on camera.

For Schels, another opposition was the body seen, and the body concealed. “Their sexuality, their eroticism can be seen in a part of the hand, and the rest of the body is completely covered; of course, the eyes are very important because the eyes are not covered,” said Schers, “for Shirin, the bodies of women became the battlefield for political ideologies.”

Battlefield is the apt term, as crowds swarm through Neshat’s videos. In Yugoslavia, where the army was sacred in the myth of liberation from the Nazis, Abramović performed in a military uniform.

In Israel today, Sigalit Landau gravitates toward the Dead Sea, immersing barbed wire in the salt so that the crystals that form on it look like lace. “I’m trying to figure out how to crystallize my story through this very physical sensual inspiring place,” she says.

With barbed wire throughout the landscape, “all the violence is hidden behind the crystals,” said Schers.

Body of Truth also scrutinizes Landau’s video Deadsee, 2005, in which a coil of floating watermelons—and Landau’s nude body—unspools gracefully in the same salty , seen from above by a drone. The watermelons are also wounded in Landau’s work, some of them cut open, exposing a blood-red interior.

Landau’s unwinding coil could be an homage to Robert Smithson’s earthwork “Spiral Jetty.” Evelyn Schels  looked back into their shared history when she saw Landau’s floating body in a lifeless pose.

“I’m German. It’s always a little bit under the skin,” she said.

Another German in Body of Truth is the photographer Katharina Sieverding, born in 1944 to a Nazi doctor working in Prague. A student of Josef Beuys, she explores self-portraiture and history.

“My relationship with the body is different,” Sieverding tells Schers in the film, “I don’t understand these artists who inflict injury on their own bodies.  In that respect, I feel incredibly intimidated and detached, because I equate bodily organization with what is happening in the actual body of society.”

Sieverding, 75, who now looks somewhat like a clone of Karl Lagerfeld with a pony tail, heavy glasses, high collar and boots, has been photographing herself for fifty years. Yet a single photograph in her work lingers with anyone who sees it—the composite portrait with her face and that of Claus von Stauffenberg, the Nazi officer who led a failed plot to kill Hitler in 1944. In a crimson negative, the image resembles a skull. Sieverding makes sure that it’s a hard image to forget, especially since she makes it easily reproducible, like that of a martyr or a Warhol icon.

Sieverding occupies the cerebral end of the spectrum in Body of Truth, where all roads lead back to Abramović, who among all outsiders in the film has been most successful in bringing her work to the mainstream, or in bringing the mainstream to her work.

“No knowledge is required to understand it—it’s about emotions,” says Schels of the work at hand.

Abramović, in the film, puts it differently—“The mind can lie, the mind can mostly lie, but the body never can lie.” 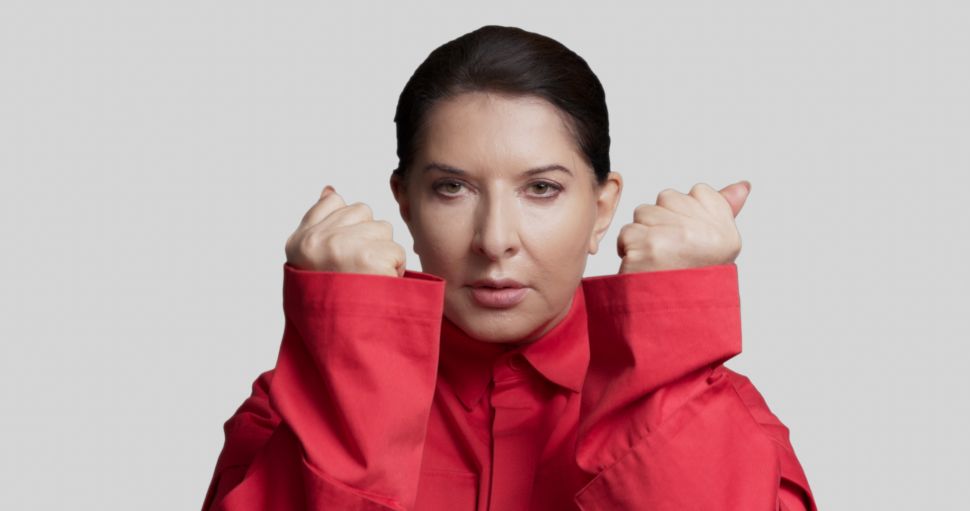