If one were to peruse the 2019 movie release schedule, one might notice an abundance of failures aimed at continuing notable franchises. From The Lego Movie 2 and Hellboy to Terminator: Dark Fate and Charlie’s Angels, there are more than a dozen sequels, reboots and revivals that underwhelmed, underachieved and outright bombed. Yet this is Hollywood, where intellectual property is remade and retrofitted on an endless loop. Looking ahead, Disney is planning a continuation of the Planet of the Apes franchise via Fox, and we’re getting $1 billion worth of Avatar sequels. After years of scuttlebutt, Warner Bros. finally gave The Matrix 4 an official greenlight. Even Netflix is moving forward with the long-rumored Beverly Hills Cop IV.

But what separates the successful sequels, remakes and revivals from the festering pile of flops?

“Your franchise continuation better feel fresh and original,” Paul Dergarabedian, senior media analyst for Comscore, told Observer. “The marketing should be focused on imparting the differences between the new film and what came before rather than simply playing up the similarities.”

Nostalgia is a powerful force capable of sweeping up entire generations in the warm, fuzzy feeling of memory (looking at you, 2019’s Lion King). But familiarity is a double-edged sword to American audiences. We are so inundated with content that a rehash of older material will struggle to cut through the clutter. Look how franchise entries of the last two years have struggled at the box office. 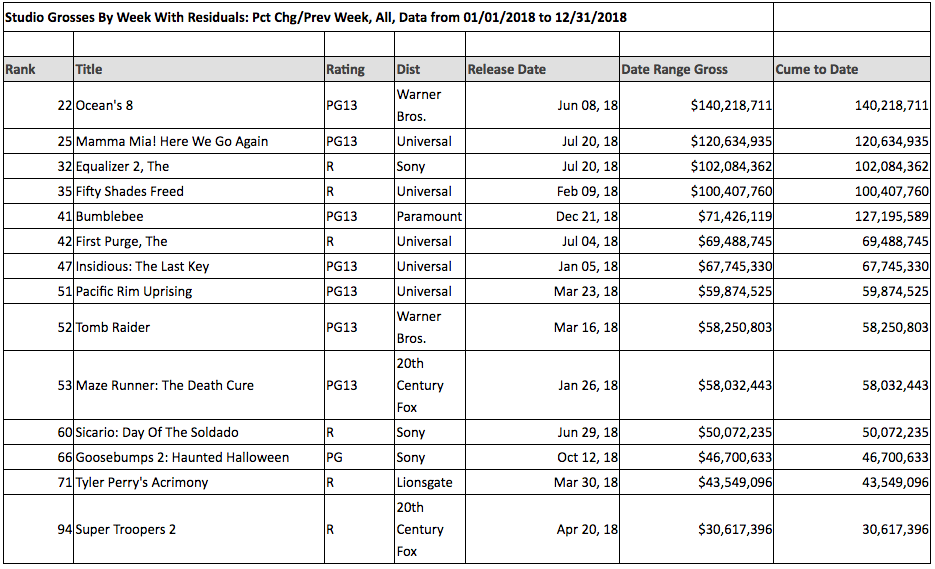 Selling ain’t easy, but there are common pitfalls to be avoided. Last weekend’s Charlie’s Angels was marketed on an IP and concept-basis—Sony assumed the brand was the main draw. What they should have done instead is rolled out a character-focused campaign that excited fans for the film’s new leads (Alita: Battle Angel underwhelmed domestically, but did a good job of this). Twenty years ago, the idea of a once popular TV show being turned into a movie was a rarity. Now, this new Charlie’s Angels movie only exists because it was a popular movie 20 years ago.

But savvy marketing isn’t a magic wand that can be waved over the fickle nature inherent to ticket buyers. Even when a new tentpole installment does manage to satisfy fans and critics, there’s no guarantee it’ll succeed where it counts.

“I used to say that quality always wins out and that audiences don’t have a bias against reboots, they have a bias against terrible movies,” Dergarabedian said. “But in the last few years, we’ve seen solid franchise continuations that didn’t make a whole lot of money. Not even great reviews guarantee an audience.”

Blade Runner 2049 was one of the best received films of 2017, earning widespread praise from critics and a healthy 87% on Rotten Tomatoes. It needed to gross at least $400 million worldwide to be considered a win by producer Alcon Entertainment; it ended its theatrical run with just $259 million. Similarly, Doctor Sleep—the decades in the making sequel to Stanley Kubrick’s The Shining—is drawing mostly positive reviews (77% on Rotten Tomatoes) and playing in the normally profitable horror genre. But the film opened to an abysmal $14 million and is looking like a write down for Warner Bros.

One of the few takeaways is simply that franchise installments live and die by an unidentifiable confluence of factors. It’s hard to gauge, which is why the lane’s batting average this year is so sub-optimal.

“Being good enough just isn’t good enough,” Dergarabedian said. “The presumption is that having known IP gives you a leg up in marketing and drawing audiences. But that isn’t true anymore.”

He points to Joker as a rare example of successfully building out a brand, which, on its surface, plucks a Batman character and fits an entire film around him. But, Dergarabedian argues, it’s a completely original feature with a towering performance that defies categorization. It’s different.

Hollywood will never give up on a prime piece of intellectual property as our franchise-heavy future underscores. But at the very least, they can learn from their own recent mistakes to put these sequels, reboots and continuations in a better position to succeed.