Well, this is really going to kill the magician card-trick trade. (“Is your card the three of clubs?”) Yes, computer-aided telepathy, via tiny, modem-like devices plugged into our brains, is positioning itself to be big business. And this could happen sooner than we know it.

Imagine a world in which you no longer have to type, tap or swipe your smartphone screen; your device will simply respond to your thoughts. Or better yet, there’s no smartphone involved at all—you simply subscribe to a brain-to-brain communication service.

This week, the Daily Beast outlined a few real-life telepathy frontiers that are currently being explored and brought to the world.

A team of scientists from the University of Washington and Carnegie Mellon University published a paper back in April, writing: “We present BrainNet which, to our knowledge, is the first multi-person non-invasive direct brain-to-brain interface for collaborative problem solving.”

Their experiment involved three research subjects, wearing rigged up sensor caps, who played a rough version of the video game Tetris. Two of the players could see the screen of falling blocks, while the third was beamed commands on how the blocks should be rotated to fit into the puzzle. The experiment showed how people could play a video game together using only… their minds. Whoa!

As stated in their press release, “We wanted to know if a group of people could collaborate using only their brains. That’s how we came up with the idea of BrainNet: where two people help a third person solve a task.”

Sure, that looks great for the future of gamers, but what else can we do with our soon-to-be telepathic powers?

Back in September, Synchron, a California/Australia-based medical device company, trumpeted the success of a new brain sensor implant. As stated, it’s a sensor that doesn’t require drilling a hole into one’s skull. (My favorite type of brain sensor.) Instead, it involves a tiny, flexible “stentrode” which travels through the bloodstream to the brain. From there, it reads neural activity and wirelessly transmits the data to other devices or (and this could sound crazy) modems in other people’s minds. Synchron’s implantable brain device is largely being developed to interpret signals from the brain for patients with paralysis.

Again, lets hope that down the road no one corrupts this technology and uses it for the benefit of evil or crazed militaristic purposes.

Thus, it’s no wonder that mega-companies, such as Facebook, want to jump on the brain telepathy bandwagon. In 2017, Mark Zuckerberg’s company announced its brain-computer interface program, noting the goal was to “build a non-invasive, wearable device that lets people type by simply imagining themselves talking.”

Excellent. Now Facebook will be able to exploit our data simply through the words coming out of our mouths. No typing needed.

So I guess you’re wondering at this point: “What about all the ethical questions that go along with brain telepathy technology?”

Could some future embodiment of a brain-to-brain network enable a sender to have a coercive effect on a receiver, altering the latter’s sense of agency? Could a brain recording from a sender contain information that might someday be extracted and infringe on that person’s privacy? Could these efforts, at some point, compromise an individual’s sense of personhood?

That’s right—you think pop-up ads, based on your search history, are intrusive on Facebook? Just imagine how you’ll feel when intrusive ads start popping up in your brain. 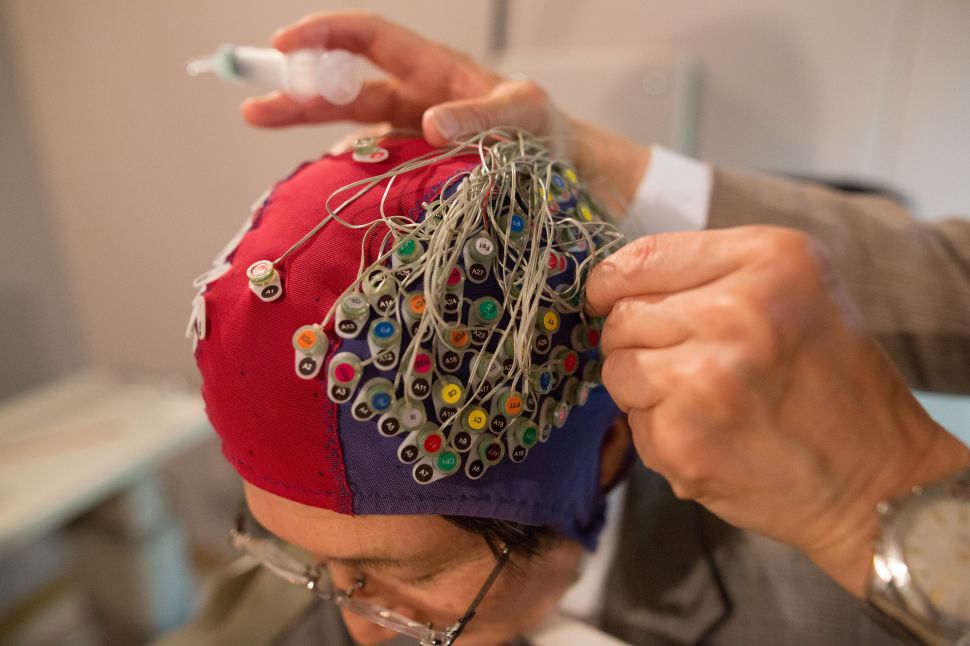