Say you’re watching a video—highlights of the big game or a trailer for that new Netflix show—and you really want an outfit you see. Good luck finding that on the internet, though… right? Alexa, Siri and “Hey Google” probably can’t respond with the right answer to “What’s the brand of that cool sweater the bassist from Weezer is wearing?”

But the world of video and online shopping could be turned upside-down, thanks to Clicktivated, a patented interactive video technology that lets you seamlessly interact with and buy what you see in videos. It’s finally connecting content and commerce using the cleanest UX in the market today.

Remember the movie A Christmas Story, set in the 1950s, in which Ralphie spends the bulk of the movie on a lengthy quest for his dream present, a Red Ryder BB gun? But modern shoppers would rather “shoot their eye out” than struggle for more than a month to get what they really want to purchase.

We see items we want all the time in videos but often lack the means to shop for what we see.

“The current process is like going to a department store, seeing what you want, and then have all of the lights cut out and hunt around in the dark for the product, cash register, etc.,” sighed Clicktivated founder and CEO Chris Roebuck.

But Clicktivated is changing the way a consumer can engage with products in a video. “By nature, video is passive, it’s something you just ‘watch’ but can’t do anything more than that. You certainly can’t engage with items on the spot,” Roebuck explained. “Now, video can be an active experience for the consumer. You won’t have to go through the painful process of searching everywhere on the internet for it.”

So, I tried it out for myself. I watched a couple of videos until a saw a Clicktivated video of a woman shopping at a Sam’s Club supermarket. She selected an iced Starbucks Frappuccino bottle; I selected her bottle, and a logo for the item popped up on the right side of my screen with an offer to “Shop Now.” Clicking on the “Shop Now” button transported me to a 15 pack of Mocha heaven, for only $17.98 and a chance to pick it up tomorrow at a Sam’s Club down the road.

But it’s about more than just consumer convenience. Brands themselves can measure video in a new way with Clicktivated, figuring out what works, what doesn’t and allowing them to determine what customers actually want. “It allows companies to track varying digital marketing strategies and figure out how to create flexibility across channels,” Roebuck told Observer.

“It’s not content-specific,” Roebuck added. “You could have it in a music video and a sports video. It’s based on what the clients who want to use it wants. We want it available for every screen and every device. Digital-play… mobile, tablet… anything where you can stream a video. That’s the ideal demographic right now, on a phone or laptop. It’s not available for home display yet, but we’re working on it.”

When the Idea Light Bulb Clicked on

Where did someone get the idea for this technology?

“I was watching more and more video online” Roebuck explained. “I was watching and finding myself interested in buying things all the time, going through the process of trying to buy something on my own. Because of its passivity, I found that video wasn’t very good for consumption. I wanted to jump on the new idea first and solve it.”

Roebuck, who got his degree in marketing and advertising, says that he looks “at everything from that perspective in my personal and professional life.”

“I saw video as big but didn’t want it to be passive,” he continued. “Solving the challenge of making it active became a personal challenge. No one wants to aimlessly search for something they want to buy. They want the convenience of easily buying it.”

So what’s Roebuck’s advice for starting a company, like his, which made this idea into a reality?

“Try to surround yourself with good people,” Roebuck advised. “You’ll meet with lots of characters. Don’t be afraid to ask for help and guidance. Do as much networking and reaching out to people as you can. You can get good help or good advice. Help them too. Entrepreneurs are OK with doing that. Such people are not self-made. There’s lots of stress and hard work, but you’ll get through it.”

This is different from what we’ve been told about the solo impresario, inventing the perfect product. “[A] crazy genius isn’t running the company,” Roebuck argued. “It takes a team to turn an idea into a product or service. So much goes into being an entrepreneur, the right mindset. You have to know what to do, and what not to do. Don’t try to do it all on your own. Nothing is easy. Coming up with an idea is not easy. Stay away from that ‘strike it rich’ mentality. While you daydream, someone else is executing.”

That someone else might be clicking on yet another product, or coming up with a new way to activate Roebuck’s Clicktivate. I can see myself watching an NFL Playoff game in the future, where a highlight reel features Green Bay Packers quarterback Aaron Rodgers throwing a touchdown pass. I could click on his jersey and immediately figure out how to buy it.

“Celebrities and influencers have a tremendous role in consumption,” Roebuck agreed. “It’s amazing the power they have in motivating consumers. We live in a world where everyone wants to be someone deep down. Celebrities can really drive brand and products, almost overnight.” 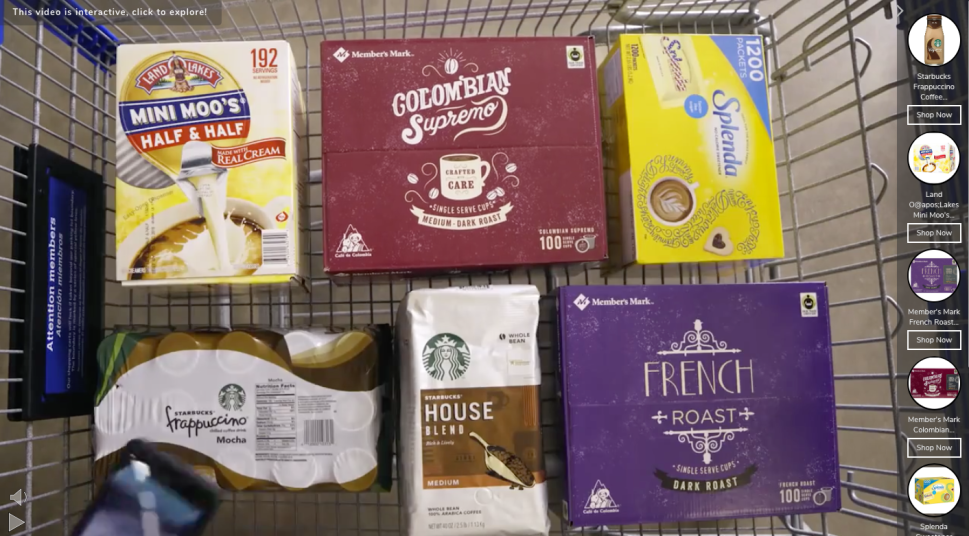