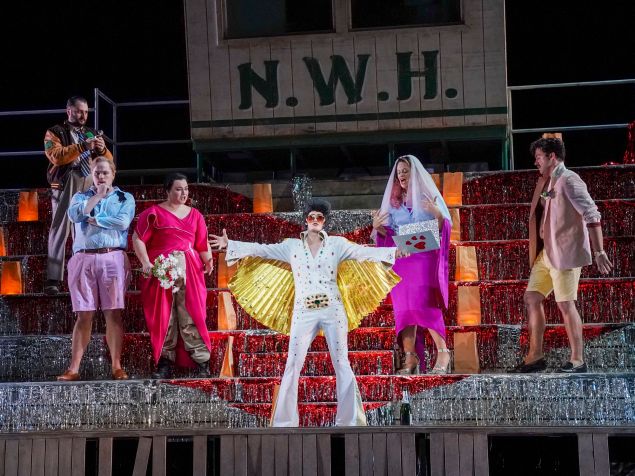 The cast of Così Fan Tutte at Juilliard prepares for a marriage officiated by an Elvis impersonator, as one does. © 2019 Richard Termine

The venerable Juilliard School at Lincoln Center has built a formidable reputation for developing some of America’s most superb young musicians—including, in my experience, some terrific young opera singers such as Jakub Józef Orliński, Ying Fang and Isabel Leonard. A vital part of the school’s training is the production of professional-level stagings of opera in order to prepare the fledgling artists for the demands of a singing career.

Last week’s bungled presentation of Mozart’s sublime Così Fan Tutte, then, can charitably be construed as “preparation” for a young singer’s worst-case scenario: what do you do when confronted with a double whammy of a clueless director and a pedantic conductor? (The answer to that question, which apparently the singers correctly worked out for themselves, is “sing the best you can and disregard the catastrophe happening all around you.”)

SEE ALSO: Philip Glass’ ‘Akhnaten’ Is a Somber Triumph for the Met

Così is a notoriously difficult piece to pull off dramatically: it sets up a rom-com/farce plot (two guys make a bet to test their girlfriends’ fidelity), which abruptly changes tone in the second act as all four young lovers seem to take their new mismatched romances seriously. Then, encouraged by a perhaps sinister authority figure, everyone decides that the preceding three hours of psychodrama should be regarded as a learning exercise, the theme of which is, “Even in love, make reason your guide.”

At Juilliard, director David Paul set this problematic action in a contemporary high school, which in itself is not at all a bad idea. (The subtitle for the opera, after all, is The School for Lovers.) But because of the specificity of detail with which Paul loaded down the stylized comedy, the onlooker was constantly trying to reconcile what was presented on stage with real life.

For instance, Paul established, with a distracting pantomime segment during the overture, that the four youngsters have just graduated. Fine. Then why do they hang around the otherwise abandoned school building all night long? Why, especially, do they choose to loiter in the school’s unisex restroom? What motivation do two faculty members—a teacher and (I guess) a football coach—have for pranking these kids into having sex with each others’ partners?

And—though this is a minor point—if this ruse is as impromptu as the libretto indicates, why would an English teacher have handy a complete Elvis costume for use as a mock wedding officiant?

While we’re on the subject, I am willing to believe that Generation Z kids would know, however vaguely, who Elvis was. But would they understand the campy gag of being married by an Elvis impersonator? Isn’t that more of a Gen X sort of joke?

In practice, all these contradictions essentially nullified the “universe” the director was trying to create, and we were left with—as so often happens in productions of this opera—a first act vulgarized with low comedy followed by a second act of random (and, in this case, needlessly cruel) melodrama. The paean to reason at the end of the show played as neither heartfelt nor ironic; rather it was (figuratively) just a lot of meaningless yelling.

In a literal sense, though, nobody yelled: the young artists in fact performed very much within the bounds of good taste. That’s also the bad news, though: the singing was all technically sound and immaculately coached, but for most of the three-plus hours of the performance, nobody on stage sounded passionate or even individual.

A case in point is soprano Kathleen O’Mara as Fiordiligi, an attractive lyric voice with easy flexibility and a plausible chest register for the role’s sudden plunges to the area around low C. She sang every note and never made an ugly sound—even when Paul sent her out for her big second act aria in a tomato-colored bridesmaid’s dress, camo pants and Doc Martens. But she exhibited no trace of bravura, no temperament that would justify the music’s extravagant vocal gestures.

Similarly, Megan Moore as Dorabella poured out rich, buttery mezzo tone, a genuinely beautiful voice. But nothing in her demeanor suggested the sort of personality who would react to a temporary separation from her boyfriend with the aria “Smanie implacabili,” a protest frenzied enough to suit Orpheus storming the gates of Hell.

Of their male counterparts, Erik van Heyningen as Guglielmo at the very least sang out, filling the 900-seat Peter Jay Sharp theater with vivid baritone sound. Next to him, James Ley’s fluttery high tenor in Ferrando’s music sounded at best unobtrusive.

With the class distinctions between aristocrat Don Alfonso and servant Despina upended, bass William Socolof and soprano Mer Wohlgemut seemed to fade into the background. He, at least, showed some flair in declaiming recitative with meaning, a skill the rest of the cast, it seems, has yet to develop.

Whatever the singers’ good intentions, though, they all were sabotaged by the clunky conducting of Nimrod David Pfeffer. He encouraged a bass-heavy, plodding performance from the orchestra. So many of the numbers in this opera (for instance, Fiordiligi’s long second act lament) depict tender, delicate emotions, but Pfeffer’s baton was unresponsive to the flow of the music.

The literal translation of the title of this opera is “That’s how they do it.” This time around, that phrase sounded like an unheeded warning. 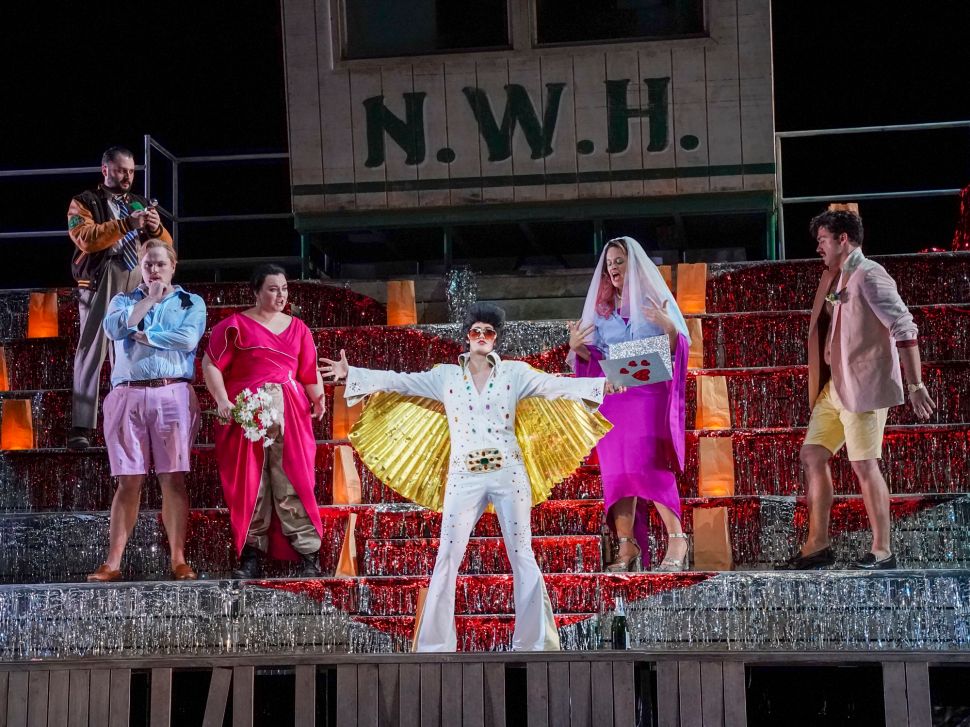