I never cease to wonder how some films manage to borrow, imitate, copy or steal from older films without acknowledging or crediting the originals. A predictable, ho-hum police procedural called Crown Vic, about one night of violence and death with a veteran Los Angeles cop assigned to escort a rookie cop through the criminal underground while teaching him the ropes, is so close to the 2001 Training Day that it’s practically a remake.

SEE ALSO: Nothing About Ghost Story ‘Light From Light’ Makes Any Sense, Including the Title

In a carbon of the role that won Denzel Washington an Oscar, the tough, watchable and ingratiating Thomas Jane keeps everything from getting bogged down in deja vu while newcomer Luke Kleintank essays the naive rookie role that launched Ethan Hawke with wide-eyed empathy. The rest of Crown Vic, written and directed by Joel Souza, will keep you glued to your watch more than the screen while you remember how much better Training Day was.

This trek through Hollywood after dark begins promisingly enough, then loses credibility to melodrama in one contrived situation after another. By the first light of dawn over the freeways, “the ropes” is not all Ray (Jane), the hardened cop with 25 years of experience on the mean streets of L.A., teaches the idealistic Nick (Kleintank), a straight-shooting, clean-cut patrolman with a wife and a baby on the way who is proud to embark on the same career as his respected father. But his belief in following the rule book to serve the public constructively is quickly crushed when Ray shows him the “public” is nothing more than swine.

Dispensing advice between hostility and insults, Ray’s “training” begins with moral ambiguity and spirals downward into cold-blooded corruption. With nothing between them and the modern version of the wild, wild west but a windshield, Nick gets a first-row seat to unimaginable horrors that include a corpse in a burning car, a rogue cop hell-bent on beating a man to death in a pool of blood, a drunken valley-girl who bribes them with sex and then throws up all over the squad car requiring an emergency trip to a car wash, junkies in all-night diners, and a drug dealer Nick forces to strip naked and then abandons in handcuffs on the sidewalk.

It’s a war zone, like Afghanistan, and the prey they encounter in the alleys is no worse than their fellow cops on the beat. The point is that being a cop in L.A. is a job that is no better than scrubbing floors in a hospital.

The young cop who believes in justice and equality for everyone on both sides of the law learns, as his senior officer goes farther off course by the hour, that to follow the law and stay alive you have to break the law and become a killer yourself. By the time the first light of dawn breaks over the city, Nick is buried in disillusionment so deep he wonders why he ever joined the force in the first place.

You can’t fault the actors, who play the sadism for tough, two-fisted realism, but Crown Vic (a title that makes no sense; there’s nobody named Vic in it) is still a cheap copy of Training Day and a crash course in lock-jawed cynicism 101. Not to mention the worst P.R. the city of Los Angeles has had since the Rodney King scandal. 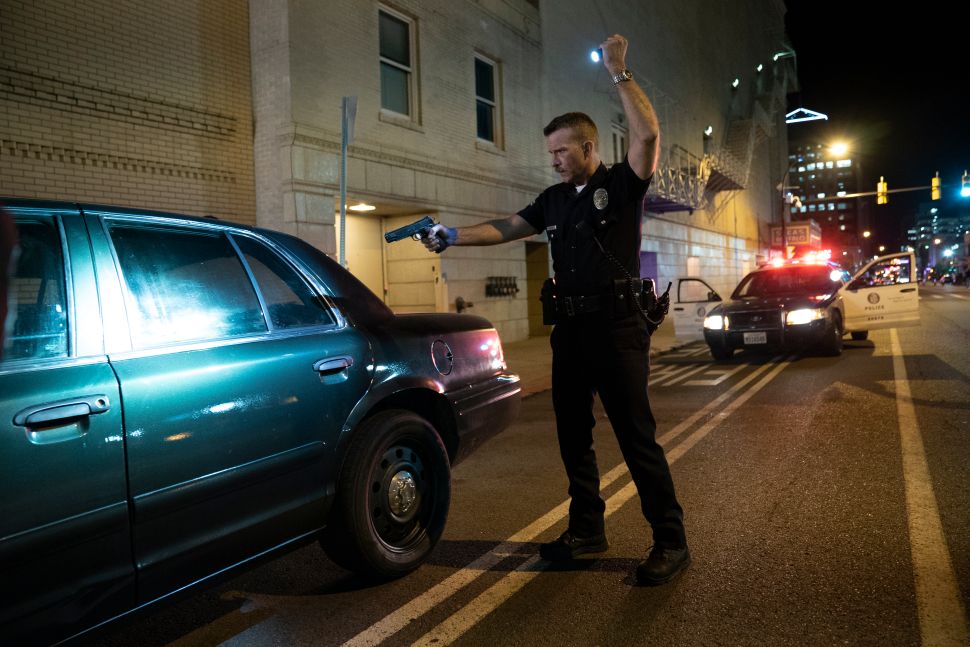