Whatever team Dread Scott is on, I want to join it. His charm, apparent immediately, rolls out in waves as he speaks with the passion and nasal intonation of a Dungeons and Dragon’s nerd, a role-playing game the artist spent his teenage years involved with. That background fits his latest project. On November 8 and 9, Scott will launch what will undoubtedly be the most ambitious and important artwork of the year with the help of the New Orleans-based non-profit, Antenna: Slave Rebellion Reenactment. Starting just outside of New Orleans, approximately 500 costumed rebels armed with machetes and muskets will retrace the steps of insurgents during the largest slave rebellion in the country’s history—the rebellion of 1811. Currently, the city’s only tribute is a bronze plaque in the middle of a traffic triangle that reads “major 1811 slave uprising organized here.” Prior to Albert Thrasher’s On to New Orleans, published in 1996, no books on the subject had been written.

With the need for commemoration palpable, the excitement in Scott’s voice grows as he speaks about the reenactment. “We start out with a small number of people and increase as we go downriver,” he said. Led by a handful of rebels on horseback, a crowd of people waving military flags and beating African drums will travel the German Coast, crossing St. Charles, St. James and St John Parish. “Black and indigenous people with machetes, muskets, sickles and sabers in period costumes will march and chant ‘On to New Orleans! Freedom or death! We’re going to end slavery! Join us!’” Scott described to Observer. Their hope—to establish an African Republic.

The rebellion this project reenacts was ultimately crushed by local authorities, a point of history the artist wisely opts not to include. “If people want to see white people killing black people, they can look at YouTube videos of cops murdering people,” he said. Instead, the performance will culminate in a celebration of the African rhythms that laid the groundwork for modern American music at Congo Square in New Orleans. “It’s going to be beautiful.”

On some level, the force and power of Slave Rebellion Reenactment feels like poetry. The fact that its history had all but been erased makes its mere presence remarkable. A budget of more than $1 million promises not just to draw national attention, but also provide the mechanism to properly remember the event. It will be documented by filmmaker John Akomfrah and live updates are available for those not able to attend on the website.

Like many important projects that seem all but inevitable by the time of their making, getting this one off the ground required near Herculean efforts by those involved. To start, the presenting organization, Antenna, operates with an annual budget of a little more than half of Slave Rebellion Reenactment’s total budget. With limited staff and resources, they’ve found ways to make the project work, piecing together funds from the Ford Foundation, Surdna and Open Society among others. “At times it feels like a real rebellion—like we’re working against all odds,” Antenna executive director Bob Snead told Observer. To wit, both Scott and Snead reported that less than a week out from the project’s launch, they were still actively engaged in fundraising. (Supporters can donate here.)

Scott champions Antenna like a sports fan might a football team. “Antenna ROCKS,” he said, citing a hands-on, in-the-trenches type approach that supports all aspects of production, from managing rehearsals, security, and even the organization of port-a-potties. Most artists at Scott’s level—well-known with a small to moderate collector-base—can’t get that kind of support. Scott knows this first hand—he told Observer he spent a year talking to Creative Time about presenting the project, an organization with a long history of launching large-scale public projects, but they ultimately passed because they considered it too risky. According to Scott, they felt that a project of this scale needed a bigger name for the fundraising to work. “And they have a point,” he said. The ability to offer limited edition prints by big name artists for donations goes a far way with philanthropists who maintain and build collections. (Creative Time declined to comment.)

Still, passing the project up seems like a missed opportunity for an organization that has dedicated itself to promoting socially progressive art. As Scott sees it, Slave Rebellion Re-enactment is a project that encourages participants and passersby to think about freedom through reckoning with the past. If we can see the past for what it was—violent and oppressive—perhaps we can better track its impact and enduring presence today. One obvious through line appears in the form of sickness. Originally a patchwork of sugar plantations that stretched back to the bayous near Lake Ponchartrain, the route now passes through an industrial area nicknamed “cancer alley.” Residents, many of whom are descendants of slaves, suffer from some of the highest cancer rates in the country.

Another, more palpable concern, though, is that of safety. While many onlookers will see the march through the lens of freedom that Scott intends, others may see something different—a crowd of armed black people. In a state where former Ku Klux Klan Grand Wizard David Duke ran for governor and got 39 percent of the vote, an abundance of caution must be exercised.

“We’re preparing for everything,” Snead told Observer, though he stressed that the organization has not gotten the sense that threat is imminent. “We’re working with the parishes, and coordinating with them, we have our own private security firm, and all actors go through de-escalation training. This is an art work and a film, not a protest, but we are preparing for anything that could come up.”

These concerns have had one unintended effect—bringing participants closer together. Now, that they’re full swing into rehearsals, the core of the project—getting people talking about why this 19th century event matters—is actually happening. “It’s a space for black people to talk about how to get free in the present,” Scott says. The timing of these conversations couldn’t be more urgent: armed racists now have the backing of the highest levels of government. More than this, though, Slave Rebellion Reenactment offers hope and empowerment in a moment when engaging in such ideas feels audacious. This is a project made against all odds, because a group of people believed in its importance. It won’t change the world, but it just might change the nation. 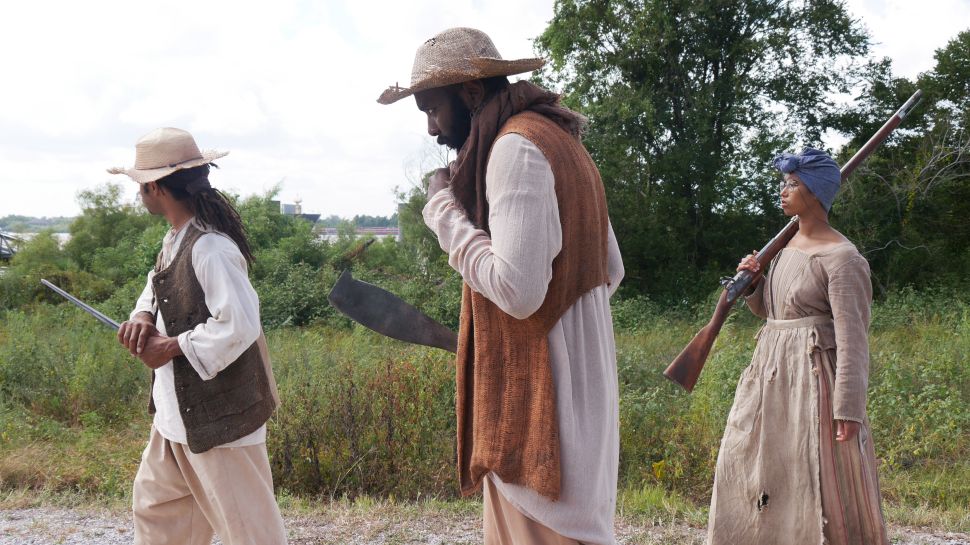