Hank Willis Thomas is a conceptual artist and sculptor who has made a name for himself as a vigilant translator of the human body into something enormously meaningful and totemic. More than a decade before the phrase “personal branding” became synonymous with regular, everyday social media culture, Thomas was making images of black men with the Nike swoosh emblazoned on their skulls to draw a link between “how slaves were branded as a kind of ownership, and [how] today we brand ourselves,” as he’s quoted as saying in the 2015 book Stick to the Skin: African American and Black British Art, 1965-2015. Thomas’ latest piece of public sculpture has now found a home on Tillary and Adams Street, adjacent to the Brooklyn Bridge. The work is titled Unity, and it consists of an enormous human arm pointing its index finger directly up into the sky.

New York Times art critic Martha Schwendener wasn’t overly enthused by the piece. “Muscular and appropriately proportioned, it suggests the arm of an athlete, echoing a smaller sculpture of an arm spinning a basketball on the tip of a finger that Mr. Thomas conceived in 2015,” she writes.

“Unity was originally called ‘We’re No. #1,’ a more assertive title, perhaps recalling the historical competition between the boroughs that reaches back to the 19th century,” Schwendener speculates further. “Unity is a traditional and fairly conservative work, accompanied in the official news release by a statement that sounds politician-worthy: ‘This sculpture is a homage to, and celebration of, the unique and multifaceted character of the borough of Brooklyn,’ Mr. Thomas says. ‘The spirit of Brooklyn has always been about upward mobility and connection to roots.'”

“The $284,000 project is also meant to pay homage to the borough’s unique character,” Artforum writes, not commenting on whether that aim was felt to be successful. And The New York Post captured opinions of passers-by, who made connections between everything from an Islamic hand gesture to Kings County Pride.

Once the sculpture has been around for a while longer, it seems inevitable that more opinions about it will pop up. However, it’s possible that maybe Unity’s frank simplicity isn’t quite weird enough to catch the attention of New Yorkers. 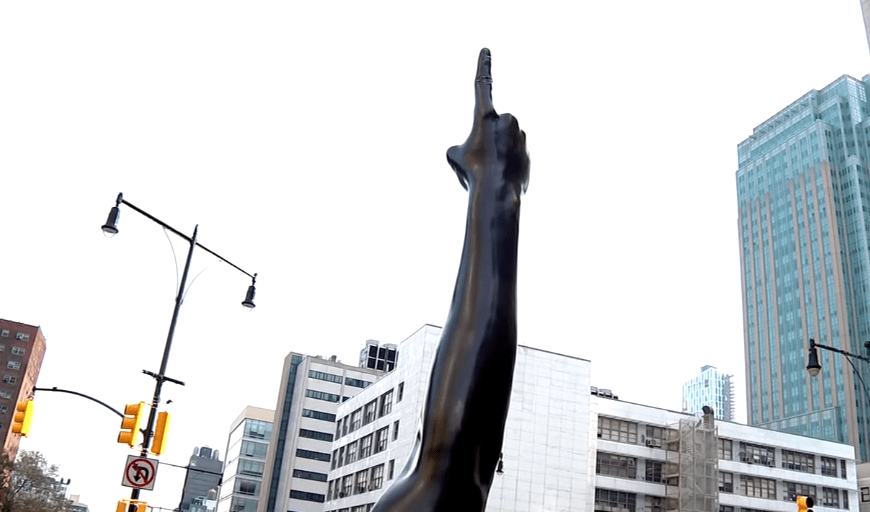