Honey Boy is a dolorous example of an alarming trend in modern movies—the miraculous ability of an infinitesimal talent to raise money for an obnoxious, self-indulgent film about his own life designed to appeal to absolutely nobody except the arrogant subject himself. In this instance, the jerky centerpiece in love with himself to the detriment of everyone in the audience is Shia LaBeouf.

SEE ALSO: In ‘The Etruscan Smile,’ Brian Cox Raises Familiar Material Above and Beyond Mediocrity

Here is an egomaniac famous for nothing more than making silly faces, wearing absurd hairstyles and acting too bizarre to adequately describe. I have never seen him on the screen in anything worth writing home about, although I almost got to see him onstage with Alec Baldwin in a Broadway revival of Orphans before he was fired in rehearsals for what the producer called “erratic, unprofessional behavior.”

Now we get his attempt to perhaps explain why he’s made a career out of amateurish antics. Apparently he never had a chance. In the screenplay he has written about his turbulent childhood, he calls himself Otis, a stressed out, self-made egomaniac in need of anger management who hopscotches back and forth in various time zones at two different ages—first as a 22-year-old actor (remarkable Lucas Hedges, who, as the only sane person in the cast, seems to be in a completely different movie) hospitalized after a car crash resulting from a dumb action-movie stunt. Flat on his back, he remembers himself at age 12 (Noah Jupe) living with the cruel, demented, abusive father he calls James (played by LaBeouf himself in a Cuisinart-chopped recipe for human incoherence). The rest of the movie follows suit to the letter.

The father is an opioid-addicted, ex-rodeo clown with a prison record and a long history of rehab stints. After serving three years for rape, he found religion and tried to raise his son while working the highway as a trash collector.

Under the undisciplined, first narrative-feature direction of Tel Aviv-born Alma Har’el, Honey Boy has no sense of narrative trajectory, jumping all over the place like a spastic bullfrog. LaBeouf doesn’t know how to tell a story in context, so the film evolves in a dizzying series of anecdotal swatches that come across like Ace bandages.

At 12, Otis the child actor sleeps in one room with his father in a crummy motel full of prostitutes. “The only thing my father ever gave me of any value is pain,” he says, and spends his life fighting anyone who tries to take that away. Already an alcoholic and a convicted felon himself as a young adult, he pays his dad to be a combination companion-acting coach-bully. Sometimes he gets punched in the face. Other times he is discovered naked, in the arms of one of the prostitutes. There is no arc. The characters are ambiguous. You can’t fill in the blanks.

Nothing leads up to any kind of logical finale. The last time we see anything of either of them, Otis is telling his father he’s so crazy that some day he’s going to write a movie about him. “Make me look good,” the lunatic says unapologetically. He doesn’t, and we have to endure all the endless suffering the boy can remember for more than an hour of misery. I don’t know about you, but this is not what I go to the movies for. Color it despicable. 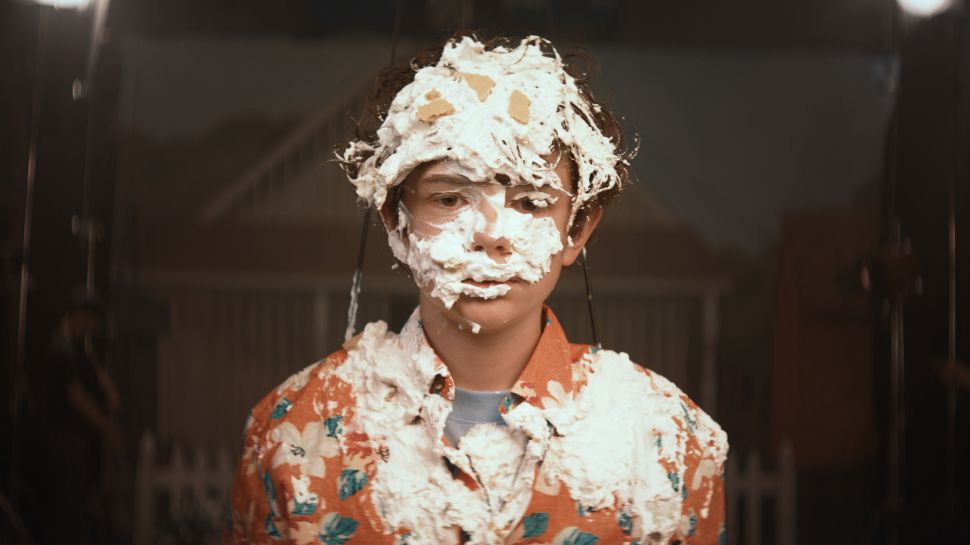