The 1990s were a dangerous and awful time. Along with Smash Mouth CDs and JNCO jeans, high school campuses were rife with cigarettes.

In 1997, 36.4% of high school students reported smoking at least one cigarette in the last month. Nearly 25% smoked every day.

If you told tobacco researchers or anti-smoking advocates in line for the Austin Powers premiere that, more than 20 years later, past-month cigarette use would decrease to 5.8%, and daily use would shrink to 3.6%, they might break out into a celebratory Macarena. It is 20 years later, and those are the numbers, but instead of dancing, they’re doomsaying—and all because of Juul.

Last December, Surgeon General Jerome Adams declared an e-cigarette “epidemic” among high school students. “Now is the time to take action,” he said. “We need to protect our young people from all tobacco products, including e-cigarettes.”

Juul, along with its very powerful and very tasty vapor machines, is the lead offender responsible for having “addicted a new generation of American youth” to nicotine, as Robert Jackler, a physician and professor at Stanford University specializing in tobacco research told The Los Angeles Times this week. On Monday, Xavier Becerra, the attorney general of California, sued Juul for allegedly marketing—and directly selling!—its products to teens.

If that’s true, by the standards of the 1990s, Juul is doing a terrible job. The data Adams used to declare a vaping epidemic revealed 20.8% of teens reported using an e-cigarette at least once a month. Among high school seniors, the cohort who use the most, daily e-cigarette use is at around 11%, according to data published in the New England Journal of Medicine in September.

So even with “teen friendly” flavors like mint and mango—flavors that also appeal to adults, including the adults who started smoking tobacco when Daria was on MTV—and an enormous company bent on hooking kids, significantly fewer teens today are using tobacco products of any kind at any frequency.

The fear is that e-cigarettes will wipe out all the gains made by anti-smoking efforts. That hasn’t happened yet, but we are trending that way—and the numbers Adams cited might be low.

More recent research conducted by Yale University scientists and published in the journal Drug and Alcohol Dependence found that 30.2% of high school students in four Connecticut high schools used a Juul in the last month, 25% of whom reported using one every day.

That said, it’s not like teens are uncontrollable: in this same study, teens reported being less likely to use Juul if their peers didn’t, and everybody complained about the high cost of Juul pods. So there are controls that can be applied that might slow or halt this trend.

All this to say that some teens are definitely using Juul devices, when before they were using nothing. However, it’s also fair to say that at least some percentage of teens are vaping—instead of using cigarettes, as their peer-group predecessors did.

Whether that’s “better” or “worse” will depend on two things: your evaluation of e-cigarettes, and your belief that a world free of addictive chemicals, like nicotine, is possible.

Cigarette smoking is the leading cause of preventable death in the United States. Smoking kills 480,000 people a year. Unlike moderate alcohol use, no level of smoking is “safe.” From a public health perspective, the only acceptable level of tobacco use is zero.

Given human habits and history, and given the existence of a market in which nicotine containing products are legal to buy and sell, it is hard to imagine a world in which nobody uses tobacco products of any kind. What techniques could be applied to achieve this? Prohibition will not work: Even if Congress could be compelled to pass a cigarette ban, cigarettes smuggled in from Mexico by cartels would become worth more than gold. Stronger controls like banning flavors or really, for real this time, keeping vapes out of kids’ hands might help, but they are not perfect.

Thus, the realistic outcome is “some percentage of teens will use vapes, and there is nothing we can do about it.” What’s the “acceptable” number? Who knows, but it must be more than zero, as zero is in the realm of fantasy.

At least part of the outrage over youths blowing clouds of vapor is the risk that those youths will switch to cigarettes. Will they? Well, some will, but it’s by no means guaranteed. According to the 2014 Youth Tobacco Survey, 68.4% of “current smokers” reported using e-cigarettes. Seems significant, but keep in mind that 55.6% of “never-smoking youth” also reported e-cigarette use. So while it appears some e-cigarette users will move on to cigarettes, many also will not. Some will also go straight to smokes and skip e-cigarettes entirely—what’s going on there? Great question, and one that’s lost in the miasma of Juul vapor.

Overall, even with Juul and bubblegum-flavored e-cigarette clouds, the nicotine problem is smaller than it was a generation ago. And if you listen to what experts at Public Health England say and believe that e-cigarette use is “95% less harmful” than tobacco cigarettes, what remains is a public health triumph.

The question that remains is how to keep e-cigarettes legal for adults, while keeping them out of the hands of kids. That will be a balancing act that will continue as long as these products exist—and one that needs less puritanical hysteria. The kids aren’t alright, but they’re better than they were. Any old millennial will tell you. 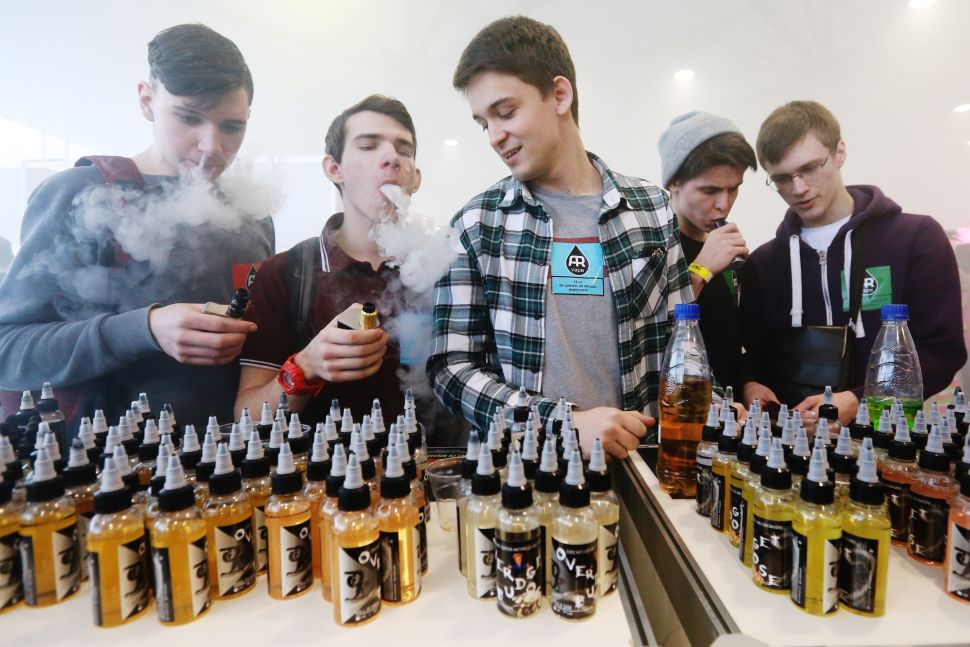