After more than 35 years, I think I’ve finally figured out what’s wrong with the Metropolitan Opera’s perennial production of Puccini’s La Bohème.

This Franco Zeffirelli production has been playing, essentially, forever: I first saw it as a telecast in the spring of 1982 and it was the first opera I heard at the Met when I moved to New York in 1987. (That was Hei-Kyung Hong’s house debut in the role of Mimi, and I can remember to this day how sheerly lovely it was.)

Since then, I’ve seen this staging every year or two, most recently last Wednesday, so I’ve been living with it for a good deal more than half my life. But, as I say, it’s taken me this long to put my finger on how the production goes wrong.

That has nothing to do with any prodigious analytical skills on my part; rather, it was a coincidence. As I exited the Met, walking briskly with the hope of making it to the subway station at Columbus Circle before the rain started, I heard screaming in Lincoln Center’s plaza.

Don’t worry: nobody was hurt. It was just a bunch of kids, a dozen or more, all in their late teens, running across the plaza, laughing and yelling and goofing around, climbing on the rim of the fountain to take selfies, that kind of thing.

The contrast of their boundless anarchic energy to what had gone on at the Met earlier (both on and off stage) was simply heartbreaking. To this middle-aged arthritic reviewer, those teens represented exactly what Puccini’s La Bohème is all about and what the Zeffirelli La Bohème gets exactly wrong.

It’s about youth: vital, headstrong, ignorant (or at least disdainful) of mortality. The artists and grisettes in the Puccini opera are teenagers too, and they share with those kids in the plaza the mistaken but breathtakingly empowering notion that they are the first generation of humans on the earth and that they will live forever.

But in the Met’s Bohème, youth is defanged and sentimentalized and therefore trivialized. According to Zeffirelli, youth is not a time for taking risks and making mistakes but rather an opportunity to indulge in kitschy posturing.

The production seems deliberately calculated to appeal to bourgeois taste, quaint and old-timey. The costumes look like costumes and the sets look like Christmas windows at Saks’. And the average age of the “teenagers” is about 40.

So there is no sense of danger, not even anything mildly unpredictable. Poor Mimi never has a chance: she’s dead the moment she walks in the door, and those wacky bohemians Schaunard and Colline dutifully perform shtick invented before their parents were born. (The Met’s Bohème is actually a revision of a production Zeffirelli first devised in 1963.)

The solid citizens singing the leading roles made this revival something a bit better than routine. Ailyn Pérez has a tangy lyric soprano with a touch of spinto edge on the top, providing dramatic chills with Mimi’s variously angry and helpless outbursts in the third act. As Rodolfo, the veteran tenor Matthew Polenzani found a sweet, almost childish light color for the “innocent” first half of the show, then amped up the heft impressively for the darker events later on.

The remaining principals mostly were unremarkable: healthy voices, well-coached, but without anything personal to say. Marco Armiliato’s conducting sounded, as always, impressively solid for an unrehearsed performance.

In Henri Murger’s Scènes de la vie de bohème (the source material for Puccini’s opera), a young artist breaks down at the funeral of his girlfriend and cries “Ô ma jeunesse, c’est vous qu’on enterre!” (Oh, my youth, they are burying you!) Sadly, that’s what the Met’s production of La Bohème does: kills youth dead and then embalms it. 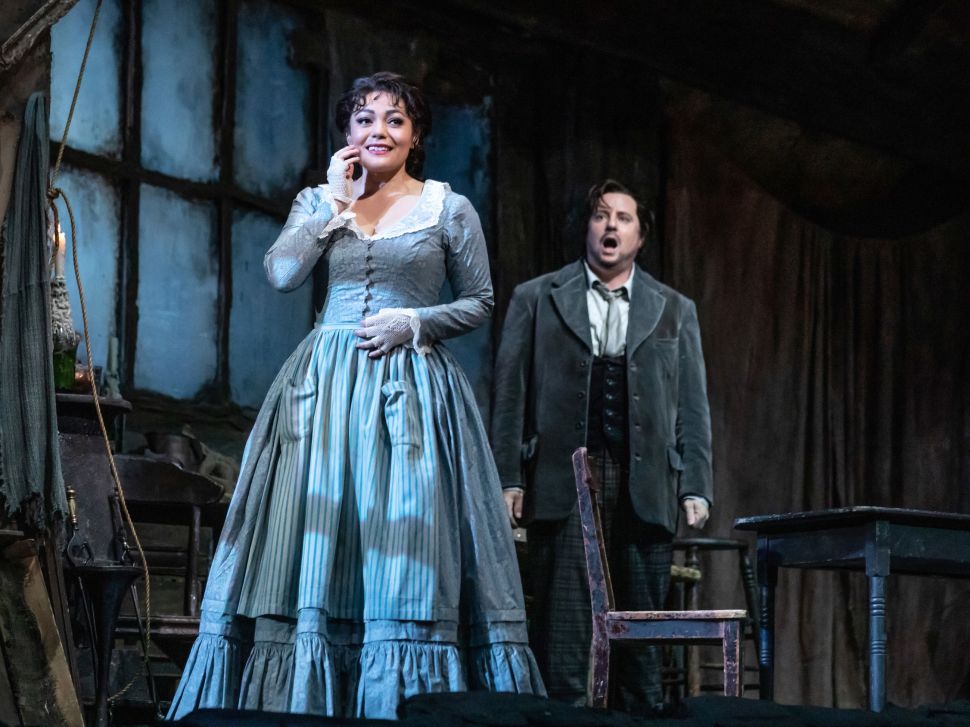