In Marriage Story, writer-director Noah Baumbach, the critical darling from Brooklyn who makes long, talky, snail-paced movies few people see outside of film festivals, now holds a mirror to the whining rigors of divorce. Now there’s a subject that is anything but fresh. It’s been investigated with more vigor hundreds of times by everyone from Ingmar Bergman to Woody Allen (Richard Brooks’ underrated The Happy Ending is a particular favorite of mine).

SEE ALSO: Police Procedural ‘Crown Vic’ Will Keep You Glued to Your Watch More Than the Screen

Oddly titled, Marriage Story is more about splitting up than hanging on, but Baumbach provides his own take on divorce with varying degrees of honesty and insight. The divorce part fades in and out of focus while the marriage part unravels in flashbacks. Sometimes they drag on so long you can’t tell the difference. Still, it’s intelligent enough to like it a lot in retrospect.

Nicole (Scarlett Johansson) is a perfect wife and mother and an actress of note, appearing in an avant-garde play that is a big hit off-Broadway. Charlie (Adam Driver) is a sensitive playwright and absent-minded husband who cries easily in movies, considers himself very competitive, and is very patient with fatherhood. Everyone envies them. They have mastered the challenges of marital maintenance, but privately his fame has surpassed hers and she feels like she’s living in his shadow. The movie is about how they end up estranged, separated, fighting for child custody, and headed for courtroom disaster.

She suddenly accepts the leading role in a TV series that requires her to move to Hollywood. With his play transferring to Broadway, leaving New York is out of the question. With changing perspectives and shifting priorities, it’s time for a change, although neither really knows why divorce is inevitable.

Instead of honoring their agreement to part amicably and leave lawyers out of it, they get stuck in a quagmire of legal entanglements. His first lawyer (Ray Liotta) is a cutthroat who charges $950 an hour. His second attorney (Alan Alda) is a hopelessly ineffectual mess whose sole job is to remind his client that he’s doing everything wrong. Her West Coast representative (a marvelous Laura Dern) is an empowered barracuda whose daily goal is to reduce men to ashes.

They bounce back and forth from coast to coast, incurring mounting expenses and frustration over their son’s inability to cope with his parents’ neuroses. What started friendly turns volcanic. Eventually, Nicole ruins Charlie’s reputation as a New York director and Charlie destroys his wife’s self-confidence. In the end, they are both living in Los Angeles, sharing responsibilities for raising their son, even though they are beyond the ability to reconcile their own differences. Some things never change, including deep, biding, confused affection.

Baumbach’s ease with guiding actors through winding roads of fluctuating emotional moods has never been more obvious. Johansson shows new sides in her range and ability and Driver makes some of the least mannered choices of his career. Personally, I never understood why the couple in focus considered their superficial problems serious enough to fail at working out their marriage in the first place. There are enough scenes of insight and feelings on display to warrant admiration, although they are sometimes maddeningly self-indulgent (at one point, Driver gets up and for no reason that makes any sense, sings the entire Stephen Sondheim aria “Being Alive” from Company).

I liked the movie (or select scenes in it) but even the scenes that work better than others are, like all of Baumbach’s screenplays, too slow, draggy and desperately in need of tighter editing for comfort, and two hours and 16 minutes for a movie about getting a divorce is twice as long as it should be. 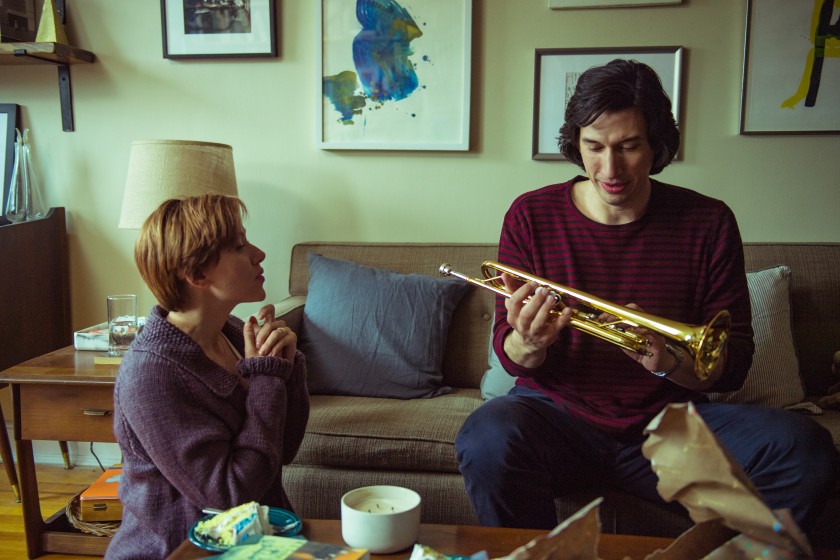