Motherless Brooklyn is a colossal bore written, directed and produced by Edward Norton, who plays a detective with Tourette’s syndrome named Lionel Essrog. (You can’t make this stuff up.) I have always admired him as an actor who sometimes makes unusual and startling choices in movies, but not always. (I find The Incredible Hulk hard to forgive, but maybe he needed a new pool table.) As a director, well that’s another filibuster altogether. He knows where to put the camera, block a scene, and yell “action!” even if he doesn’t know how to say “cut!” What leaves him clueless is coherence. Motherless Brooklyn is so messy, confusing and pointless that you don’t know what’s going on half the time, and couldn’t care less.

Based on a long, meandering book by cultish author Jonathan Lethem, it’s a laborious, lugubrious load of twaddle about…about what, exactly? You’re right to ask, and when this thing ends five minutes short of 2 and a half hours, you will probably be asking again. For some reason that is never clear, a man named Frank Minna (Bruce Willis) is murdered, leaving behind the four devoted disciples he rescued from a Catholic orphanage lost without a rudder.

Known as the Minna Men, they ran errands, grew up with the language and mores of the New York streets, and ended up running Minna’s business as gumshoes, real-estate dealers and limo drivers. Searching for clues to who knifed him, the men come across Mo (Alec Baldwin), the powerful head of New York slum clearance for urban development (and maybe corrupt parks commissioner) who is ripping off the city by controlling every construction job. Add up the kickbacks, grand larceny and postwar political crimes, and you get a movie that is all talk and no action, with so many plot twists you finally just shrug your shoulders and laugh out loud. At one point, when Norton sighs, “what’s it all about,” the laughs turn to cynical guffaws.

Convoluted and slow moving at the same time is a lethal formula for catastrophic box office success, and lines like “Brooklyn’s big, but there’s things even bigger” don’t liven things up much. The Lethem novel does not translate from page to screen with any clarity worth writing home about, and Norton’s daring, noirish, fifties quality lends an atmosphere of claustrophobia to the catatonic pacing.

Worse than the muddy incoherence is the pain of watching the director grope and crawl his way through 2 and a half hours of stammering, stuttering and twitching. Massive camera setups in Penn Station, car chases and jazz club performances, all on a rumored small budget, successfully manage to distract from the waste of a talented cast that includes Cherry Jones, Willem Dafoe, Dallas Roberts, Bobby Cannavale and the lovely Gugu Mbatha-Raw. They should all have stayed home watching re-runs of old George Raft movies. 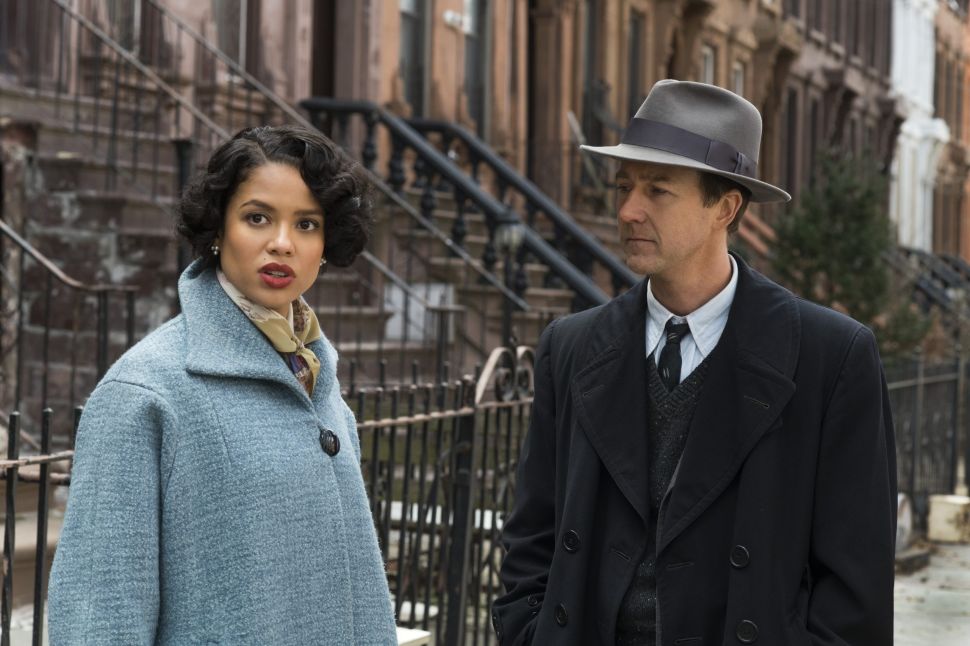