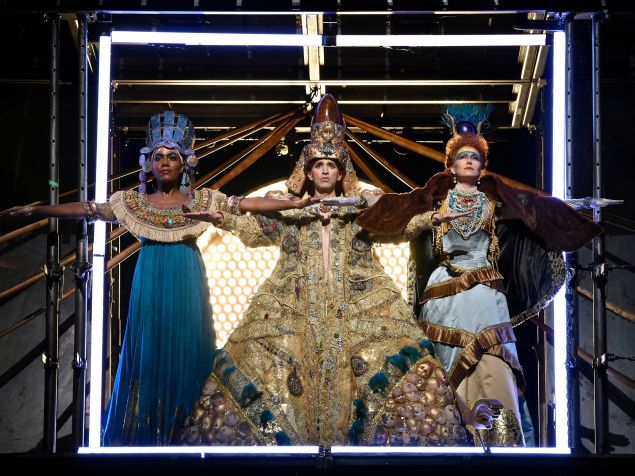 The melancholy opera Akhnaten, with its oracular texts and elegantly cool music by Philip Glass, seems an unlikely candidate for a gala performance at that temple of excess the Metropolitan Opera. But Friday night’s Met premiere of the 35-year-old work not only filled the vast house but won a noisy ovation for the cast, the creative team and the octogenarian composer himself.

If the joyous demonstration felt a little incongruous, that’s because the piece is anything but triumphant. It presents, as a series of tableaux, the stunted career of the pharaoh who dedicated his relatively brief reign to a quixotic task of religious reform: setting the sun-god Aten above all others in the Egyptian pantheon.

SEE ALSO: A Bougie ‘Bohème’ Returns to the Met

According the scenario for the opera, this experiment in what we now call monotheism is a failure. Akhnaten, oblivious to the practical needs of his country, is deposed and assassinated and his religious reforms rolled back. The ghosts of the royal family lament for a while and then join their funeral procession.

Glass’ music is appropriately pensive through most of the piece, reflecting perhaps the protagonist’s distant and contemplative persona. The second act features two lovely extended pieces, a rich duet for Akhnaten and his queen Nefertiti and a solo of chaste sweetness as the pharaoh worships Aten.

The Met obviously put a lot of care into this presentation, and if there was a single weak spot, it was the playing of the orchestra. Despite what seemed to be sterling intentions on the part of debuting conductor Karen Kamensek, the trademark hypnotic arpeggios so key to Glass’ style sometimes sounded just a hair uneven. This issue was particularly prominent in the A minor prelude to the first act, which seemed to drag on forever.

Director Phelim McDermott and his team set the action mostly in a narrow strip of staging area before a tall structure indicating  scaffolding, an allusion to Akhnaten’s ambitious temple construction projects, perhaps. The everyday intricacies of the Egyptian court—as seen through our modern fascinated but uncomprehending eyes—McDermott suggested with a troupe of jugglers.

Yes, there was a lot of juggling, but frankly I found that element better worked out than McDermott’s less than imaginative choreography for the principal characters. The slow-motion lateral crosses of the stage may have been intended to suggest the formal flatness of papyrus paintings, but in combination with Glass’ music the glacial movement felt derivative of Robert Wilson.

But in theater just about anything can work if a performer is committed enough, and in countertenor Anthony Roth Costanzo in the title role McDermott has found his muse. Even ideas that might sound outrageous on paper, e.g., Akhnaten’s “birth” from a mummy case, totally nude, and his slow scene of being dressed by a dozen attendants, felt absolutely organic and true.

Costanzo’s slight, slim figure and his rapt attitude perfectly indicated Akhnaten’s unworldly nature, and he was at his most compelling in the simply-staged numbers of the second act. Especially breathtaking was the finale of that act, when Costanzo, draped in trailing flame-colored silk, solemnly ascended a long flight of stairs on an otherwise bare stage.

That act also featured his best singing of the evening, when he smoothed over a brash quality in his voice heard earlier, and sang pianissimo in a gorgeously sustained “Hymn to the Sun.” In an ideal world, an Akhnaten might offer a more intrinsically lovely tone, but Costanzo’s artistry created a beauty of its own.

Sadly, his sound didn’t blend particularly well with the sumptuous mezzo of J’Nai Bridges (Nefertiti) in their love duet, though, again, their superb musicianship was palpable. The mournful final trio of the opera worked much better, with their voice complemented by the icy high soprano of Dísella Lárusdóttir as Queen Tye.

The casting of bass Zachary James as Akhnaten’s father and predecessor Amenhotep III was a masterstroke. His imposingly tall and muscular figure, in combination with his booming voice, created an archetype of royal power in contrast to the recessive, poetic Akhnaten.

The protean Met chorus sounded truly monumental in all the various languages of the libretto, and even managed a bit of juggling on their own.

Yes, Akhnaten is decades overdue for a Met appearance, but thanks to Philip Glass it doesn’t sound a bit dated. Even presented in a less than ideal way, it’s perfectly spellbinding. 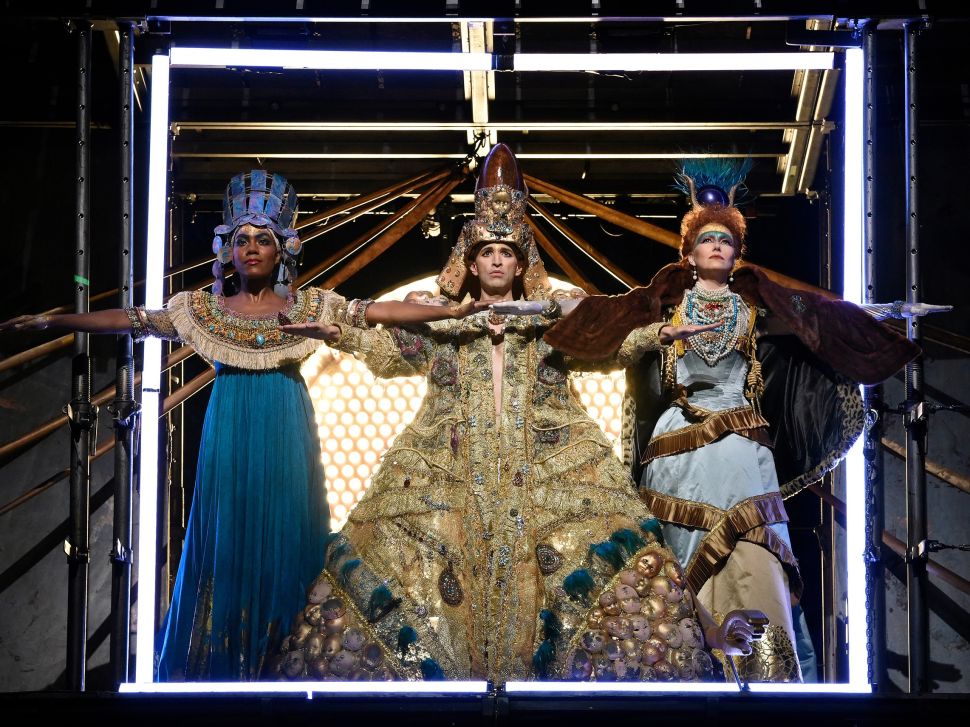