In Salesforce CEO Marc Benioff‘s new autobiography Trailblazer, the billionaire entrepreneur dedicated a generous stack of pages to revisiting a career anecdote from 2015, when his president and chief people officer at the time, Cindy Robbins, lobbied him to order a company-wide compensation assessment. This subsequently led Salesforce to spend three rounds of financial boosters totaling nearly $9 million to finally close the pay gap between male and female employees at the 40,000-people company.

Since then, Salesforce has been celebrated as a role model in achieving gender pay equality, staff diversity and other cultural workplace metrics among large tech companies. And Benioff, with his high-profile philanthropic efforts and civic engagement, has earned a reputation as “the nice guy in Silicon Valley.”

SEE ALSO: Why Billionaires Are in Panic Mode to Save Capitalism From Itself

But, is Salesforce’s success story replicable for the rest of the male-dominated tech industry? After all, not every boss is as pro-reform as Benioff. And, even if they are, not every CEO can afford a multi-million-dollar budget to implement drastic changes.

Earlier this month, Observer spoke with Robbins, who left Salesforce in May after 13 years, at the Riveter Summit in New York City about these topics. She also shared advice on how to negotiate a raise with a tough boss and how to push for managerial changes within a company.

Marc Benioff told a pretty impressive story in his book about how Salesforce closed the gender pay gap. Unfortunately, not everyone has a boss like Marc Benioff. And a large portion of the workforce is employed by much smaller companies—many of which are privately held and not subject to the same level of public scrutiny as Salesforce. Do you think Salesforce’s practice is replicable at those firms at all?
Absolutely! When we are talking about rewriting the rules in the workplace, it’s no longer about the management team or the CEO rewriting the rules in the workplace. It’s about the employees. They should come together as a team and say, “Hey, we should be looking at diversity more” or “We should be looking at women in the workplace more.” It’s a bottom-up approach.

So, it’s not about finding the Marc Benioff. If there’s something that you believe you’re passionate about and you want to change in your company, try finding coworkers who feel the same. It’s more comfortable in many ways when it’s not just one person going up a hill. You’re all going up the hill together.

What about startups? I think, before we talk about closing the pay gap, one of the barriers facing minority groups at small offices is that it’s hard to prove that the pay gap exists and that it’s a systematic problem because the sample size is too small.
I’ve talked to a lot of young CEOs who are starting their companies, and what I tell them is: What an opportunity you have right now!

For a company like Salesforce, the discussion was often “would’ve, could’ve, should’ve” like back in 1999. But we didn’t know better. I believe Marc said in his book that there was no management class in college in his time that told you this is something that you should be looking at.

These CEOs who are just starting their companies have such a great opportunity to do this from the ground floor and do it now. Put together a  job architecture system that makes sense. Put together your compensation practices. Be transparent with your employees about your compensation philosophy. Because the more you can be transparent as a company, the more fulfilled your staff is going to be.

What advice do you have for women who are thinking about asking for a raise?
You always hear people say that women should speak up, that women should say this or ask that. It’s just still really hard to do, because you don’t want to be seen as the complainer or the difficult one.

My advice is, think about the questions you are going to ask or be asked. When you are asking for a raise, what are the components about why you’re asking? Is it because you feel your performance has been stellar? Is it because you talked to somebody and feel you’re not being paid in a fair way? You have to think about those questions. Don’t just say, “Well, I’m not comfortable with my pay” or “I think I should be paid more.”

When Salesforce began its effort to readjust the proportion of men and women in executive positions, Benioff set a target that there should be 30% women in a typical management meeting, based on the gender split of Saleforce’s entire workforce. Do you think that’s a good benchmark? Would 50% be more fair?
That’s a very big question. Is 30% the right number? Maybe not. Maybe it is a starting point, and then in the following years, the number should be going up. I think for any company you want to keep progressing up. You want that 30% to become 35, 40 and eventually 50.

Also, it’s not just about getting a seat in the room. As women, you need to know why you earned that seat. In my case, it’s not because I’m filling the 30% but because I’m doing well. It might be luck that got you invited to the first meeting, but then it’s your responsibility to stay in that room and get invited to the next meeting and the meeting after that. 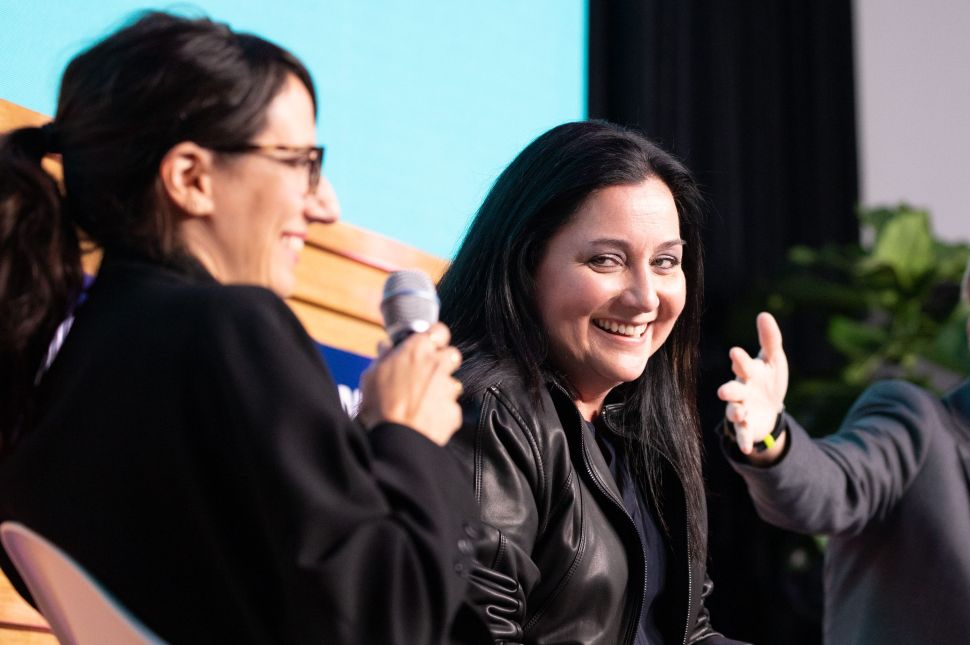