Disney bet big on The Mandalorian, the first-ever live-action TV series set within the Star Wars universe and the flagship original show of fledgling streamer Disney+. Estimates peg its cost at around $15 million per episode, making it one of the most expensive series on the small screen. Fortunately for Disney, the gamble appears to be paying off.

The Mandalorian earned nearly 40 million “demand expressions” during the week of Nov. 10-16, according to data provided to Observer by research firm Parrot Analytics. The firm tracks video streaming, social media activity, photo sharing, blogging, fan and critic rating platforms and other consumer demand sources to put together a composite of viewership and growth. Demand expressions represent the total audience demand being expressed for a title within a market and not specific viewership statistics.

SEE ALSO: Nicole Kidman Says a Third Season of ‘Big Little Lies’ Is Up to the Creatives

Disney+ launched on Nov. 12 and in its first four days, United States audience demand for The Mandalorian topped popular streaming hits such as Amazon’s Good Omens, Netflix’s The Umbrella Academy, When They See Us and The Dark Crystal: Age of Resistance.

However, The Mandalorian is not the most in-demand streaming series over the same time period as Netflix’s Stranger Things, arguably the most popular streaming series in the world, and DC Universe’s Titans bested the new Star Wars chapter. 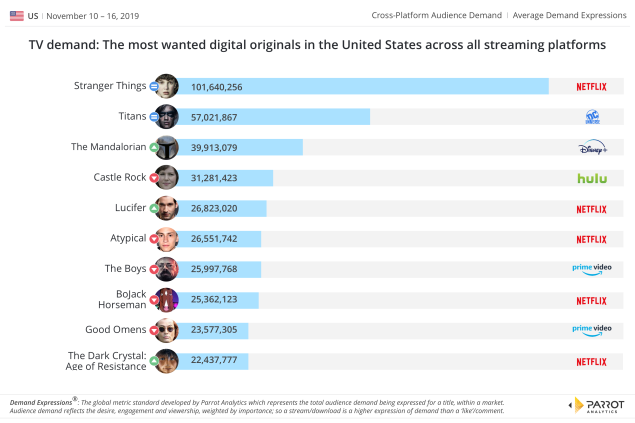 Given Disney+’s episodic release strategy, the research firm expects demand for The Mandalorian to continue to grow further as new episodes become available to stream over the next several weeks. Episode 3 will be made available Nov. 22. The remaining episodes will hit Disney+ on Nov. 29, Dec. 6, Dec. 13, Dec. 18, and Dec. 27.

Bolstering Parrot’s conclusion that The Mandalorian is a highly in-demand title is TV Time’s data. TV Time is a multi-platform, virtual TV tracking community of millions of users that calculates week-over-week growth in episodes watched for a given program—that’s how it determines which shows are on the rise. For the week of Nov. 11-17, The Mandalorian earned TV Time’s No. 1 position with a rise ratio of 100 percent.

Industry observers are forced to rely on third-party audience metrics to paint a picture of ratings and demand as major streaming services such as Netflix and Amazon only release select viewership data lacking in uniformity. Nielsen tracks both streamers in a limited capacity, those these numbers are often refuted by the platforms.

The Mandalorian takes place roughly five years after Star Wars: Episode VI—Return of the Jedi. It follows the titular bounty hunter (Pedro Pascal), a lone gunfighter makes his way through the outer reaches of the galaxy, far from the authority of the New Republic. It is written and created by Jon Favreau. 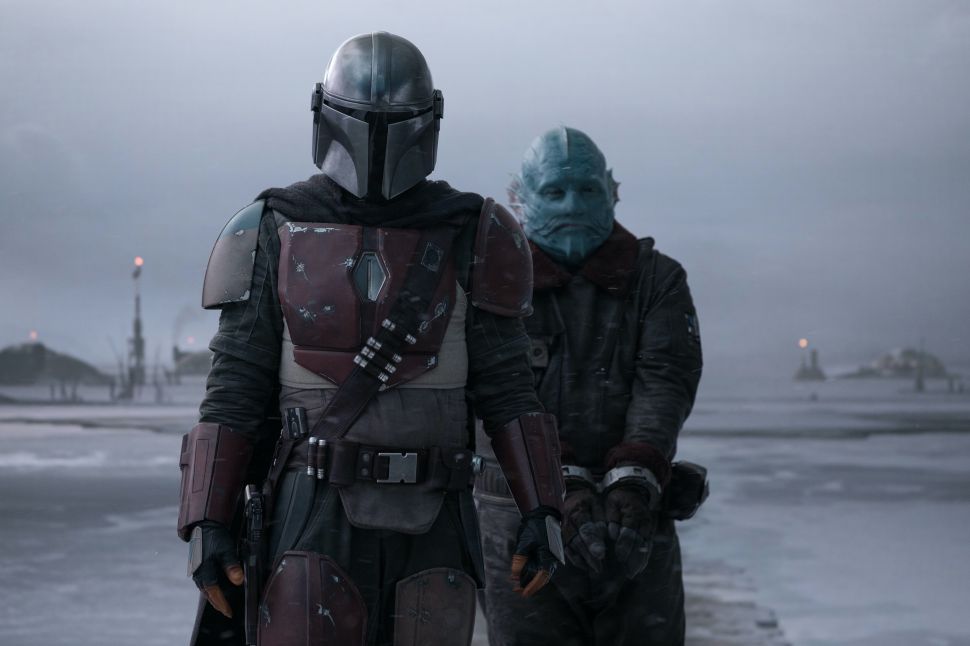