We knew The Mandalorian, the first-ever live-action Star Wars series headlining Disney’s new streaming service Disney+, was going to be popular. But we didn’t know how quickly it would fail or succeed in establishing itself as a flagship series for Disney’s new platform and a force to be reckoned with in the streaming arena.

Less than two weeks after debuting on Nov. 12, The Mandalorian—which takes place five years after Return of the Jedi—is officially the most in-demand television series in the United States across all platforms, according to data provided to Observer by research firm Parrot Analytics.

SEE ALSO: J.J. Abrams on Ending the ‘Star Wars’ Saga With Something ‘Unexpected’

The show has nearly tripled its demand week-over-week as Disney+ opts for a traditional weekly release schedule as opposed to Netflix’s binge method that provides all episodes for viewing at once. Speaking of Netflix, The Mandalorian‘s surge has ended Stranger Things‘ 21-week reign as America’s most in-demand digital exclusive series. 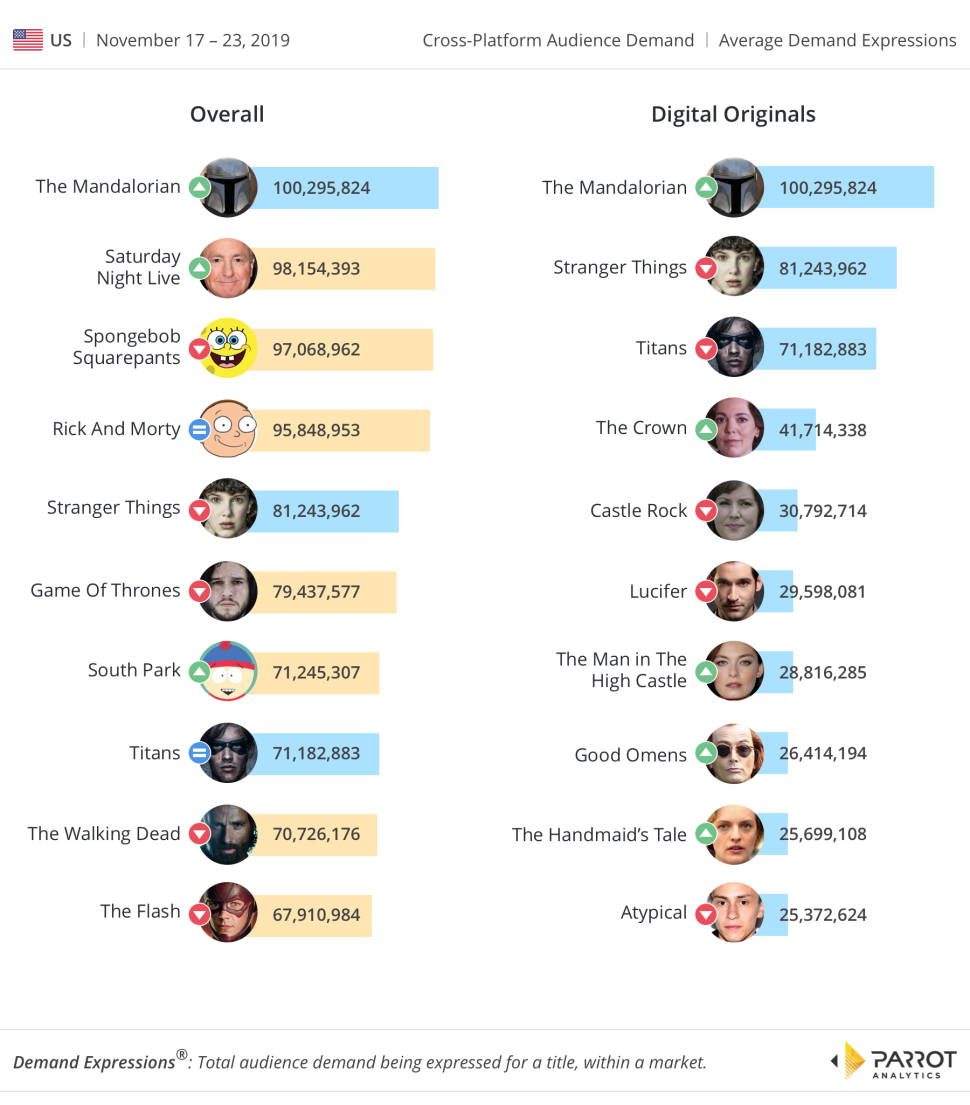 As linear weekly live viewership has become increasingly obsolete, major broadcast networks, such as ABC and Fox, have dropped Live + Same Day ratings reports in favor of Live + 3 Day and Live + 7 Day metrics. The same holds true for popular weekly streaming series that can be consumed at any time. Parrot’s data tracks with strong pre-release, +4 day and +7 day demand for Disney+’s flagship original.

The Mandalorian‘s steady growth is even more impressive given the fierce competition it faced this past week. Almost every title in the top 10 gained at least 15% more audience TV demand compared to the week prior. Amazon’s The Man in The High Castle aired a series finale and the third season of The Crown is still reaching viewers after its Nov. 4 debut. The exception to this is Stranger Things, which experienced a 20% drop in demand. As a result, the sci-fi show fell four places to fifth.

While demand is a metric that should not be confused with subscriber numbers, Parrot’s data suggests that the Star Wars series is driving a lot of sign-ups to the recently debuted Disney+ service. The new platform earned more than 10 million sign-ups in its first day, though that figure does not exactly translate to raw subscribers. Disney executives are reportedly aiming to attract between 60 million and 90 million worldwide subscribers by 2024. Currently, it houses more than 7,500 episodes of television and more than 500 movies. Within a year, the platform will boast more than 45 originals, and by 2024, Disney’s goal is to release 65 annual exclusives.

Parrot Analytics tracks video streaming, social media activity, photo sharing, blogging, fan and critic rating platforms and other consumer demand sources to put together a composite of viewership and growth. Demand expressions represent the total audience demand being expressed for a title within a market and not specific viewership statistics.