About 35 minutes into Tina: The Tina Turner Musical, I began to feel very protective toward the title subject. I battled the urge to jump onto the Lunt-Fontanne stage and angrily defend Tina from all the torture and humiliation going on. Call it patriarchal, call it white saviorism, but I found the great singer’s treatment despicable. And I don’t mean the years of physical and emotional abuse Tina suffered at the hands of husband and bandmate Ike Turner. No, the comeback queen of rock and the phenomenal actress playing her—Adrienne Warren—were trapped in a needlessly shoddy, demoralizing dud.

If any pop-music survivor has a story to tell, and a richly entertaining voice to tell it in, it’s Tina Turner. And tell it she did, with Kurt Loder, in her 1986 autobiography I, Tina, which was the source for the juicy 1993 biopic What’s Love Got to Do With It. The latter starred a volcanic and ripped Angela Bassett, hell-bent for Oscar gold (the award went to Holly Hunter in The Piano). Just skimming the book, you can see how Turner’s voice—wry, wily, deeply spiritual but arch and gritty, too—has cast an irresistible spell over the decades in song and films (including, yes, the underrated Mad Max: Beyond Thunderdome).

Here’s I, Tina (she was born Anna Mae Bullock) on her lonely childhood in tiny Nutbush, Tennessee: “I felt like a complete outsider, the only one of my kind. So I just went off by myself, out in the world, to walk in the pastures and be with the animals…I didn’t have anybody, really, no foundation in life, so I had to make my own way.” On first seeing Ike Turner playing in a club: “His teeth seemed all wrong, and his hairstyle, too—a process thing with waves that lay right down on his forehead. It looked like a wig that had been glued on. When he got closer, I thought, ‘God, he’s ugly.’” The book is stuffed with such salty, vivid gems, which helped make the film a lurid but honest account of Tina’s rise to fame and then her fight to escape a domestic nightmare.

But that voice is missing on Broadway. In many jukebox musicals, like Jersey Boys or Ain’t Too Proud, the book writers gravitate toward narration, the better to ground the star as our storytelling hero, and to telescope the events of decades. But Katori Hall, Frank Katelaar and Kees Prins, don’t let Turner annotate her life directly to the audience, which puts the burden of storytelling on dramatizing each milestone. Scenes lurch from one to another with all the grace of a Wikipedia entry, exposition is shoehorned in with laughable bluntness, and the script-doctoring budget clearly went to the wig department. When the book writers and director Phyllida Lloyd foreshadow Ike’s drug habit, a floozie enters a room full of people, wagging a baggie of coke and saying she has his “delivery.” To depict his infidelity, Ike runs into Tina while stumbling through a door with a woman in tow, ostentatiously zipping his fly. The emphasis in on Tyler Perry-level melodrama and vulgar laughs, rather than a credible portrait of the times and our heroine’s journey to self-possession. Why would a person of Tina’s strength put up with Ike’s abuse? Was Ike deeper than a sadistic sociopath? These questions hang in the air unanswered, beside pages and pages of DOA dialogue.

Let’s take a second and underscore a positive fact about Tina. Unlike other jukebox musicals about great women in pop—Beautiful—The Carole King Story, The Cher Show, and Summer—Tina is a woman’s joint. There’s Hall, and the staging is by Lloyd, who spun gold from the ABBA catalogue in Mamma Mia! Ladies at the creative core is a definite plus.

If only the results were better, or the book had a stronger POV and feminist message. It’s impossible to know which of the three writers is responsible for specific inelegant lines or lumpy scenes. Hall (Hurt Village and Our Lady of Kibeho) is a proven, talented playwright. But I’ve never heard of Katelaar and Prins, Dutch TV and stage writers. Their big hit, Playbill tells us, is the musical Hij Gelooft in Mij, which Google translates into He Believes in Me. I can only assume that Hall got her partners’ contributions in Dutch, also cranked them through Google, and slapped them into the script. That’s the only way to explain the desiccated, flattened quality of many of the scenes, which serve—as in the worst of this genre—as cheap excuses for hit songs.

The act division is ill-judged. Before intermission we follow Tina from her broken home in Tennessee to later reuniting with her mother and sister in St. Louis, Missouri, meeting Ike (Daniel J. Watts), joining his band, and the 16 or so years of making music, touring, Ike’s drugged-up crackup, Tina’s embrace of Buddhism, and Ike’s chronic battering and belittling of Tina. The first act arc ends with Tina’s dramatic self-emancipation from Ike after a particularly bloody brawl in Las Vegas. That makes the second act all post-Ike, with Tina’s years gigging in Las Vegas, staving off poverty, until she is “rediscovered” by Australian pop producer Roger Davies (Charlie Franklin). Problem is, this part of the story—which the movie wisely compressed in the final 15 minutes—is not particularly dramatic. Tina goes to London to record synth-heavy ’80s tracks such as “What’s Love Got to Do With It,” “Private Dancer” and others; they’re hits; her stardom is reborn. The second act feels padded out and dramatically inert, culminating with the comically nonsensical placement of “We Don’t Need Another Hero” as rueful Tina scatters her problematic mother’s ashes. “All we want is life beyond…Thunderdome,” Tina croons meaningfully, and we can only assume Thunderdome is a metaphor for, um, emotionally withholding parents?

Elsewhere the score features predictable crowd-pleasers and showstoppers: Ike and Tina’s funky, souped-up cover of “Proud Mary,” Tina’s red-hot version of “Disco Inferno” and the iconic Phil Spector production, “River Deep—Mountain High.” When performed in the context of concerts or recording sessions, these numbers work and sound terrific. It’s when the book writers and music supervisor Nicholas Skilbeck try to fold them into scenes that things get silly. Repurpose the late self-respect stomper “Better Be Good to Me” early in Tina’s relationship with Ike? Looks good on paper, but the set-up’s a perfunctory stretch of getting-to-know-you dialogue that culminates in Ike’s generic marriage proposal: “We could be the King & Queen of Soul & Rock & Roll, baby.” In terms of audience-insulting shorthand, that clunker is only outdone when Phil Spector (Steven Booth) purrs, “That Phil Spector wall of sound is all we need.”

Are these deficits—dreadful book, lopsided dramaturgy, uneven cast (Watts’s Ike is a petulant, cartoon villain)—overcome by the supernova talent and charisma of Adrienne Warren? The singer-dancer-actress is stupendous, a flesh-and-blood Hirschfeld drawing with her luminescent, toothy grin, eyes that melt hearts in the rear balcony and a smoky pop mezzo that channels the “screaming dirt” quality of Tina’s primordial blues belt. Warren does those crazy, manic dances with the Ikettes, her legs spin and pivot with pubescence-igniting power—all in heels. And she makes it look like the most fun in the world. Criminally, the the grace and boldness of Warren’s performance exists in inverse proportion to the wayward and witless material around her. There’s a lot of spirituality poured over the production—its opening vocals juxtapose Tina’s Buddhist meditation prayer, First Nations chanting and a Baptist deacon firing up the congregation. But while the electrifying Warren deserves instant worship and tribute, the show around her borders on sacrilege of a living goddess. 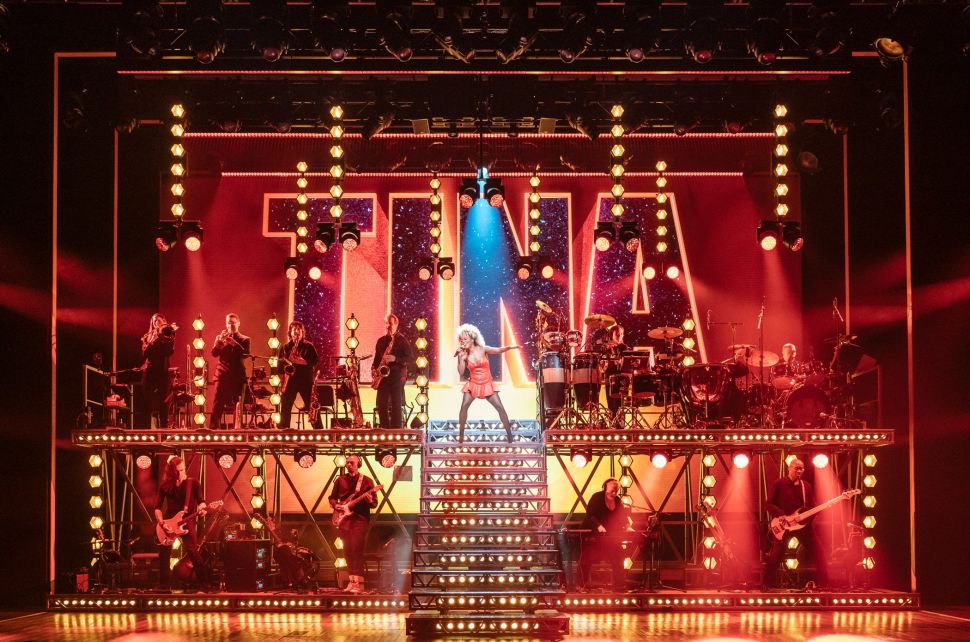