The Walt Disney Co. stockpiled all of its biggest blockbusters in 2019 so that its ambitious new streaming service, Disney+, would arrive fully loaded. That day is finally here, as Disney+ launched in the United States, Canada and the Netherlands on Tuesday for the Netflix-stopping price of just $6.99 per month. And in an attempt to immediately scale up its subscriber base, Disney has partnered with Verizon to offer 12 months at no extra charge.

Thus far, there’s been a bit of confusion surrounding the offer, so we’re here to explain how to sign up, who is eligible for the deal, how long it’s available and where you can find Disney+ in your digital lives.

Back in October, the two companies announced that a one-year subscription to Disney+ would be made available to certain Verizon Fios and Verizon Wireless customers for free. On Disney’s earnings call last week, CEO Bob Iger revealed that this will cover about 20 million domestic Verizon customers, providing Disney+ with a strong foundational building block.

An annual subscription to Disney+ costs $69.99 while a monthly subscription runs $83.88 over a full year. If you’re eligible for the free one-year deal, we suggest you take it.

New and existing 4G LTE and 5G wireless “unlimited” customers as well as new Verizon Fios and 5G Home Internet customers all qualify for a year of Disney+ at no extra charge. This includes Verizon Wireless unlimited cell phone plans. As part of the deal, Verizon customers can enjoy everything Disney+ has to offer, including high-quality and commercial free viewing, up to four concurrent streams, downloads for offline viewing, personalized recommendations, and the ability to set up to seven different profiles

“Giving Verizon customers an unprecedented offer and access to Disney+ on the platform of their choice is yet another example of our commitment to provide the best premium content available through key partnerships on behalf of our customers,” Verizon Chairman and CEO Hans Vestberg said in a statement last month. “Our work with Disney extends beyond Disney+ as we bring the power of 5G Ultra Wideband technology to the entertainment industry through exciting initiatives with Disney Innovation Studios and in the parks,” he added.

“The launch of Disney+ kicks off a new era of streaming for the Walt Disney Company, bringing nearly a century’s worth of content from our iconic studios to consumers directly,” Kevin Mayer, chairman of direct-to-consumer & international at the Walt Disney Company, said in the same statement. “We’re excited to share this moment with Verizon and bring Disney+ to the millions of customers across its award-winning wireless network.”

The offer went live on Verizon’s website on Nov. 12 at 6 a.m. EST and once the 12-month promotional period comes to an end, your subscription will be automatically renewed. As of now, the deal will last through June 1, 2020. The free year of Disney+ will begin upon enrollment within that window.

Consumers can subscribe to Disney+ directly at DisneyPlus.com or via in-app purchase from the following partner platforms and devices (dependent on country):

Disney+ will launch next week in Australia, New Zealand and Puerto Rico on November 19. On Disney’s earnings call last week, it was announced that Disney+ will launch in markets across Western Europe—including the UK, France, Germany, Italy, Spain, and a number of other countries in the region—on March 31, 2020. 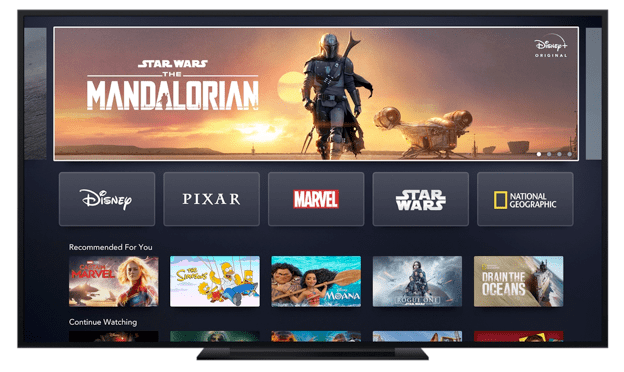