For almost 30 years, artist Arturo Di Modica’s Charging Bull sculpture has represented an iconic slice of New York City culture, which has made it one of the most visited and photographed attractions in Manhattan—nearly every day and in all kinds of weather, tourists can be found lining up to take a picture. For almost all of its existence, the sculpture has had a home on a slightly precarious, traffic-congested slice of Bowling Green, at the point near Battery Park where Broadway forks into two separate streets.

However, on Thursday, city officials said they would be moving the sculpture to a different location after citing safety concerns. “The city is moving ahead with plans to move the Bull to protect the safety of New Yorkers,” Mayoral Deputy Press Secretary Jane Meyer told The Wall Street Journal.

SEE ALSO: New York Gets Its Own Version of Anish Kapoor’s ‘Bean’

Arthur Piccolo, a spokesman for Di Modica and the chairman of the Bowling Green Association, also told the Journal that in making the decision to move the sculpture, city officials had referred to a study of potential terror targets after a 2017 incident wherein a man killed eight civilians in downtown Manhattan with his truck. The sculpture itself has been frequently defaced and pockmarked over the years, either in the course of protest or because a random passerby happened to take their anger out on it.

In September of this year, a man battered the sculpture with a metal banjo while cursing out President Donald Trump until gashes were left in the bull’s horn. During a climate change march in October, Charging Bull was doused in fake blood to symbolize the damage being done to the world overall. Even Mayor Bill de Blasio himself has denounced the sculpture as “a celebration of unfettered capitalism.”

Despite these compounding narratives, Bowling Green and the surrounding area has always been a site where public sculpture could be seen. Staten Island artist Joe Reginella has been making monuments to freakish New York City history and placing them in Battery Park for years, and Kristen Visbal’s Fearless Girl statue on Wall Street has similarly been the topic of heated debate. Wherever Charging Bull ends up, you can bet it’ll still get visitors, and according to CNBC, it won’t go far: the plan is to take the sculpture to a pedestrian plaza closer to the Stock Exchange. 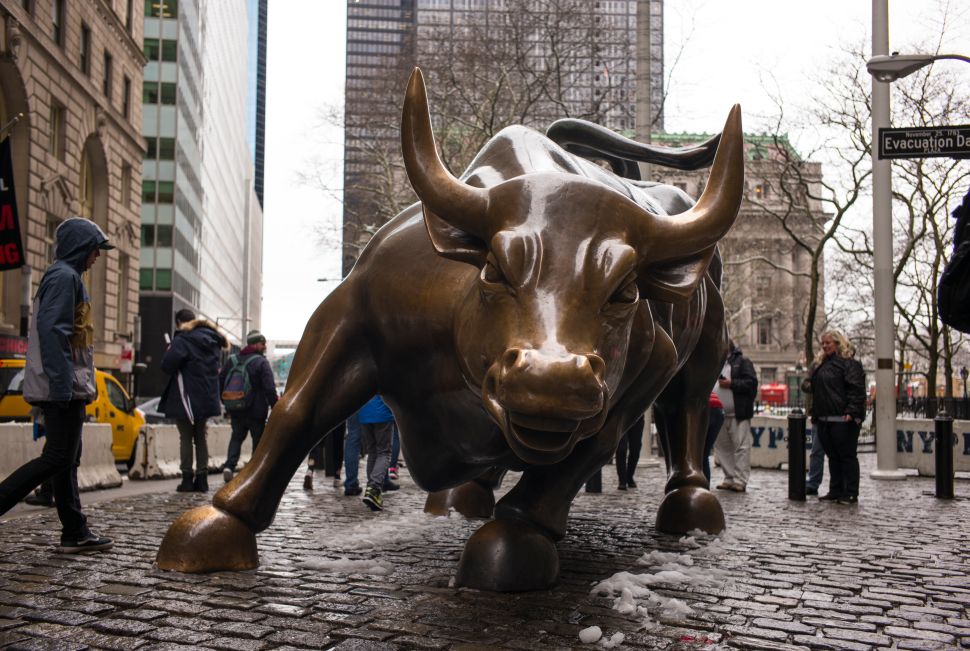