HBO’s Watchmen is set 30 years after the events of Alan Moore and Dave Gibbons’ graphic novel of the same name, featuring original and new characters both in and out of disguise. Building a world based on a revered piece of work is a challenge showrunner Damon Lindelof has met head-on, embracing fan favorites and creating new ones. Audiences familiar with the novel are likely to have spotted a number of Easter eggs throughout, but major revelations in this week’s episode, “She Was Killed by Space Junk,” confirm the identity of a pivotal Watchmen player via a costume unveiling.

The show’s costume designer, Meghan Kasperlik, is no stranger to the world of superheroes, having assisted on The Dark Knight Rises and The Amazing Spider-Man 2. When speaking to Observer about her design background, she described Academy-nominated Michael Wilkinson as a prime “mentor and an amazing teacher.” She looked back at Wilkinson’s work on Zack Snyder’s 2009 adaptation of Watchmen partially for inspiration, but also to avoid drawing too much from her mentor’s aesthetic—“to make sure I wasn’t doing his design and I was doing my design.” Below, Kasperlik talks about how she interpreted the novel (which she refers to as their “Bible”) to create something new, the technical challenges she faced, and the big reveal.

Jeremy Irons as Lord of the Manor

“Everything is pretty much custom-made for Jeremy Irons’ character, Adrian Veidt. I thought, what would this man, who has insane amounts of money, be wearing in a castle? How would he have his servants dressed? There was a base of 18 to 20 costumes for Tom Mison as Phillips and probably eight costumes for Sara Vickers as Crookshanks. If you watch Downton Abbey, some servants rank higher than others. So we based the costumes off of what the proper rank would be and then moved forward from there. There’s a little CGI element in the many multiples of Mison and Vickers.”

“When we are referencing anyone who’s an original character, we very much took from the graphic novel and wanted to make sure we were paying homage to that. The Ozymandias costume was made by the same people that made the Wonder Woman costume. They created the armor pieces, but we needed to make sure the fabrics underneath were pretty lightweight, so that is dyed linen. That was a lot of fun, [Jeremy Irons] is totally game and will put anything on.”

“The whole point of the costume is that the materials Adrian Veidt i.e. Ozymandias is using should be the materials he has found in his manor. It’s very unconventional; there are leathers, metals, gauntlets and a helmet from a suit of armor. The suit is one of the first things I did because you have to build the suits so far in advance. My illustrator, Christian Cordella, and I worked together very closely. The armor was made at Ironhead—they do a lot of superhero costumes for film. There also has to be a home-crafted version of it, so we did some stuff in-house.”

“The costume is so striking on camera, so it was more about tweaking what was already designed by Sharen Davis [costume designer on the pilot episode] to make it function for the series. The hood was posing a bit of challenge in the pilot, so I put a layer of neoprene in between the lining and the base of the leather, so it would hold its shape on camera. I think we had eight suits, not as many as you do for those bigger superhero films. We made it so I didn’t need to give them a new suit every time there was an action sequence. I added the zippers, so it was easy to get into. We needed to tweak a few things in order to make that happen, so she could get into the costume on camera in episode 2.”

“Regina [King] and I had a long conversation about Angela vs. Sister Night—how Angela could move forward incognito throughout the series and how Sister Night was her separate persona. It’s very important that Angela never wears leather and we made sure to minimize the amount of black she was wearing because that moves into Sister Night territory. There is a scene where she is wearing a black dress, but then she goes into her spy-type persona so black is OK. But we try to avoid it as much as possible to keep the two characters separate.”

The Challenges of the Looking Glass Mask

“In the pilot, they tried to make the looking glass mask a hard mask, but it was challenging for Tim Blake Nelson to move around. When I came on, we used a motion-tracking mask so he never had to wear that hard shell again. The motion tracking and green-screen masks definitely helped give him mobility and functionality. Then they put it in through CGI and that way they could really control what the reflection was. It wasn’t a challenge for the camera in the essence of seeing the reflection, but they needed to make sure they were getting certain angles of the motion tracking because it is printed on spandex. When we didn’t need that CGI element, he had a lamé mask.”

“Pirate Jenny (Jessica Camacho) was so much fun to design for because the only thing that was scripted was her name. With Damon [Lindelof], there’s always a backstory, so we had a little conversation about her character. I didn’t want to make her look like a true pirate. It was Keith Richards rock and roll meets modern punk protester. As with all the other detectives, her face had to be masked, but it is important to still have functionality. What we did is a fishnet stocking and then over her mouth, to mask her nose and mouth, is a scrapbook sticker of chainmail that we ended up cutting into vinyl so it wouldn’t disintegrate. I love using unconventional materials and trying to make it work.”

The Symbolism of a Simple Suit

“We wanted to make sure that Senator Joe Keane (James Wolk) was this attractive man who you think is all politics, but as the series goes on you’re paying a little bit more attention to him. I needed to make sure that his suiting was really simple, clean and classic and it wasn’t over the top. But we made sure, because we were in Tulsa, to give him a cowboy boot. We limited how many ties he has because he is using his charm and making sure he is open to being friends with everyone.”

“Creating the show-within-the-show, American Hero Story, was really fun because it involved making new costumes for the interpretation of an interpretation. We really heightened the color and pumped it up and made it a little bit more of a 1930s fantasy. The vigilantes in the graphic novel make all of their own costumes. It was really important to make sure the costumes looked homemade and not super high tech like some of our DC and Marvel films now.

In American Hero Story, the colors are brighter, the lighting is brighter; everything is heightened and so the lines are a little bit sharper in the design. We went through so many reds! Red is a really challenging color on camera. We also had to make sure for Hooded Justice (Cheyenne Jackson) that the stretch we put into it had enough flexibility for all of the action. After we did that first sequence, we made little tweaks when necessary to make sure everything was really functioning throughout.” 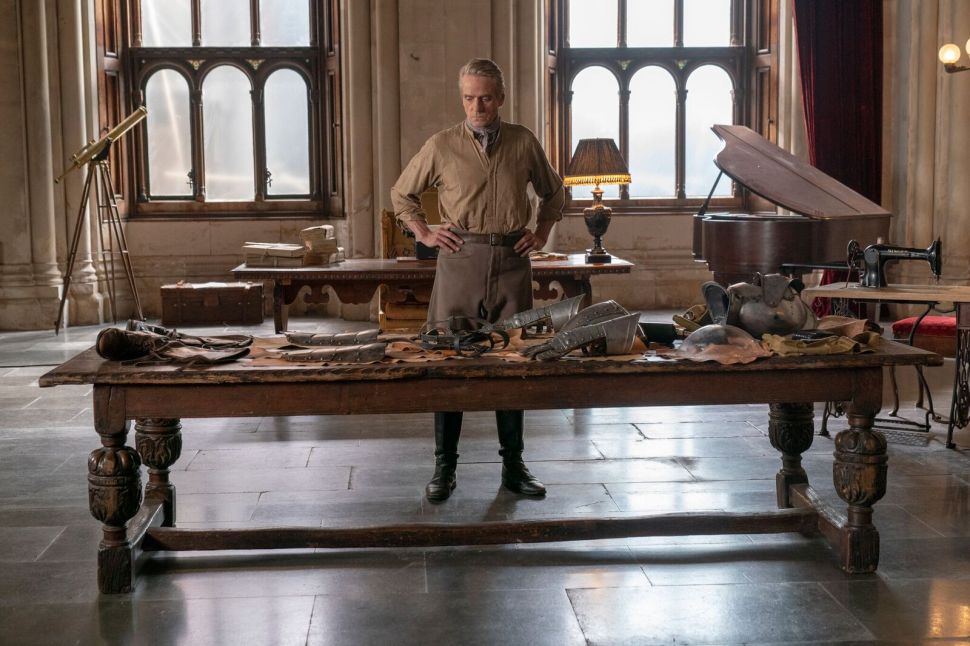