The work of a new and original mind on film is always welcome, and writer-director Trey Edward Shults lives up to the description admirably. Waves is a demanding and absorbing family drama that unfolds in two parts without lines of division, yet both parts are distinctively and stylistically different. The film is too long, but I was impressed and riveted throughout.

Basically, it’s the layered saga of a suburban family with money, privilege and a blueprint for happiness, suddenly plunged into the bleakness of unexpected tragedy—and how each family member copes and moves forward to survive. Everything is going thumbs up for Tyler Williams (Kelvin Harrison Jr.), a good student and an excellent athlete with a star spot on the high-school wrestling team, affluent parents to support him, a girlfriend who loves him and the brightest of futures.

Tyler trains morning and night, but is the stress and strain for himself, or to please his strict, intensely demanding father (Sterling K. Brown)? When Tyler damages his shoulder and refuses the surgery that might endanger his athletic career as the champion wrestler his dad pushes him to be, his worries and self-doubts increase. He’s just a high school senior, but now his future is in jeopardy.

His father ignores his son’s health and pushes him even harder. To increase his anxiety, his girlfriend becomes pregnant and does not want an abortion. Nothing alleviates the mounting pressures like opioids. Stoned and in an uncontrollable rage, Tyler causes an accidental death and his life takes a violent detour. After he is sentenced, the Williams family grieves in their own ways and faces a devastating future. But the film does not end there.

However simple the outline for family drama might seem, director Shults has other plans. The feelings are genuine, but the stylized directorial choices treat them differently from character to character. It’s a strange movie because of its abrupt switches in the narrative and bold changes in focus, from the cynicism of Tyler’s fate to his sister Emily’s optimism, defying everyone’s fear and trepidation and orchestrating her own happiness by falling in love with a decent, caring white boy named Luke (another tender, ingratiating performance by Lucas Hedges).

Emily (Taylor Russell) proves she is made of braver stuff when she travels with Luke to visit his own racially biased father, who is dying of cancer. So we get two films in one—the first half is dark and perturbing, then it morphs into a continuance of the family’s history that turns poignant and sensitive. The point of Waves is that events in a life, good and bad, come in waves. One door closes, another door opens. 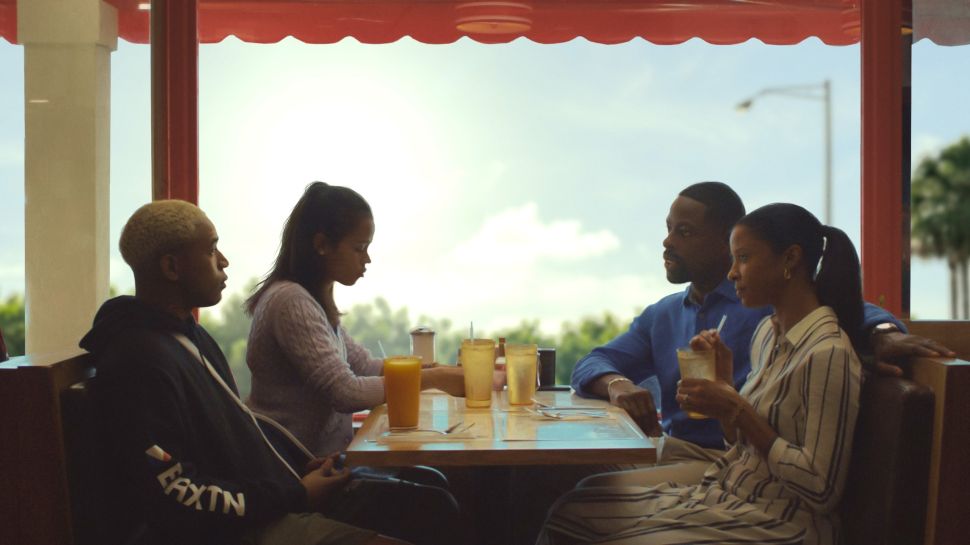