The Brits have humored and horrified us with a number of very British mistakes over the years, with the almost exquisitely bewildering madness of Brexit standing in good company among other blots on a report card that includes the era of British Raj, the Balfour Declaration, the Falklands War and more long-term errors like 11 p.m. pub closures, tepid beer and milked tea.

Another whoopsie that merits its place on any list of British balls-ups befell a small apartment on London’s Broad Street, Soho, in 1809. In those rooms, William Blake—whose reputation as a poet was already well established—put on an exhibition of his artworks in hope of convincing the world that his artistic genius was no less notable than his poetic. The turnout for the event was poor, the buyers nil, and the only critic in attendance inspired to review the event did so with the type of disdain that today would pass for libelous. Embittered by the disaster, Blake would die believing himself a failure, never knowing the esteem and veneration with which his oeuvre would be held some years thereafter.

This fall, in the first exhibition of its kind, Tate Britain will attempt to recreate the scene of the crime, with one room reproducing the chambers where Blake staged the ill-fated event 210 years ago. Other rooms will contain the most complete display of Blake’s original works in over 20 years—over 300 pieces in total—with some of the most famous and iconic images in British art projected on the massive scale Blake always dreamed of with the aid of digital technology.

Art is never approached without context, with a mental landscape not already populated by associations or uncolored by life experience and the times in which we live. As such, the timing of Tate’s Blake exhibition is sure to make it all but impossible for many visitors to avoid projecting onto his works the themes and vagaries of Brexit-Era Britain, something to which they are more disposed than, say, those of Damien Hirst or J.M.W. Turner.

Those who visit the exhibition, for example, will no doubt relate to the strong element of madness present in almost all of Blake’s works (if Blake took LSD and LSD took Blake, LSD would have the bigger trip) given the epidemic of it currently underway just across the Thames in Westminster. But, given that some of the most iconic images on show (The Ancient of Days, for example) are taken from the engravings for Blake’s book, Europe, a Prophecy, that madness instead appears visionary and the prophecy—of a world filled with suffering and chaos curated by a coterie of grim, remorseless idols who, with powers deriving from uncertain origin, seem bent solely upon achievement of this aim—not so far-fetched.

To Matthew Collings of the Evening Standard, indeed, one image of Urizen, Blake’s invented cosmic tyrant, resembles “a Jeremy Corbyn god who rolls the sun along the ground as if he’s rolling away Boris Johnson’s no deal.” And the watercolor Oberon, Titania and Puck with Fairies Dancing almost challenges the viewer not to see the shifty, Machiavellian smirk of the British premier in the face of Puck, “the perplexer of mortals,” nor hear a refrain of the Leave campaign’s “Let’s Take Back Control” as a trio of dithering fairies prance fecklessly to his side. Boris reappears in plate six from Europe in the form of a dark-clad figure tolling the death knell while a trio of unfortunates writhe beneath the inscription “LORD HAVE MERCY ON US,” which to some will parallel the Liberal Democrat Party’s “Bollocks to Brexit” in its futility if not its impiety.

Tellingly, the exhibition opens with Blake’s Albion Rose, the artist’s depiction of the mythological birth of Britain and the work that, more than any other, encapsulates his wish that the British artist be a “source of inspiration and learning…to his own county and ancient glory.” As his forebears stumble ingloriously towards what many deem the symbolic death of that country as a principled and vaguely enlightened world power, the irony and mischievous timing of fate cannot be overlooked.

With the deadline for Brexit fast approaching, the exhibition presents visitors with the chance to atone for the errors of the past—let’s hope it doesn’t take their contemporaries quite so long to do so with those of the present. 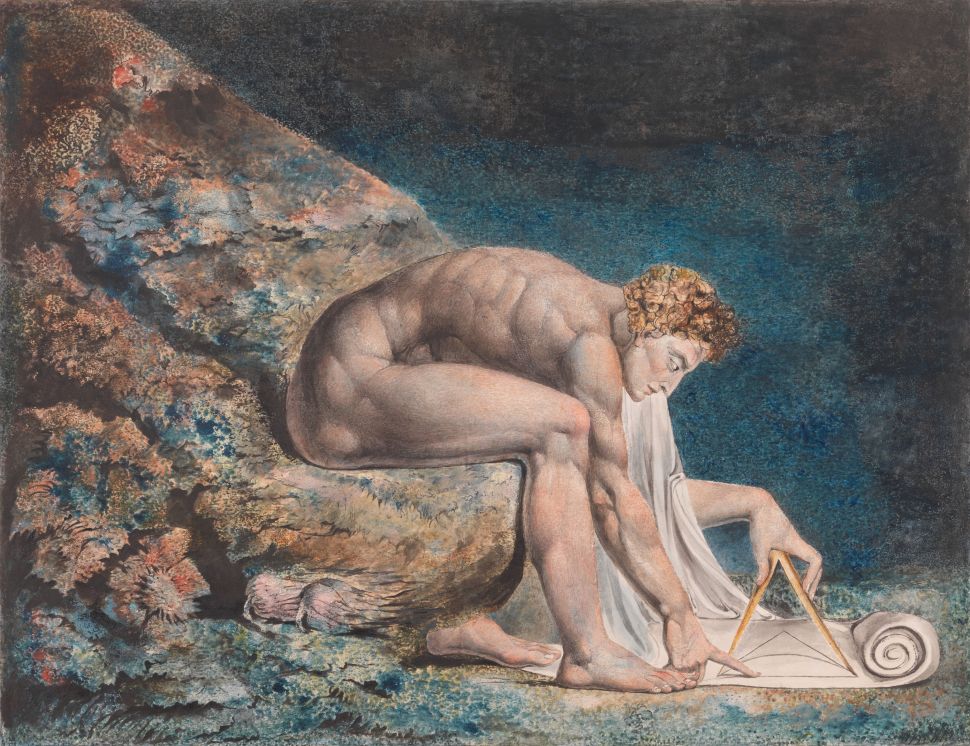