When one thinks about the Macy’s Thanksgiving Day Parade, they can usually conjure a host of mental images that transport a person right back into childhood, when the most magnificent sight you conceive of was a giant balloon shaped like a beloved mascot for a grain and foodstuffs company. However, over the years, contemporary artists and their creations have also found their way into the annual festival commemorating an elaborate turkey dinner, the concept of pageantry and the age-old tradition of feeling vaguely uneasy at a grandparent’s house. This week, the parade will feature a float conceived by Yayoi Kusama, the popular and visionary Japanese contemporary artist who currently has an exhibition up at the 537 West 20th Street David Zwirner location.

Think about that for a second: a float in the Macy’s Thanksgiving Day parade is being deployed to promote not a cartoon character or a snack food brand, but a contemporary artist’s ongoing gallery show. The relative uniqueness of that conceit is both a testament to Kusama’s unforgettable, polka dot-riddled cultural ubiquity and to the enormity of the influence that super-galleries like David Zwirner now wield. It’s predicted that Kusama’s balloon, which is called LOVE FLIES UP TO THE SKY, will be seen by over 50 million viewers all over the country tuning in for the parade. Additionally, the balloon’s design was adapted from a series of paintings begun by the artist in 2009 titled My Eternal Soul.

Since 2005, the Macy’s Parade’s Blue Sky Gallery program has set several different artist visions floating far above the heads of jaded New Yorkers. Balloons designed by Takashi Murakami’s art production company Kaikai Kiki Co. were displayed in 2010, and a trademark Jeff Koons rabbit joined the parade in 2007. Kusama’s design, in contrast, feels more whimsical, mythical and ancient than the more pop-art offerings that have been included in the Macy’s parade in recent years past. Kusama’s contribution is also a little bit unsettling, which makes it a perfect fit for this distinctly American spectacle. 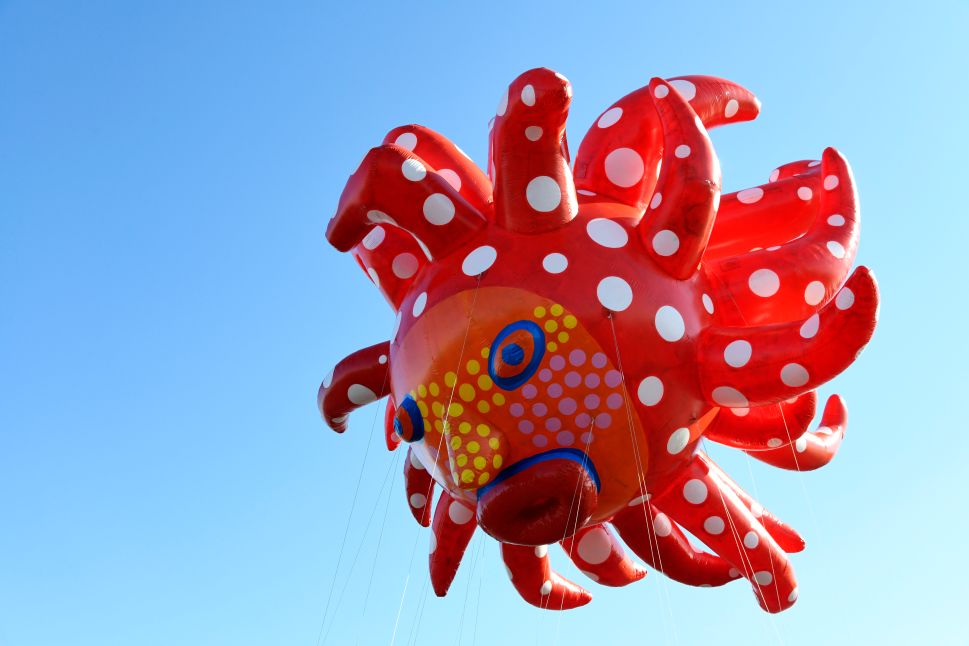