This holiday season, sales at Amazon, as well as its brick-and-mortar retail peers, hit a new record high thanks to an unprecedented Christmas gift shopping craze. But half of those purchases are about to be sent back to sellers, incurring tons of reverse transaction costs, re-stocking fees and everybody’s valuable time.

“December 26. That’s one of the biggest retail days of the year because now everybody got all that stuff they don’t like, so they’re going to take it all back,” Julie Wheeler, president of the Better Business Bureau, told ABC-affiliated WHSV-TV on Thursday.

From Sacramento, California to Rochester, New York, shoppers flocked to local malls on the first business day after Christmas, standing in lines to return the gifts they’d just received but didn’t like. Clothes and electronics were the two most commonly returned items, Wheeler said, the same categories as the best-selling gifts during pre-Christmas shopping season.

According to a survey by the National Retail Federation this year, more than half (55%) of holiday shoppers plan to return or exchange any unwanted gifts within a month of receiving them. And one-third of shoppers say a store’s return policy is an important factor when deciding which retailers to shop.

A similar study by marketing analytics provider Oracle suggests an even higher return rate. Up to 77% of consumers plan to return some of their gifts, and nearly 20% expect to return more than half, an Oracle survey of 15,800 consumers in September found.

A growing number of shoppers who bought gifts online instead of from physical stores in recent years has also put a strain on carrier services. On Thursday, UPS said it expects to process 1.9 million post-holiday return packages on January 2, a peak day which the shipper rightfully named “National Returns Day.”

“This process is a change from years past, when consumers would rush to physical retailers the day after Christmas and stand in long lines to make returns,” UPS said in a press release.

There are even startups that are looking to create a viable business from this process. For example, Flip Fit, a Los Angeles-based e-tailer selling on the concept “making returns a default,” offer to send buyers a box of clothes to try on and share pictures with others before they have to commit to buying.

“Customers validate these purchases with their trusted community… while brands receive actionable real-time data on customers’ buying interests, so they can better predict and stock the items for their target audience,” Jonathan Ellman, founder and co-CEO of Flip Fit, told Observer.

Ironically, though, the post-Christmas gift returns and exchanges are actually supposed to boost another holiday spending craze.

Per a separate National Retail Federation survey, of all the people who plan to return gifts to the malls and retailers, 49% say they go back to the store to take advantage of after-Christmas deals.

“[I’m] hitting up some semi-annual sales, spending the Christmas money I just got that I shouldn’t be spending,” a shopper in Altoona, Penn., told local TV station WJAC on Thursday.

“Just to enjoy the after-Christmas sales and whatever they may have,” said another shopper. 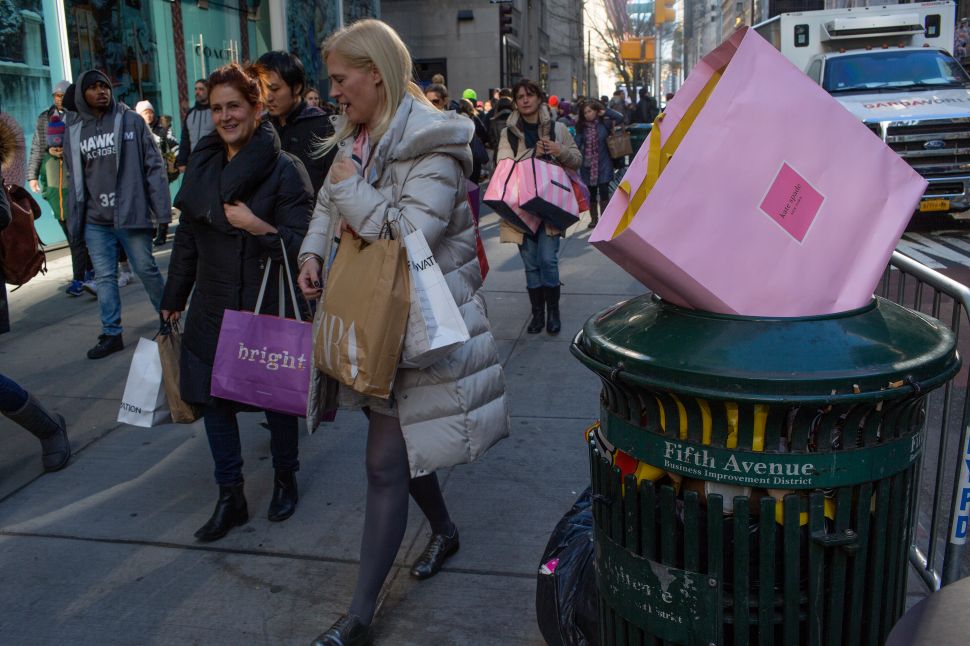