Scanning the defanged, ultrafemme popscape of Ariana Grande, Taylor Swift and their countless imitators, an aging riot grrrl may well despair. Where is the rage? Where is the licking-my-wounds-and-fuck-you self-reliant ethos that made the 1990s an exciting place in rock, when Lilith Fair spread killer hooks across the land? Liz Phair, Sheryl Crow, Tracy Chapman, Natalie Merchant—they showed that you can own your talent and your beauty, not be a corporate commodity or eye candy with a microphone. Where are the troubadours who dare to be as messy and unappeasably wrathful as Alanis Morissette, spilling her guts onstage and then reading the steaming intestines, like the ancient Roman haruspex?

Oh, there she is: Lauren Patten as Jo, a supporting character in Jagged Little Pill, the Broadway musical built around (and mostly, under) Morissette’s megahit 1995 album. More than halfway through the show, Patten takes center stage to sift through the debris of her shattered heart, smashed into pieces by the woman she loved and thought loved her. As Morissette’s witchily gleeful anthem to scorned passion builds and spins to its ecstatic spray of vitriol, Patten rocks on her heels, doubled over in agony, a huge voice blasting from a small frame as her shaking hands flutter from belly to throat, as if trying to coax the poison from her system. “And I’m here, to remind you / Of the mess you left when you went away”—come on, sing with me—“It’s not fair, to deny me / Of the cross I bear that you gave to me.” And holy shit, you are twenty-three again and angry as hell in baggy flannel top and ripped jeans and life might suck but at least you know it sucks. Patten’s visceral exorcism, under stadium kliegs, surrounded by air-punching dancers furnished by director Diane Paulus make “You Oughta Know” the highlight of the musical—while also pointing up the flaws in everything around it.

When actor and hit song meld so flawlessly at such skin-prickling moments, it makes you realize what an impossible if noble project Jagged Little Pill is. The musical’s score (orchestrated and arranged by the marvelous Tom Kitt) is based primarily on the 12 tracks of the title release and supplemented by later Morissette recordings (such as “So Unsexy” from Under Rug Swept and “Unprodigal Daughter” from Feast on Scraps). What comes across, not surprisingly, is how every song is so bound up with the persona crafted by Morissette over the years. The challenge any jukebox musical faces is ventriloquy: how to transpose a song so closely identified with one voice into another’s mouth. Morissette didn’t write character or story tunes, exactly; she howled or crooned or purred from her wise, broken self. When Jo sings, we believe it’s coming from deep within. But when a middle-aged father hooked on porn warbles, we struggle to care.

With an often funny and tight book by screenwriter Diablo Cody (Juno), Jagged Little Pill grounds its narrative in present-day suburban melodrama. The Healy family offers one-stop shopping for contemporary malaise: Controlling, withholding supermom Mary Jane (Elizabeth Stanley) is addicted to painkillers in the wake of a car accident. Adopted African American teenage daughter Frankie (Celia Rose Gooding) is restless and sick of what she perceives as her parents’ white savior complex. Overachieving golden-boy Nick (Derek Klena) has gotten into Harvard but is empty inside. And lawyer dad Steve (Sean Allan Krill), emotionally estranged from Mary Jane, vents his sexual frustration on wank videos. In other words, the Healys are full of hurties, and no one’s talking about it. When Bella (Kathryn Gallagher), a classmate of Frankie’s, is raped while drunk and semi-conscious at a party, with Nick a possible witness, the crime catalyzes the family members’ repressed traumas, addictions and fears.

Frankie and Jo (Patten) are gal pals who enjoy making out, but Frankie’s eye wanders to dreamy classmate Phoenix (Antonio Cipriano), and they rush into bed. Jo stumbles across the pair in flagrante dilecto (Latin for hooking up). Frankie’s cavalier handling of Jo’s heart prompts the “You Oughta Know” lash-out. Mary Jane, spiraling downward in her worsening habit, urges Nick not to talk to police, which might imperil his acceptance to Harvard. Steve urges Mary Jane to go to a marriage counselor. Frankie, disgusted by her parents’ overprotectiveness and hypocrisy, runs away from home. We learn that Mary Jane survived a sexual assault in college decades ago, and never dealt with it, which explains her present-day obsession with perfection and control, with the underside of self-destructive pill-popping.

Cody is too skilled and confident a writer for these story threads not to line up neatly and weave together for effective tension and release. And while dysfunction in suburbia is an overdone trope, it’s not going away anytime soon, just as the sociopolitical laundry list—interracial adoption, white privilege, climate change, opioid crisis, rape culture—will endure. And Paulus directs with tremendous style and emotional power, balancing Morissette’s lyrical earnestness against Cody’s salty irreverence.

But all this talent founders on focus. Cody and Paulus fracture the feminine POV into four parts: Mary Jane, Frankie, Jo and Bella. I understand why they did this; it helps spread the weight of trauma and story, ward off bathos and an aftertaste of cliché. But it also dilutes the power of having a protagonist whose journey you follow with the sort of intensity and fidelity that provides the release that only comes, again, with the sheer, freaky force of “You Oughta Know.” Is this Mary Jane’s story? Often, it is—we want to know if she will become a statistic in the Oxycodone crisis. But isn’t Frankie our hero, a smart, fearless woman of color with divided loyalties? Queer and resilient Jo is hilarious and deep, and I could watch her all night. And Bella’s tragedy is horrific, yet she fades into the background, a ghostly victim. Too often you find yourself asking: Whose story is this? If the Morissette catalogue must be parceled among four personas, then drill down on that, and trim away excess narrative and satirical gestures. An all-female cast would have been equally plausible.

A more positive way to spin the situation is to say, Jagged Little Pill is an embarrassment of riches, just heaped in an ungainly pile. In many areas, it is. The cast is enormously appealing, with Stanley doing outstanding work as a mother who can be narcissistic, shallow, and horrid, but whose journey to the bottom is truly heartbreaking. How an actor so healthy and fresh can grow gaunt and haggard on command is a marvel. Gooding, as the brash, no-wave feminist in search of herself, is pure charisma with a pop belt to die for. Patten (whose DNA was clearly spliced from Laurie Metcalf and Bebe Neuwirth) is an instant star. Klena and Krill have less to do, but they do it quite well.

And I haven’t even brought up the blisteringly good choreography by Sidi Larbi Cherkaoui, full of whirling fists and slicing kicks. Cherkaoui blends grunge party stomps, military formation, and hip-hop to create the physical equivalent of Morissette’s folk-punk war cry, and the beautifully individualized chorus launches into the dances with inspiring kinetic bravery. (Whipping her hair and thrashing to the beat, Ebony Williams puts an extra r in riot grrrl.) Dancer-actor Heather Lang gets a couple of solo moments in two of the more vividly staged sequences—the reenactment of Bella’s rape, and in an overdose hallucination that sends Mary Jane over the edge. In both scenes, the willowy yet muscular Lang is deployed as a body double, her lanky frame listing and crashing drunkenly at a party or tumbling over a couch in a pharmacological haze. When the music and the movement join in such abstract purity, you wish the creative team had slipped the shackles of narrative convention and feel-good resolution more, pushed deeper into the songs and their varied terrain of ambivalence, doubt, flirting with despair. As it is, this pill is too whole and smooth, coated ever so slightly with sugar. 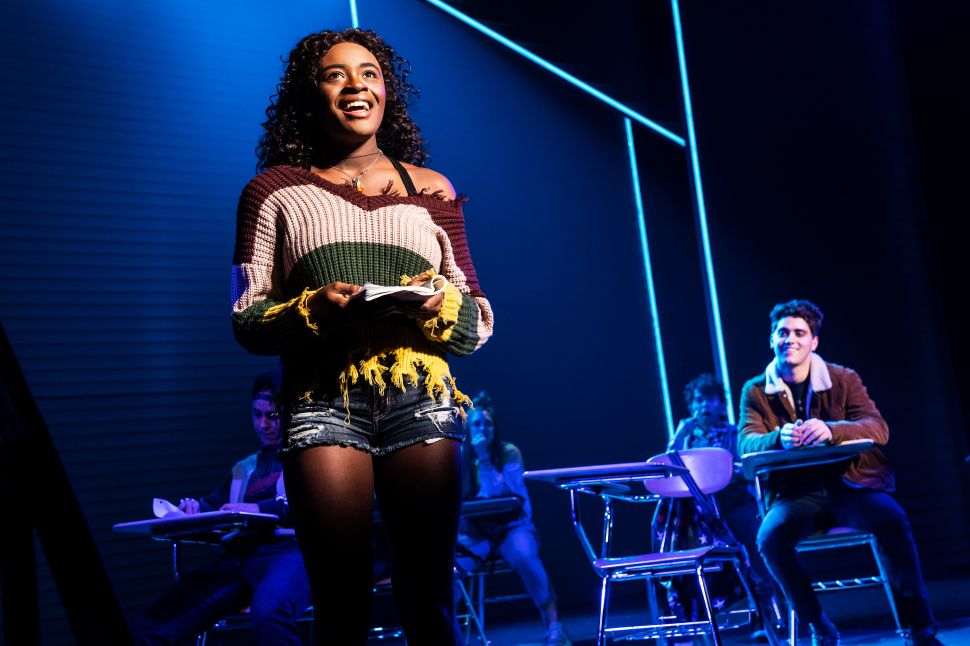