Apple CEO Tim Cook doesn’t update social media often. But in the past two days, the Apple chief executive has been on a Twitter marathon broadcasting his visit to Japan, where he met and greeted local Apple employees, key pop cultural figures and app developers of all age groups—from as young as 13 all the way to 84 years old.

On his first day in Japan, Cook met with the 84-year-old Masako Wakamiya, the world’s oldest app developer who released her first iPhone app in 2017, and 13-year-old Jun Takano, who’s believed to be the youngest in her profession.

“What a treat to reunite with Masako san and Hikari san, some of our imaginative developers who prove that no matter your age, coding opens up new opportunities to follow your dreams!” Cook tweeted on Sunday, shortly after arriving in Tokyo.

Cook had previously met with both Wakamiya and Takano in the U.S. at the 2017 Apple Worldwide Developers Conference (WWDC), where Wakamiya discussed the iPhone’s usability issues for seniors with the Apple CEO.

“I explained to Mr. Cook that smartphones are not designed for senior users, some of whom have trouble hearing and seeing,” she told The Japan Times in a 2018 interview.

The latest meetings took place at the Apple Omotesando store, which opened in 2014 and recently completed a major renovation.

Later in the day, Cook had a meal with Japanese singer-songwriter Gen Hoshino, who was the first Japanese DJ on Beats 1, and visited Keio University’s School of Medicine to learn about how doctors have made use of Apple Watch and CareKit.

On Monday, Cook continued his journey with a visit to the newly opened Apple Marunouchi store, the country’s largest, where he met with students from a local primary school. He then stopped by Seiko Advance, an Apple supplier, and the office of celebrity anime special effect artist Shinji Higuchi to see how he uses the iPhone 11 Pro Max to create artwork.

These meticulously planned meet-and-greets are an important part of Cook’s job as the chief executive of the world’s most valuable tech company. During his eight-year tenure, he has visited many key Apple markets, including China, Canada, France, Germany, Ireland, Italy and the UK.

こんにちは Tokyo! It’s wonderful to be back in Japan! 🇯🇵 #shotoniPhone by Koichi Mitsui pic.twitter.com/Kt5VlyA2VI

What a treat to reunite with Masako san and Hikari san, some of our imaginative developers who prove that no matter your age, coding opens up new opportunities to follow your dreams! Wonderful to see you at Apple Omotesando! pic.twitter.com/YAr4M6jSXw

Wowed by the many talents of Gen @gen_senden. Thanks for showing me how you bring your creative vision to life in the studio. Loved the izakaya too! Have a great show tomorrow! 楽しかったです！ 🏮🎶 pic.twitter.com/Seqzd9Pkme

Technology is pushing the boundaries of healthcare, enabling innovations and discoveries at a pace we‘ve never seen before. It’s amazing how Dr. Kimura and experts at Keio University School of Medicine use Apple Watch and CareKit to help patients better understand their health.⌚️ pic.twitter.com/ssqNurYJ6T

Impressed with how @TimeTreeApp_jp helps millions of customers around the world manage their busy lives. Great to see you’re using Sign in with Apple—so important when you have sensitive information in your calendar like where your loved ones are. And that Dark Mode looks great! pic.twitter.com/PdV3nOgrjO

It’s always wonderful to be with our Apple family in Tokyo! みんな、いつもありがとう！ pic.twitter.com/efpJ2M3jXa

Coding is one of the most important skills you can learn. Loved celebrating Computer Science Education Week with students from Rikkyo Primary School at Apple Marunouchi! 🇯🇵 #TodayatApple pic.twitter.com/lBv78PRGxk

Seiko Advance is a great example of our invaluable suppliers here in Japan. Thanks to their craftsmanship and attention to detail, the gorgeous colors of iPhone 11 Pro really come to life! pic.twitter.com/PFEuXo7Fy0

TOHO Co. has been on the cutting edge of special effects for decades. Amazing to meet Shinji Higuchi san and learn how he uses iPhone 11 Pro Max to bring his creative vision to the screen. Can’t wait for the world to see Shin Ultraman! pic.twitter.com/OFF6VEWT9q 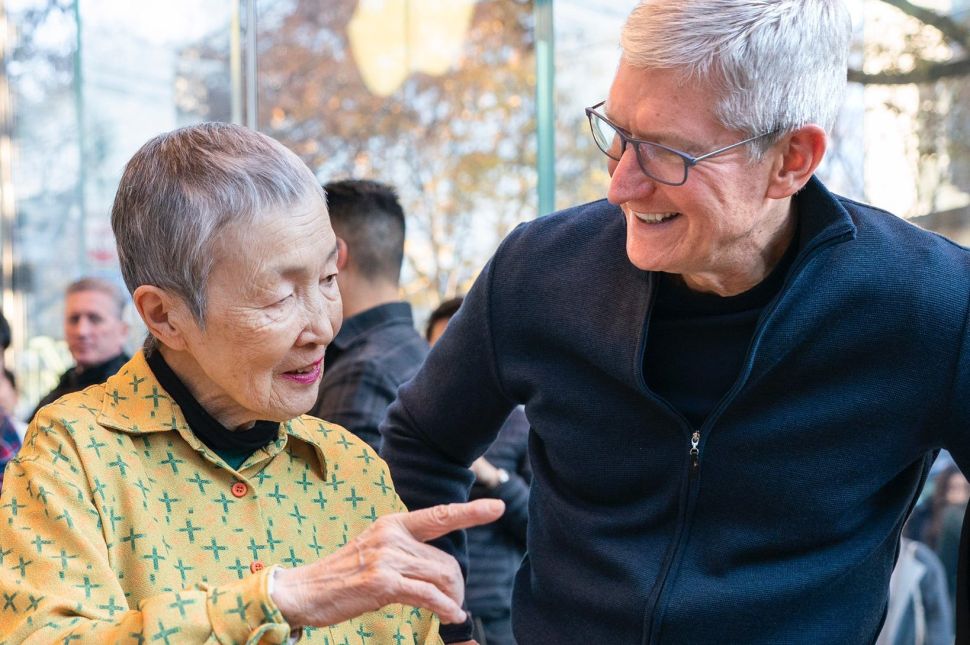