“You have to deliver before the holidays” says the art dealer who just closed on a sale at Art Basel Miami Beach. It is December 9. The work is still wet, needs a crate, and the airlines are getting booked up and the likelihood of fulfillment rapidly diminishes. This is what we often hear from our customers during Miami Art Week. Holiday shoppers often cut it close with last-minute gifts, but the advent of online shopping has changed expectations for gift ordering, with assured delivery dates on sites like Amazon luring many into a false sense of security. Collectors shelling out six and seven figures might not understand that the delivery of art doesn’t work quite the same as with ecommerce giants; they want what they want when they want it. Saying no is an option, but in the highly competitive field of art logistics, there are only so many clients to go around, so you either roll the dice, or you have something the other guy doesn’t.

Some years ago, we went up against the holiday clock with the added delivery complications of live plants and a small island location to contend with. The work by a contemporary artist was composed of tropical air plants nested in three large plexiglas letters mounted to a wall. The letters, spelling S-E-X, were packed in a large case and for the journey from origin to destination by climate truck, we were asked to mist them, keeping the contents alive. The day of the gala at which they were being displayed, a rep from the gallery called me and asked if we could transport the work to a prominent collector in time for their holiday party. Knowing the collector resided in Europe, I was confident we could manage this as we had pre-booked a healthy amount of capacity with one of the more reliable all cargo carriers. As long as we could make an appointment with the USDA in time (the plants would require something special… more on that later). As fate would have it, the actual destination was not Europe. The collector had a fabulous vacation home on Mustique, an island in the Grenadines, and I was getting ready to say no.

The issue with access on an island is often dictated by the size of the runway and the equipment regularly scheduled to land there. In this case, the only flights available to Mustique are twin otters, small utility planes incapable of handling the size of the art work in its travel case. Ocean transport would be possible, except the duration of the journey would compromise the life of the plant component. I also knew that if I couldn’t promise delivery in time for the collector’s big party, I’d lose the job to a competitor. So, what to do?

I put our freight forwarding (FF) department on the case, who discovered the most ideal routing, with only one stop—a connection in Barbados. That’s when I knew I had an ace in hand. While FF booked an appointment at the USDA’s Animal and Plant Health Inspection Service to get a phytosanitary certificate allowing the art work to travel internationally, I called an employee at our NY office who was formerly a policeman in Barbados. He was able to connect me with people who could expedite the transfer of cargo, facilitate the necessary quarantine issues (again, with the plant-based art work), and even coordinate the removal of seats from a chartered twin otter that could accommodate the modified crates (we separated the three letters into smaller, individual cases with vents).

The sale of the artwork was contingent not only on getting the artwork to the island in time, but also getting it there at a reasonable cost. The other option would have been to charter a flight directly from Miami to Mustique, but that would have been far more expensive than this solution (the chartered plane from Barbados was only $1,800), so with my plan in order, I contacted my client’s registrar. We got the green light.

Meanwhile, FF submitted the list of 7 separate plant species to USDA APHIS. There was a bit of excitement on that end as the officers reported that one of the plant genera was new to their database. After the close of the fair, we packed the works in the new cases, sent them to the APHIS “fog house” to clear for any pests, and booked the flight to Barbados. 18 hours later, we received word from the collector’s caretaker; SEX was safely on the beach. 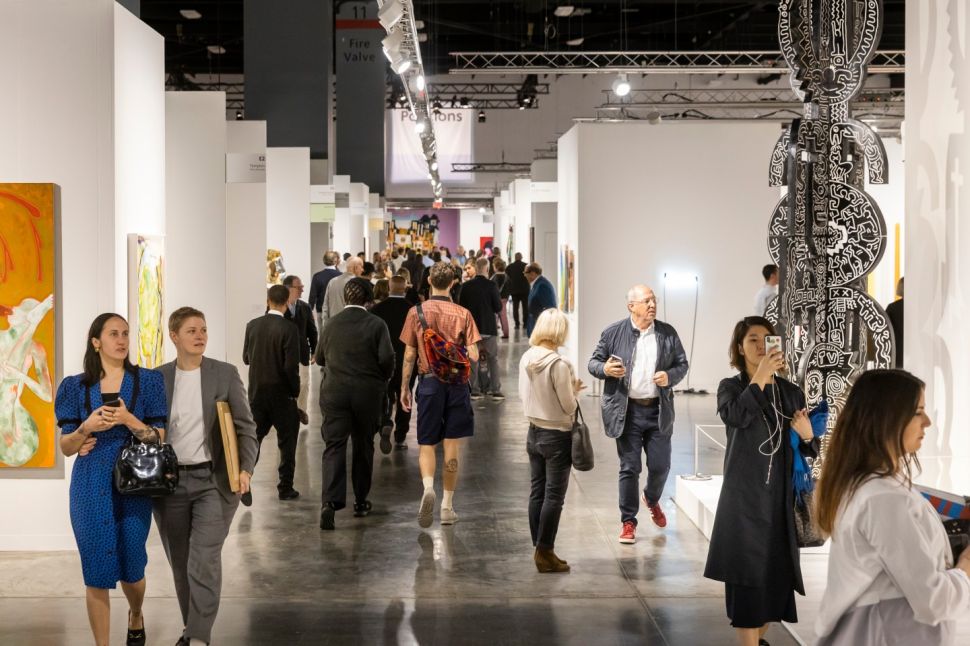