At the entrance of the new Met show, “Arte del Mar: Artistic Exchange in the Caribbean,” wedged into a blue-walled space in a wide corridor, stands a dark wooden statue of a grimacing man with white inlaid teeth.

There is a temptation to see it as African, like some of the work exhibited near the pocket-sized exhibition. Curator James Doyle pointed out some resemblances. “It is a hardwood sculpture of a figural anthropomorphic person with outsized proportions,” he said, taking a break from installing the exhibition.

The similarity ends there. This figure is a rare sculpture from the Taino culture of the Caribbean basin, from 1000 A.D., and was probably hidden in a cave, which accounts for its strikingly good condition.

The show’s title, “art from the sea,” refers to the Caribbean territory of islands and shorelines where the Taino civilization flourished and traded before the Spanish arrived in the late 15th and early 16th centuries.

Scant physical evidence remains of the Taino, who had no written language. Yet the 42 objects in the gallery have a mute eloquence, despite the huge gaps in our knowledge about their cultures.

“I really wanted to focus in the visual story on connecting the Taino civilization in the Antilles with their peers along the coastline,” Doyle said.

Wood decomposed quickly in the tropical climate. The Met is fortunate to have four hardwood sculptures on view, including the figure at the entrance. Another is an elongated figure, legs crossed, with a flat section at its center, which is labeled as a ceremonial chair. It is small for any human to sit in, said Doyle, and may have actually served as a ritual platter.

The use of the many of the objects on view remains a matter of speculation. Questions linger about two heavy collars carved in stone, decorated with sculpted patterns and human-like faces.

The collars are not mentioned by Friar Ramon Pane, a Catalan friar who accompanied explorers and wrote of the Taino areitos, performances in which singing was accompanied by percussive rhythms. The collars could have been hidden from the Europeans or, as Doyle speculates, “most likely they were durable versions of cloth or leather belts or collars that would have been part of rulers’ regalia.”

The Tainos also worked in pottery, which survived over centuries better than wood. Two of those works are the standouts of “Arte del Mar.”

“Heart-Shaped Bottle with Phallic Spout’ (Potizo) stands almost twenty inches high by seventeen inches across. Its description as heart-shaped does not do justice to the life that seems to exude from the object’s earthen reddish surface. A dark, splotchy form on it seems more natural than designed. The irregularly proportioned bottle dates from 1000 to 1500, but definitely before European contact. If the heart doesn’t quite beat, it certainly breathes. This object, in itself worth a visit to the show, will make anyone want to see more of Taino culture.

Nearby is a 4th-5th century standing vessel found in Panama, eight inches high, with a series of figures painted in a horizontal line. On a close look, the figures seem archaically stylized, and remarkably modern, as if you were seeing them in Keith Haring’s graffiti on the subway from the 1980s.

“It’s one of the rare depictions of an actual ceremony,” said Doyle, “I call it our Panamanian Keith Haring.“ Acquired in 2007, it has never before been exhibited.

On the back wall of “Arte del Mar,” past golden pendants in the form of eagles, yet always visible through the glass vitrines that lead you there, is a large earth-toned canvas by the Cuban Afro-Chinese artist Wifredo Lam (1902-1982).

Rumor de la Tierra (Rumblings of the Earth) from 1950 is a grouping of bird and bat shapes against a black-brownish background. A hint of metal and danger comes from a sharp knife grasped by one of the creatures.  With some figures represented in parts rather than whole, and without a clear center, the picture has been compared to Guernica, 1937, by Pablo Picasso. While monumental in its size, the Lam canvas offers something intimate in its seductive darkness.

The work is on loan until the end of 2020 from the Solomon R. Guggenheim Foundation, just up Fifth Avenue. The Met owns a Lam that Doyle considered exhibiting, but it is a gouache on paper, which could not be shown for the duration of the exhibition, and it is vertical, which would not have given the show its cave-like effect. (Bear in mind that many of the Taino works were preserved from pre-European days in the Caribbean because they were hidden in caves.)

“I love the earth tones,” said Doyle, “the real point of this section was to build a bridge to the present.”

Centuries later, with that strong parting dose of surrealism, the artistic ecology still pulls you in. 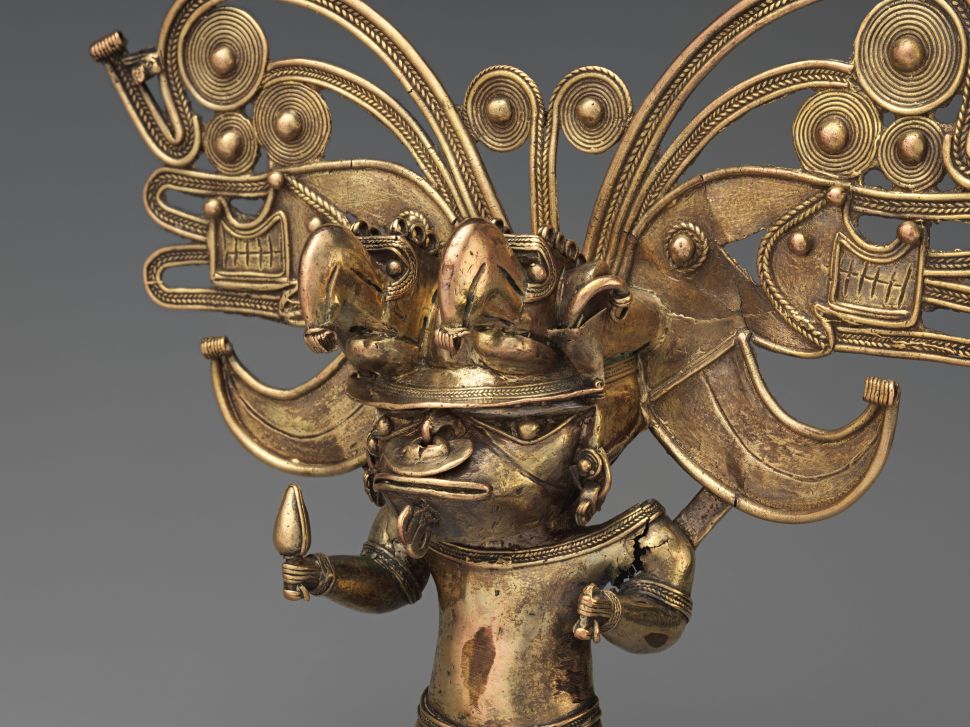