For better or for worse, there’s perhaps no one sole figure who better reflects the state of the art world today than Banksy, an illusive, multidisciplinary figure whose random acts of graffiti and auction house performance art consistently gesture towards political relevancy without actually touching it. Banksy’s latest move, tied cannily to the holiday season, is a Christmas-themed one: within the town of Bethlehem in Palestine, the artist recently debuted a piece called the Scar of Bethlehem that features a Nativity scene conducted in front of a tall, grey wall with a huge hole scorched through the middle. The artwork is on display at the Walled Off Hotel, an “art hotel” financed by Banksy and established in Bethlehem in 2017.

According to Bloomberg, a great deal of tourists in town for the peak Christmas season made their way to the hotel over the weekend to see Scar of Bethlehem, which is surrounded in the building by many other works by Banksy. The hotel itself is also positioned directly adjacent to an Israeli security barrier, one of many that comprise the wall built by Israel decades ago during the Second Intifada. Although the Walled Off Hotel operates on one of the most volatile political fault lines in the world, the establishment’s website insists that it is an “entirely independent leisure facility set up and financed by Banksy,” and “not aligned to any political movement or pressure group.”

This work serves as perhaps the best example of the fact that Banksy’s artistic intent has always been provocation and only provocation, not genuine advocacy for change or any desire for a definitive stance. Scar of Bethlehem turns the continual subjugation of Palestinians into visual fodder for art-seeking tourists, and it does this within an opportunistic hotel business built for people who wish to engage with the trauma around them from a safe distance.

On Monday, Vox also reported that Israel’s settlements, the separation wall and the popularity of Christianity-related tourism have collectively had a severely negative impact on Bethlehem’s economy. “Bethlehem is known to have one of the highest rates of unemployment within the West Bank,” Suhail Khalilieh, the head of the Settlements Monitoring Department at the Applied Research Institute in Jerusalem, told Vox. “The price of land and [the] cost of living has skyrocketed beyond imagination, mostly because of tourism. [The prices may be] good enough for tourists, but for the people of Bethlehem, it’s really expensive considering the income. We are being suffocated in terms of where and how we live, so the thought of immigrating is not far off from the minds of many people.”

Banksy’s work might have aimed for a poignant note, but what it drew attention to was how even a well-meant gesture can fail entirely when it doesn’t take into consideration the circumstances around it. Context was meant to be everything in this piece, making the misstep only that much more glaring. 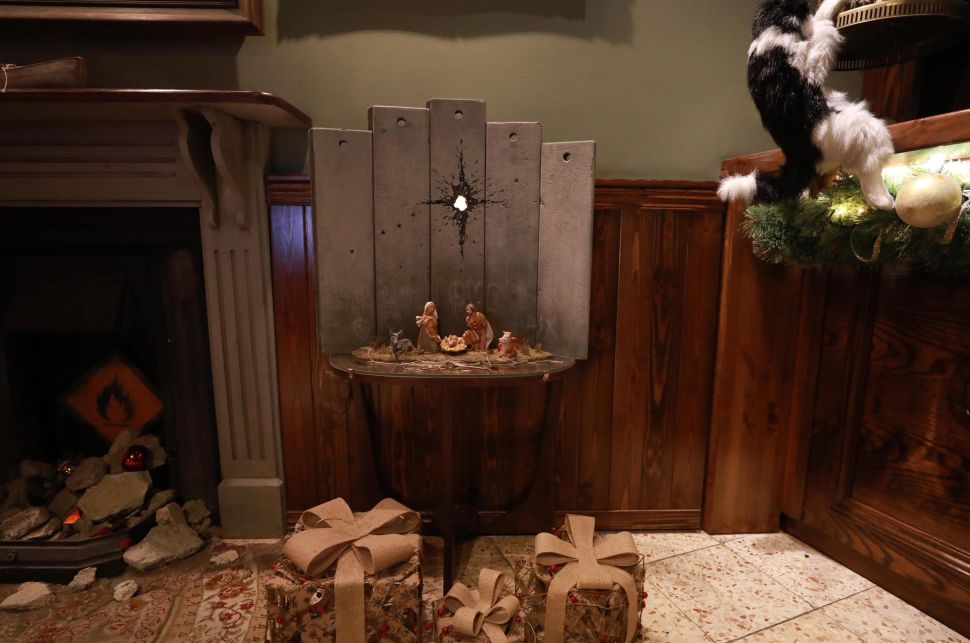