A Michigan woman who participated in this year’s Reddit holiday gift exchange just found out what it’s like to have Bill Gates as Secret Santa.

The lucky girl, identified as Shelby, received an 81-pound gift box from the billionaire this week. The box was so big that she had to open it at her local FedEx and wrap the presents individually to fit them in her car.

“I always thought it would be super cool to be matched with him some day, but I never really would have expected this to happen to me,” Shelby, 33, told MarketWatch.

The content in the goodie box was fully customized to Shelby’s interests and hobbies based on research done by Gates’ team beforehand.

The best of all, however, was a bound manuscript of F. Scott Fitzgerald’s The Great Gatsby, of which Shelby is a loyal fan. The manuscript even came with (scans of) the author’s handwritten notes as he was writing the novel.

“The Great Gatsby is my favorite novel,” Shelby told MarketWatch. “I had some lines from Great Gatsby in my wedding vows. So this really is a special book to me. And it is the most fancy book I have ever seen. It almost feels like it needs a case with a spotlight to display it.”

“Bill really did his research,” she added, noting that she already owns the two Lego sets. “As for everything else, they are 100% what I would have bought for myself.”

In addition to the material presents, Gates also made an undisclosed donation to the American Heart Association in honor of Shelby’s mother, who passed away in March.

“I know no gift will ever make up for losing someone so important to you,” Gates wrote to Shelby in his gift note. “I was very sorry to hear about your mom and I’ve made a donation to the American Heart Association in her memory. I hope you and your family find your new normal this holiday season.”

“Your donation to the American Heart Association in my mom’s memory is the most special gift of all. It means more to me than I can express,” Shelby wrote to Gates on Reddit. “This year has been a complete rollercoaster of emotions for me… It has been hard to drum up holiday spirit this year, and this has been a taser of Christmas cheer.” 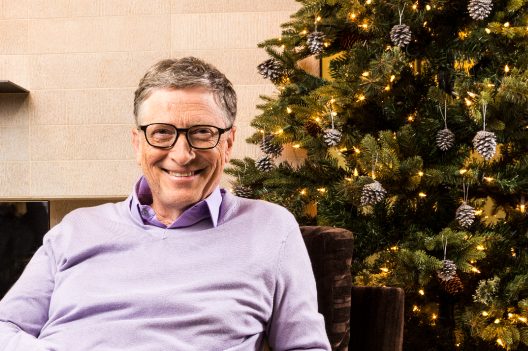