Heroes dominate the movie marquees. I think it’s time for a few genuine villains. So I welcome heartily (and hardily) this year’s films about such creeps as the monstrous hypocrite lawyer and Donald Trump idol Roy Cohn in the documentary Where’s My Roy Cohn?, the gangsters in The Irishman, and deposed and disgraced Fox News CEO Roger Ailes in Bombshell.

Bombshell is about the women who discovered and embraced the #MeToo movement in time to publicly accuse the founding head of Fox News of the sexual harassment in the workplace that ruined the repulsive titan. It was a perfect example of abusive power in the hands of the wrong people and an early screw in the foundation of women’s rights when two Fox reporters, Megyn Kelly (Charlize Theron) and Gretchen Carlson (Nicole Kidman), decided they were fed up with being groped, kissed, fondled, and falsely flattered for sexual favors by their boss, and filed a complaint. The notoriety catapulted one of them, Ms. Kelly, to a show of her own. She has since been fired herself. The beat goes on.

Roger Ailes, played with aggressive and obnoxious superiority by John Lithgow, replete with bobbing jowls, was Rupert Murdoch’s pit bull. He’s the one who demonized anyone dedicated to protecting the U.S. Constitution and whose political pressures restricted all Fox employees from what everyone calls freedom of the press. To the women at Fox News hoping for a promotion, his motto was “You wanna play with the big boys, you gotta lay with the big boys.” The film concentrates on Megyn’s efforts to recruit a mob of Roger Ailes’ other victims (all conjoined in one fictional character named Kayla Pospisil, played by Margot Robbie) to join her in her lawsuit, and it reveals, in the process, the length to which so many female Fox employees were willing to go in their pursuit of ambition–and greed.

It’s a subject worth investigating. The three women are as riveting as always and they are surrounded by surprise “guest” appearances by Malcolm McDowall as Rupert Murdoch, Allison Janney as Ailes’ lawyer Susan Estrich, Mark Duplass as Megyn’s husband, and a gang of less familiar faces playing Rudy Giuliani, Bill O’Reilly, Greta van Susteren, and other television news personalities. The problem is, for a story so rife with pungent possibilities, the script by Charles Randolph is dry as a bone and Jay Roach’s direction goes out of its way not to make anyone at what remains of Fox News mad. The result seems to tiptoe around the even juicier chance to tell the dirty behind the scenes stories that could have made this story a real bombshell indeed. 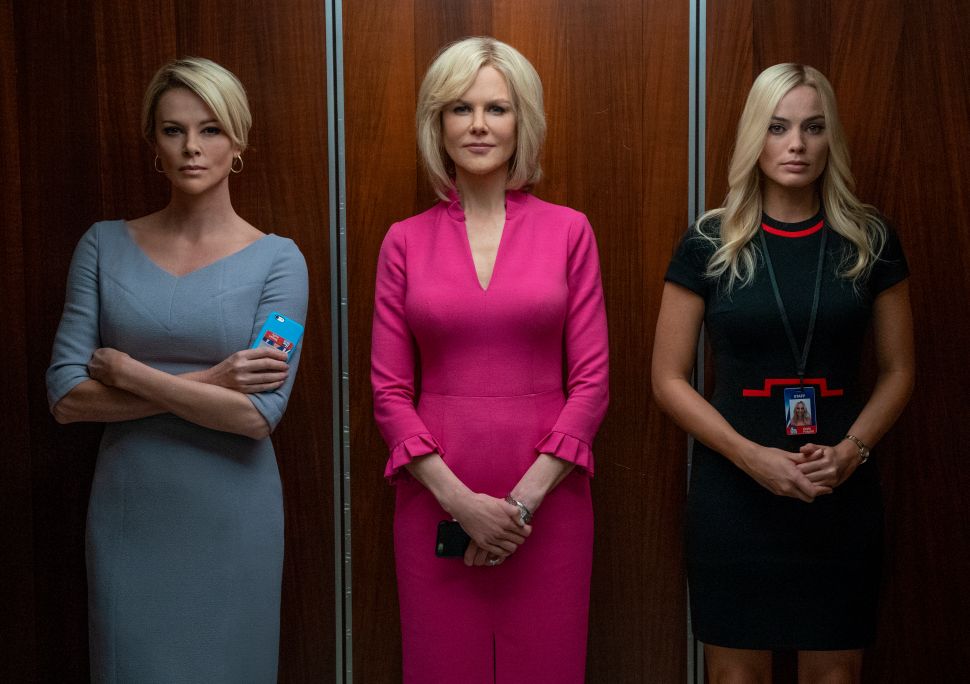